“A Bad Moms Christmas” has the shoddy look and frantic feel of a slapped-together, cash-grab sequel, because that’s exactly what it is.

It arrives in theaters a mere 15 months after the surprise hit “Bad Moms,” which made about $184 million worldwide – a huge number for a female-driven comedy in the middle of summer blockbuster season.

And so of course there’s a second “Bad Moms” movie, which hits all the same beats and themes as the first “Bad Moms” movie, only now we have double the moms because the moms of the moms have shown up to wreak even more mom havoc. Plus it’s Christmas, so they’ve thrown in all the usual clichés about how this is not, in fact, the most wonderful time of the year.

This also happens to be the exact same premise as the upcoming “Daddy’s Home 2,” another sequel nobody needed featuring the dads of the dads. (Inter-generational holiday hilarity surely will ensue.) For now, though, we must struggle mightily through the sight of veteran comic actresses trying to make the most of the weak, one-note material they’ve been given.

Every once in a while, “A Bad Moms Christmas” finds the elusive, raunchy-sweet balance that made its predecessor a success, mostly courtesy of the on-screen mother-daughter duo of Susan Sarandon and Kathryn Hahn. But while returning writer/directors Jon Lucas and Scott Moore have replicated the structure and shock value of the original, they’ve left out the fundamental truths about motherhood that gave that film substance.

The three ladies at the center—Amy (Mila Kunis), Kiki (Kristen Bell) and Carla (Hahn)—were recognizable in their anxieties about trying to be all things to all people at all times, and their friendship provided a much-needed connection and catharsis. But “A Bad Moms Christmas” renders their bond and many of the film’s antics in the laziest way possible: through slo-mo montages of their drunken destruction. There are about a half dozen—in the mall, at the indoor trampoline place—scored to loud rock or pop songs. They are filler. If you’ve seen one, you’ve seen them all.

Along those lines, each actress is stuck in her character’s own specific lane for nearly the entirety of the film—with the moms’ moms going to even more wacky extremes—until just about the end, when the story does an emotional about-face and decides to be a tearjerker. Kunis in particular gives it her all and shows surprising range in these moments, but the script hasn’t laid the groundwork to get us choked up along with her.

We know from the start, though, that this Christmas has been a debacle. A flashback to six days earlier reveals that Amy, Kiki and Carla’s mothers have arrived, ostensibly to celebrate the holiday with their families. But they’ve brought emotional baggage along with gifts for the grandkids, dredging up decades of insecurities and resentments.

Amy’s mom is the condescending and controlling Ruth (Christine Baranski), who thoroughly disapproves of her daughter’s homespun holiday efforts and instead insists on an expensive extravaganza. (Baranski, of course, can do this kind of diva routine in her sleep, and she’s one of the few consistent sources of genuine laughs.) Kiki’s mom is the needy and clingy Sandy (Cheryl Hines, in the least developed role of all), who wants to be best friends with her daughter and has trouble with the idea of personal space. And then there’s Carla’s mom, Isis (Sarandon), a degenerate, drunken gambler who’s largely been absent and only shows up when she needs money.

In no time, the pressure of living up to the archaic notion of creating a perfect Christmas, magnified by the stress of having their mothers around, causes our moms once again to say: “Screw it.” And that’s about the entirety of the film: escalating mayhem within the genteel confines of suburbia, a concept that has been mined repeatedly—and more shrewdly—in countless other comedies than it is here. Their dedication to rebellion seems far less enthusiastic than it was before, as if they can’t even convince themselves of their purpose.

But Hahn once again is the film’s MVP, as she was in the original “Bad Moms,” for her willingness to go to weird, dark places. Like Melissa McCarthy and Kate McKinnon, Hahn achieves this delirious state through bold gestures and subtle glances, and she’s consistently a joy to watch. This is especially true in her scenes with Justin Hartley as a hunky Santa with a heart of gold; they meet cute when he steps into the spa where Carla works to get his nether regions waxed before a male stripper competition.

The combination of the innocent and the inappropriate in their sparky exchanges suggests how good this “Bad Moms Christmas” could have been all along. 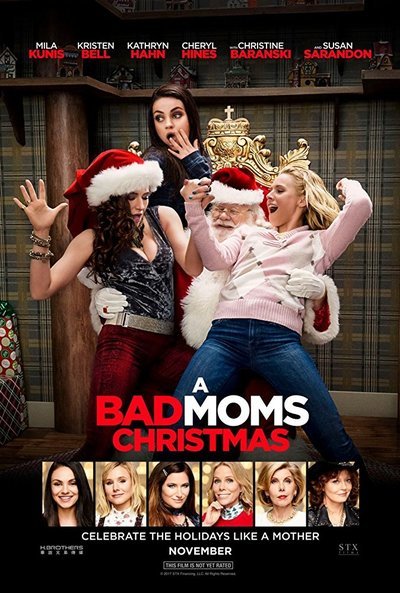