A Babysitter's Guide to Monster Hunting

Granted, it’s meant to be a fantasy film, but not a single moment rings true in “A Babysitter’s Guide to Monster Hunting”—not the teen angst, not the little-kid nightmares, and definitely not the sense of fun and camaraderie meant to fuel these Halloween adventures.

It also seems unrealistic to expect that director Rachel Talalay’s movie, based on the first book in the Young Adult series by Joe Ballarini, will launch a franchise as it apparently intends. Very little here grabs you and makes you want to watch more. Everything in this Netflix adaptation is extremely harmless in an effort to appeal to the largest possible audience of kids stuck at home, but rather than serve as an entertaining distraction from the trick-or-treat festivities they’re probably missing, “Babysitter’s Guide” may just lull them to an early bedtime.

Tamara Smart has a pleasing on-screen presence, though, as our guide through the movie’s dark, underground world. She plays a high school freshman named Kelly, although everyone derisively calls her Monster Girl because of a story she’s told about the scary creature who visited her in the night when she was a child. The mean girls and sweet nerds alike speak to each other in the cutesy, stilted way adults think teens talk in Ballarini’s adapted script. (“Pump the brakes, Casanova,” is the kind of cringey thing these people say to each other.) “Babysitter’s Guide” is also one of those movies in which a character who is as intelligent, kind, and beautiful as Kelly is supposedly an outcast.

But because she’s considered a brainy weirdo—which the movie renders visually with “A Beautiful Mind”-style math equations leaping off the classroom whiteboard and floating before her eyes—Kelly is expected to babysit on Halloween night rather than go to the wholesome rager where all the cool kids will be, including her crush (Alessio Scalzotto). Her charge is the angel-faced Jacob (Ian Ho), the son of her mom’s icy boss (Tamsen McDonough). But soon after she tucks him in for the night, a beastie appears and absconds with him.

In no time, Oona Laurence’s tough girl Liz Lerue shows up on her scooter with her perky bob and an arsenal of smart-ass one-liners to help. Liz, as she explains, is part of a secret society of babysitters who hunt monsters. Hence, the title. They have a headquarters and gadgets and chapters all over the world. (Supposedly, Merlin, Rosa Park, and Frida Kahlo are among their alumni.) But most importantly, they have a sense of duty to protect the kids in their care. In this case, they must fight a team of roly-poly, candy-colored goblins who look like UglyDoll knock-offs (they’re kind of adorable, actually) in order to get to their leader. He’s a jaunty gentleman known as The Grand Guignol, who aims to drain kids of their nightmares for fuel. Yes, we’re talking literal nightmare fuel. Tom Felton—Draco Malfoy himself—is more playful than fearsome in the role, and his stringy hair and tattered clothes call to mind a grungier Eddie Vedder.

There’s a cheesy, detached quality to the visual effects, part of the overall low-budget look of the film. The chintziness calls to mind the “Spy Kids” movies, which Robert Rodriguez famously made for a song while wearing multiple hats throughout production. A few visual flourishes do work, including The Grand Guignol’s sleek, art deco-inspired lair. But “Babysitter’s Guide” also tries to cram in a whole lot of world-building, and the denseness of Ballarini’s mythology makes the movie needlessly inscrutable. Meanwhile, the wall-to-wall, perky pop songs accompanying all these adventures amp up the annoying factor—or as my 11-year-old son put it, “Why is the music so stupid?”

It’s hard to figure out exactly what Talalay and Co. are aiming for here. “Babysitter’s Guide” is never truly scary but it’s also never all that funny. The characters are flat and the antics are tame. It occupies a bland, mushy middle—like the smushed-up, fun-size 3 Musketeers bar that’s sitting at the bottom of your Halloween candy bowl. 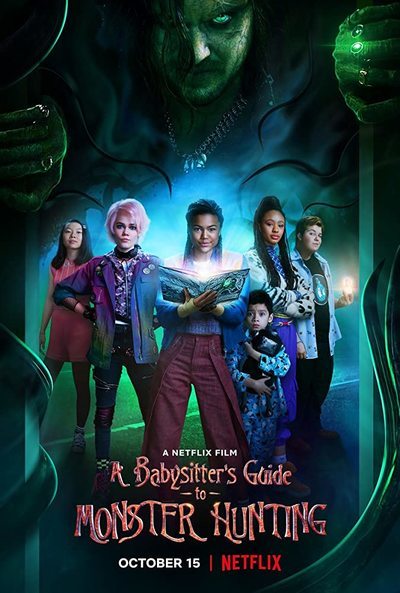 A Babysitter's Guide to Monster Hunting (2020)

Tom Felton as The Grand Guignol