In June 1976, a group of self-proclaimed revolutionaries hijacked an Air France flight from Tel Aviv to Paris, boarding the plane during a stop in Athens. They forced the crew to fly the nearly 250 passengers to Libya for refueling before heading to their ultimate destination of Entebbe, Uganda, where they held the frightened travelers for a week in an abandoned airport terminal before an elite team of Israeli commandos rescued them in a nighttime raid.

It was a daring operation, one that captured the world’s attention and inspired several movies, including 1977’s “Operation Thunderbolt.” But you’d never know how thrilling this mission truly was from its latest big-screen incarnation, the weirdly sluggish and dull “7 Days in Entebbe.”

Brazilian director Jose Padilha has made his name with action pictures, including the “Elite Squad” series, and the film’s later bursts of intensity are indeed its highlights. But working from a script by Gregory Burke, Padilha employs a back-and-forth narrative structure that frustratingly keeps the movie from attaining its potential momentum.

“7 Days in Entebbe” actually opens on a spare stage with a semi-circle of chairs as members of the Batsheva Dance Company work through their performance of Ohad Naharin’s “Echad Mi Yodea,” with its bold percussion and rousing melody providing a driving rhythm. Padilha comes back to it over and over again—including some insistent parallel editing during the climactic rescue—and it just never works. Whatever he might be trying to say about people rising up and asserting themselves in the face of oppression is never clear.

Unlike previous tellings of this story, “7 Days in Entebbe” focuses on the hijackers: specifically Germans Wilfried Bose (a quietly intense Daniel Bruhl) and Brigitte Kuhlmann (a jittery, de-glammed Rosamund Pike), who have teamed up with members of a pro-Palestinian group to plot and pull off this mid-air attack on Israel. They’re ideologues trying to play it cool, but increasingly they find they’re in over their heads.

But they’re also cognizant of the negative optics of Germans singling out and separating the Jewish passengers from among the group, having confiscated everyone’s passports. There’s cursory talk of the residual guilt that lingers for so many Germans, just a few decades after the Holocaust, but it’s one of many heady notions that are briefly mentioned and then cast aside.

Instead, ordinarily resourceful actors like Pike can only do so much when they’re saddled with explaining who they are and what they believe in facile ways. “I am a revolutionary,” she says. And later: “I only fear a life without meaning.”

But wait. Padilha has many more characters to introduce and more perspectives to complicate the mix.

Back in Jerusalem, Prime Minister Yitzhak Rabin (the always solid and reliable Lior Ashkenazi) wants to do something Israel insists it will never do: negotiate with terrorists. Meanwhile, his defense minister, Shimon Peres (an eerily unblinking Eddie Marsan, with some unfortunate fake eyebrows), wants to make a stronger statement and take swift action. Hence the development of Operation Thunderbolt, as the rescue plan came to be known.

And looming vaguely in the background is the threat of what wild-card Ugandan President Idi Amin (Nonso Anozie) might do, even though he’s given his blessing for the terrorists to hold their hostages in his country. (Amin is depicted as imposing but gregarious, rather than volatile and frightening.) But the vast majority of the passengers are a nameless, voiceless mass of humanity, with the exception of an elderly German Holocaust survivor who briefly bonds with Bruhl’s character and the flight’s engineer (a very good Denis Menochet) who serves as the much-needed, level-headed voice of reason.

Regardless of the character or setting, everything is bathed in a period-evocative, warm, smoky light. Much attention was paid to the oversized sunglass, wood paneling and ever-present cigarettes of the era. “7 Years in Entebbe” works hard to make you feel as if you’re watching a movie that was actually made in the ‘70s, including scattered news reports and archival footage from the era. But it doesn’t quite hit its target in providing an emotional resonance or political relevance for today. 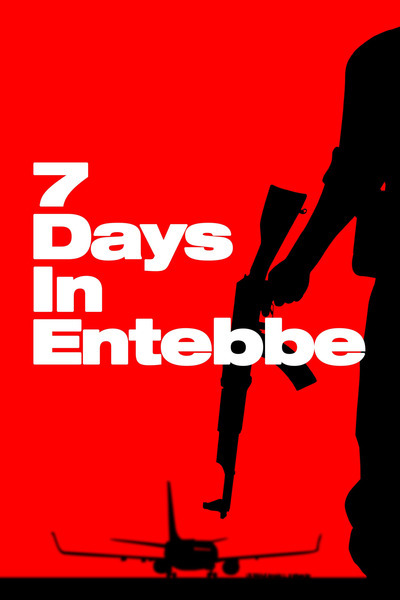