Given his penchant for intense, fast-moving, “you are there” modes of cinematic storytelling, there was every reason to dread the prospect of Paul Greengrass making a film about the horrific events in Norway on July 22, 2011.

That was the day that Anders Behring Breivik committed a bombing outside a government building in Oslo, and in the confusion that followed, went to the island of Utøya, heavily armed, and shot at hundreds of young people at a camp there. His acts killed 77 people and wounded more than 200. If you’ve seen “United 93,” whether you admire it or not, the prospect of the same filmmaker taking you through a meticulous simulation of that day is at the very least daunting.

But Greengrass is more than just an effective crafter of harrowing cinematic experiences. As his better films testify, he is a thoughtful writer and director who at his best is equally concerned about the psychological toll of war and violence, and the philosophical and moral questions of how to approach violent actors and their acts as he is about making those acts convincing on a screen. And “22 July” is at its most engrossing and moving in its depiction of one brave kid, a victim of Breivik who was shot five times and lived, and that kid’s eventual resolve to face the terrorist in court.

That’s not to say that Greengrass’ movie is an easy sit, by any yardstick. Filmed in Norway with a cast of actors from that country—although the movie is entirely in English—"22 July" is predictably meticulous in depicting what Breivik did. The movie intercuts between three omniscient points of view that branch off as the action continues. For its opening, prior to the terrorist acts, it puts us with Breivik as he prepares his explosive and gets his weaponry and disguise—he dressed as a police officer—ready. Then on the island of Utøya, where families drop off their children at a camp for future leaders, as it were. Special attention is paid to the Hanssen family; brothers Viljar and Torje are being dropped off by their parents. Their mom is running for mayor of their town, far from Oslo. Back in Oslo, the country’s Prime Minister is preparing to address the campers. But Breivik’s bomb, which blows away the façade of one of the government buildings in Oslo, followed by his fleeing to the island to commit his massacre, changes everyone’s agenda.

The spectacle of the fleeing children as they’re stalked by the implacable Breivik is awful. “You will die today,” he shouts at them. “Marxists, liberals, members of the elite.” It’s clear throughout that Greengrass does not see this awful event as an isolated incident, even though, once Breivik was captured and put on trial, his grandiose claims of being a soldier in a larger war called by other right-wing extremists did not pan out. But one needs to be very obtuse not to connect Breivik’s statements to chants like “You will not replace us.”

Nevertheless, as the movie continues, “22 July” frames Breivik’s acts as those of a criminal, not as the war battles the criminal himself insists they are. Once in custody, Breivik names a lawyer he wants, and the man, Geir Lippestad, is by Norwegian law obliged to take his case, although as the film goes on it’s clear that Lippestad, while conscientious and thorough, is not enthusiastic, and not just because midway through prepping the defense he’s told he should withdraw his child from school. This thread of the film grapples with the idea of justice. The thread following the Prime Minister explores the ways that should-be red flags like Breivik fall through the cracks of a police system with catastrophic results. And the thread following the Hanssen family, particularly Viljar, show how lives torn apart come back together again, but very much changed.

Jonas Strand Gravli plays Viljar, and his performance seems entirely unaffected despite the fact that his character undergoes such an enormous physical change. Going off to camp, he’s a strapping, healthy teen, full of energy. The shooting costs him an eye, the use of one arm, and leaves bullet fragments dangerously close to his brain stem. It also, at least temporarily, costs him his spirit. He looks literally drained.

Breivik, on the other hand, seems to luxuriate in his arrogance as he tries to game the system to get not just his day in court but his forum in court; he wants to use his trial as a vehicle for his grotesque white nationalist views. Anders Danielsen plays the monster in a way that acknowledges his humanity but also plainly states that Breivik himself has made his humanity beside the point.

Viljar, in deciding whether he wants to make a statement at the trial, contends not only with his broken physical state, but the values that Breivik tried to kill as well.

It’s in these sections that the film finds its most fulfilling footing. Greengrass doesn’t go for any big triumphalist moments; he doesn’t make Viljar’s courtroom speech a masterpiece of eloquence. This is a movie about difficulty and necessity. Greengrass’ ever-inquisitive way of shooting and editing is a given, and there were one or two moments, particularly in the more quietly-pitched scenes depicting Viljar alone and struggling, during which I wished the director would have held a shot for a few seconds longer. But this is his style, and he owns it, and he’s used it to make a vital picture. 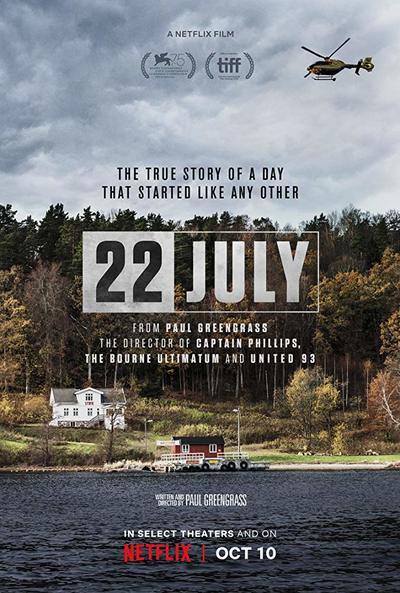 Writer (based upon the book "One of Us" by)