14 Peaks: Nothing is Impossible

Without checking online, can you name the first person to climb Mount Everest? If Sir Edmund Hillary comes to your mind, Nirmal “Nims” Purja wants you to know that Sir Edmund was able to reach the summit of the highest mountain in the world because of the man who reached it with him, the Nepali Sherpa mountaineer Tenzing Norgay. In the documentary “14 Peaks: Nothing is Impossible,” Purja undertakes a quest even Sir Edmund and Norgay might find daunting. He wants to take an all-Nepali group to the top of the 14 tallest mountains in the world, each more than 8000 meters (26,247 feet) above sea level.

There is a reason that we use mountain metaphors to speak of tasks that are beyond the realm of the achievable, describing them as “insurmountable.” Only a handful of people have climbed all 14 of the 8,000-meter mountains. The first was Reinhold Messner, and it took him 16 years to do them all. Purja decided he would do it in seven months. Usually, one of this documentary’s experts tells us, any of these mountains is a two-month project. Aside from the almost unthinkable challenge each mountain poses, the physical, emotional, and financial problems of doing them in such a short time and the unpredictability of the weather, there are the geopolitical/diplomatic challenges, with mountains in Nepal, Pakistan, and Tibet/China. And Purja almost always climbs without additional oxygen, to altitudes with just a third of the oxygen we are used to breathing. One of the mountains normally takes four days to summit. He does it in one. With a hangover.

“I was told that my project was impossible,” Purja tells us. “So, I decided to name it Project: Possible.” He is determined to do it to give Nepali climbers the credit they are due, and, he notes, to pay them more than they would get from Western climbers. It will burnish the resumes of his team and provide more opportunities. He makes a point of introducing us to each member of the team at the beginning of the film, calling them his brothers and telling us about each one’s special skill. Over the course of the film, we see his determination but also his heroic generosity of spirit, helping others who had given up to achieve the summits and stopping, at the risk of missing his deadline, to help climbers suffering from exposure or altitude sickness.

They discover one on their descent from their first peak and go back to help him. “You surmounted one of the most dangerous summits in the world and now you’re going to go back up there?” another climber asks, admitting that he was hoping the stranded climber had died so they would not have to find a way to get him to a hospital. “I have never left anyone behind,” Purja says about his time in the military. “I was not going to do that on the mountain.” Purja and his team have to stay awake all night with the critically ill climber. At 6 AM they get him to base camp where he is picked up by a helicopter. Later, another fallen climber they come across will not be so lucky.

Purja, a member of the Nepali Gurkha special forces, is the youngest son of a loving family and was always intensely competitive. He goes on a 20 km run with a 75-pound pack every morning and goes to the gym after work until 11. In one scene we see a very impressed high altitude specialist comment on his physical condition.

Those of us who will never make it to the top of one of these peaks will get an unprecedented opportunity to see what the top of the world looks like with pristine images of stunning clarity and grandeur captured by Purja himself. Viewers will find them nearly as breathtaking if they had climbed to the top gasping in the high altitude.

With 14 mountains plus backstory in just over 90 minutes we do not get to spend a lot of time learning the specifics of each mountain, but we do get to see some of the individual differences, here six feet of snow, there treacherous rocks or vertiginous tors. Mount Everest is packed with climbers while the others are almost empty. A photo Purja takes of the long, long line to the top of Everest goes viral worldwide. But I wished for more information about the complicated negotiations with China, the particular challenges of each mountain, and how the team adapted to changing circumstances.

Director Torquil Jones touches on a lot of material, skillfully using animation for some near-death experiences and less skillfully using special effects and editing to suggest the distortion of reality caused by HACE: high altitude cerebral edema. There are well-selected comments from experts and a climber Project Possible helped to reach a summit. And we see Purja’s family, including the brother who urges him not to take financial and physical risks and the mother he adores who is very frail but blesses his journey. Messner is candid about the hardship involved. “People will say it is fun. It is not fun. It’s a place where you have to learn to cope with pain.” But Purja and his team have enormous appeal, clear about the dangers but always showing warmth and good cheer.

Purja says he never wants to hear a climber say “my Sherpa helped me.” The Sherpas have names. Without their names, he says, “they are ghosts.” He knows that if a Westerner accomplished these climbs, it would be world news. This movie shows us the teamwork, the dedication, the national pride, the astonishing vistas, and the reason that Purja and his team deserve to be as renowned as Sir Edmund Hillary, maybe more. 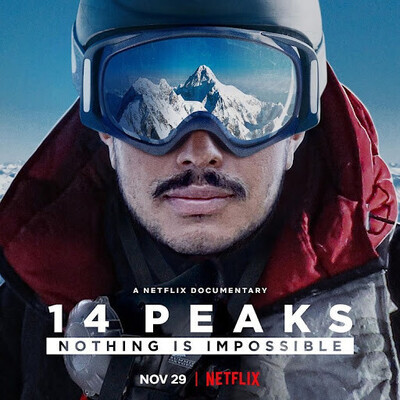 Nirmal Purja as Self