A cigarette break kicks off “12 Hour Shift,” a soft-boiled neo-noir comedy about a routine black-market organ harvesting deal that somehow doesn’t go to plan. Mandy (Angela Bettis), a nurse working in an Arkansas hospital circa 1999, is surrounded by people who want things from her, and on terms that she doesn’t really care for. At least, that’s what an introductory scene suggests. Fellow nurse Cathy (Julianne Dowler) peppers Mandy with unsolicited opinions, like when Cathy suggests that Mandy “seems to have it all together, money-wise.” Cathy’s glib, and relatively upbeat mood contrasts with Mandy’s immediate exhaustion: Mandy hasn’t even started her double shift, but she’s already ready to check out.

Seconds later, Mandy’s working around her job’s responsibilities, as well as some complications that arise from a ghoulish moneymaking scheme that she’s worked out with easily bemused shift supervisor Karen (Nikea Gamby-Turner) and ditzy cousin Regina (Chloe Farnworth). Karen covers for Mandy while she uses bleach to kill off terminal patients, then Mandy takes those patients’ internal organs and hands them over to some generically ornery bikers (including one played by ex-wrestler Mick Foley), who in this case are using Regina as their go-between. Some modest complications ensue after Regina loses Mandy’s latest shipment, including but not limited to the arrival of awkward and officious Officer Myers (Kit Williamson) and comatose crook Jefferson (David Arquette), who is being treated at Mandy’s hospital.

Most of the peril that Mandy soon finds herself in is situational; that is, there’s not much on the screen that pushes her story along beyond some essential narrative contrivances. Mandy’s consequently never more nuanced than Bettis’ constant grimacing, teeth-grinding, and eye-rolling. She’s pretty middle of the road, as far as put-upon schemers go, and is never presented in too harsh a light. I mean, who would want to change pee-soaked bed sheets, indulge chronically pesky hypochondriac Mr. Kent (Tom DeTrinis), or be confronted by a moribund dialysis patient (Ted Ferguson) who suggests that “the sad thing about dyin' is ... the minutes really slow down. You forgot to appreciate all those other minutes, now all you got is shitty ones.”

Moreover, who would want to clean up after Regina, a hopelessly goony antiheroine who creates mildly complicating dilemmas that are either immediately resolved, or just one more thing to keep Mandy poking along behind the scenes? I mean, even Mikey (Dusty Warren), the heavy who’s tasked with bringing Regina back “by the hair,” provided that she doesn’t come back within an hour … even he takes 66 minutes to spring into action. If you don’t like the premise of “12 Hour Shift,” you’re not left with much to hold onto.

In this context, Farnworth’s appropriately broad performance is exceptional. She doesn’t have much dialogue that’s worthy of her playful, all-in line readings, but Farnworth deserves all due praise (and more) for the scene where Regina idly asks Mandy how many kidneys she needs to live. “One,” Bettis hisses. “How many was I born with?” Farnworth asks. “Two,” Bettis sighs, grinding hard on her character’s one emotional note. “That’s not too bad,” Regina thinks aloud.

There’s nothing so engaging about Karen and Mandy’s interactions, presumably because both women are perpetually kept away from … well, whatever it is that they’re supposed to be doing at the hospital. In an early scene, Karen and Mandy divvy up their payola: “There’s nothin’ I like better than cash in my hand,” says Karen. A slight pause, then Mandy replies: “There's a few things I like better than cash in my hand.” “Me too, actually,” Gamby-Turner says. “Or not.” I have no idea what the joke here is, but that seems to be the point of the scene: you’re either in with Mandy’s crew, or you’re not. I was mostly fine with “not,” even if Farnworth’s cartoon energy sometimes made me wish otherwise.

The hospital in “12 Hour Shift” is, more often than not, just another place where social misfits do dark, mildly perverse things. Everybody’s an obstacle in Mandy’s way, but nothing about her behavior suggests that she’s more than a vaguely defined cipher for anybody who’s ever been stuck at a soul-crushing job that has, over time, lost all meaning, and is now just a means to some ill-gotten ends. Work sucks, duh, but if your job is saving other people’s lives, and you’re stealing a few just so you can line your pockets, I should hope that I leave your company knowing what your deal is, and why you’re clinging so tight to that cash in your hand.

Now available in theaters and on demand 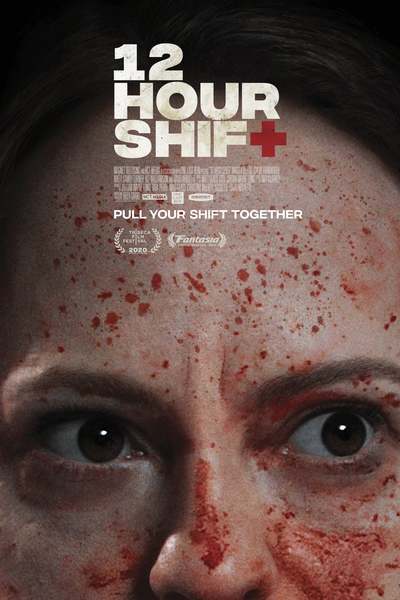