A Chicago production that’s on Amazon Prime this week after a brief festival run and limited release back in February, “100 Days to Live” gets over some sketchy writing through sheer momentum and the power of a charismatic performance from its leading lady. Potential viewers should be warned that suicide is a main theme of this thriller that was shot by entrepreneur Ravin Gandhi in and around the beautiful city of Chicago (and even largely in Gandhi’s own apartment). It’s a traditional thriller with a twist, subverting genre roles and presenting a very specific kind of sociopath, one whose brain was broken by trauma. It’s not perfect but it offers a quick-paced escapism that makes me wonder what Gandhi might do with more time and money.

A woman is doing yoga by the lake when she’s suddenly abducted, taken to an abandoned building, and shot twice. A book is found on the mat where she was working out with a cover that says, “Tanya Was Saved,” featuring photographs of the victim. Not long after, a man named Gabriel (Colin Egglesfield), shortly after getting engaged to Rebecca (Heidi Johanningmeier), goes out for a smoke and ends up disappearing, a similar book found at the spot on which he was last seen. Rebecca is brought in by the police and told the serial killer tormenting the Windy City is known as the Savior, and one of the officers (Yancey Arias) believes that he’s found a connection—all of his victims are survivors of suicide attempts. As she’s looking through the photos of her lost love, Rebecca spots someone who must be the killer ... and she recognizes him.

You see, Rebecca works at a suicide prevention group, and she used to answer phones at a clinic with a tormented young man named Victor Quinn (Gideon Emery). She thought he was dead. He very much is not. Victor’s motives are something I haven’t really seen in a thriller before, but, again, a trigger warning is very much in order here as “100 Days to Live” is very bluntly about suicide—considering it, surviving it, being unable to save some people from it, and even getting through the ideation of it. In my opinion, Gandhi very carefully threads a needle regarding subject matter that could have been perceived as exploitative given the real traumas faced around the world related to suicide, but some may not want to venture into this emotional mine field.

While some of “100 Days to Live” doesn’t add up (OK, maybe a lot), Gandhi keeps it moving with enough twists and turns that viewers are unlikely to ask too many questions. It’s one of those films that maintains suspension of disbelief through sheer pace, and yet it also has a reasonable degree of character development, especially in the primary four roles. It helps a great deal that he has a cast who’s up for the challenge, especially Johanningmeier, who is natural and charismatic in a way that really works. (She could totally anchor an NBC drama.) Veteran character actor Arias adds gravity as the officer who helps Rebecca try and stay a step ahead of Victor. And Gandhi really loves Chicago, shooting it in a loving way that I feel like I haven’t seen in a while. In the end, the cheesy dialogue and questionable third act decisions are easier to overlook because of the passion and dedication to filmmaking both behind and in front of the camera.

On Amazon Prime tomorrow, May 4th. 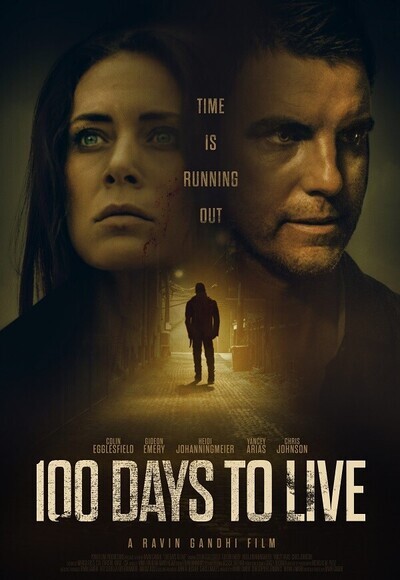