My Favorite Roger: Kevin B. Lee

"All Stars: Or, Is There a Cure for Criticism of Film Criticism? Pt. 2"

Why did I choose this essay?

This is possibly the greatest piece Roger ever wrote, though I didn't encounter it until after his passing; I stumbled upon it in an extended bout of Ebertiana that only the web makes possible, with one link leading to another and eventually to this masterful essay. In 1990 Siskel and Ebert were attacked by Time Magazine's Richard Corliss in the pages of Film Comment, for what Corliss felt was the dumbing (or rather, thumbing) down of film criticism by Gene and Roger's turning it into televised sport. Ebert's response is incredible. He doesn't so much defend himself as take a 30-year, 360 degree view of both film criticism and film culture, warts and all. His knowledge of every nook and cranny of film journalism, from the New Yorker to Fangoria and all parts in between, is breathtaking. And he doesn't spare himself or his show for their shortcomings. In the last section he lays into the entire movie-media-marketing-industrial complex with a vengeance, and preaches the gospel truth, calling out the system for what it is. The thing is, it's only gotten worse since. 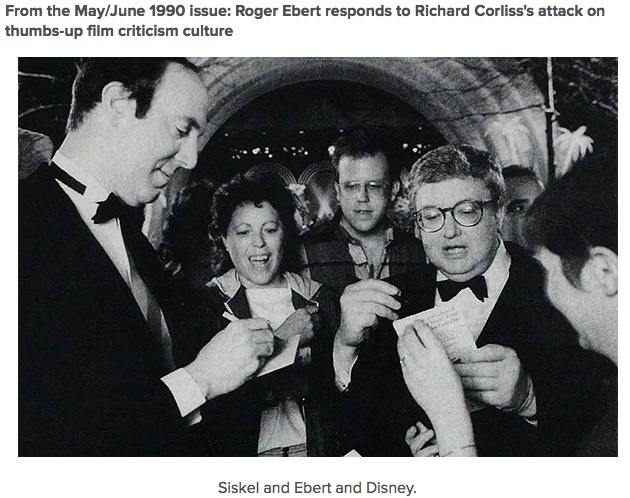