Editor's note: Los Angeles-based screenwriter and filmmaker Eric Haywood attended the Los Angeles protest over the situation in Ferguson yesterday. The following is an email he sent to me about what he heard and saw there.—Matt Zoller Seitz

I did not know Michael Brown. Or Ezell Ford. Or Omar Abrego. But when I heard that there would be a rally outside LAPD headquarters in downtown Los Angeles today, protesting each of their deaths at the hands of law enforcement officers, I felt compelled to attend. 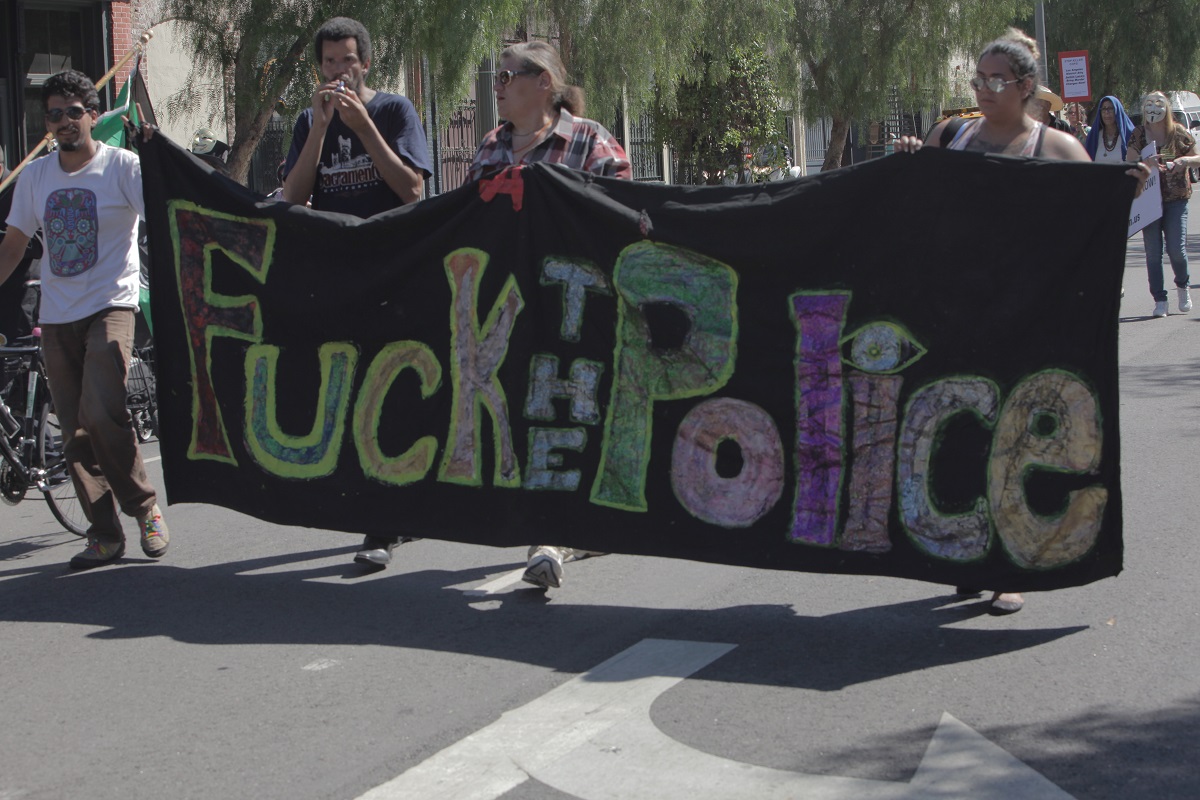 Arriving at about 3:00 p.m., I discovered a small crowd of roughly 75-100 people gathered in front of the building, many holding signs (ranging from “Stop Killer Cops” to “Justice for Ezell Ford” to “Fuck the Police”) and giving interviews to camera crews. Police presence, to my eye at least, was fairly minimal. About a half-hour later, someone made a short speech and the crowd (to my surprise) began moving away from the building, pouring into the streets and marching down Main Street.

This is where I decided to pull out my phone and begin live-tweeting. Over the past week, the vast majority of information I’d gotten regarding the events in Ferguson, MO as they unfolded came from social media. So for the people who couldn’t be there, I started documenting the rally as it moved through the streets.

Emotions were definitely running high among the crowd. While many protesters were single-minded in their focus on demanding justice for Brown, Ford, and Abrego, others seemed to be reveling in any opportunity to chant “fuck the police” in the presence of actual armed police officers. Some of the more aggressive anti-police protesters loudly vented their anger directly in the faces of the cops who’d been assigned to keep an eye on the proceedings. But by and large, the gathering remained overwhelmingly positive despite the emotionally-charged nature of the Ferguson killing (of Brown) that’s captured the world’s attention and the recent Los Angeles-based killings (of Ford and Abrezo) that haven’t quite garnered nearly as much notice outside of Southern California. 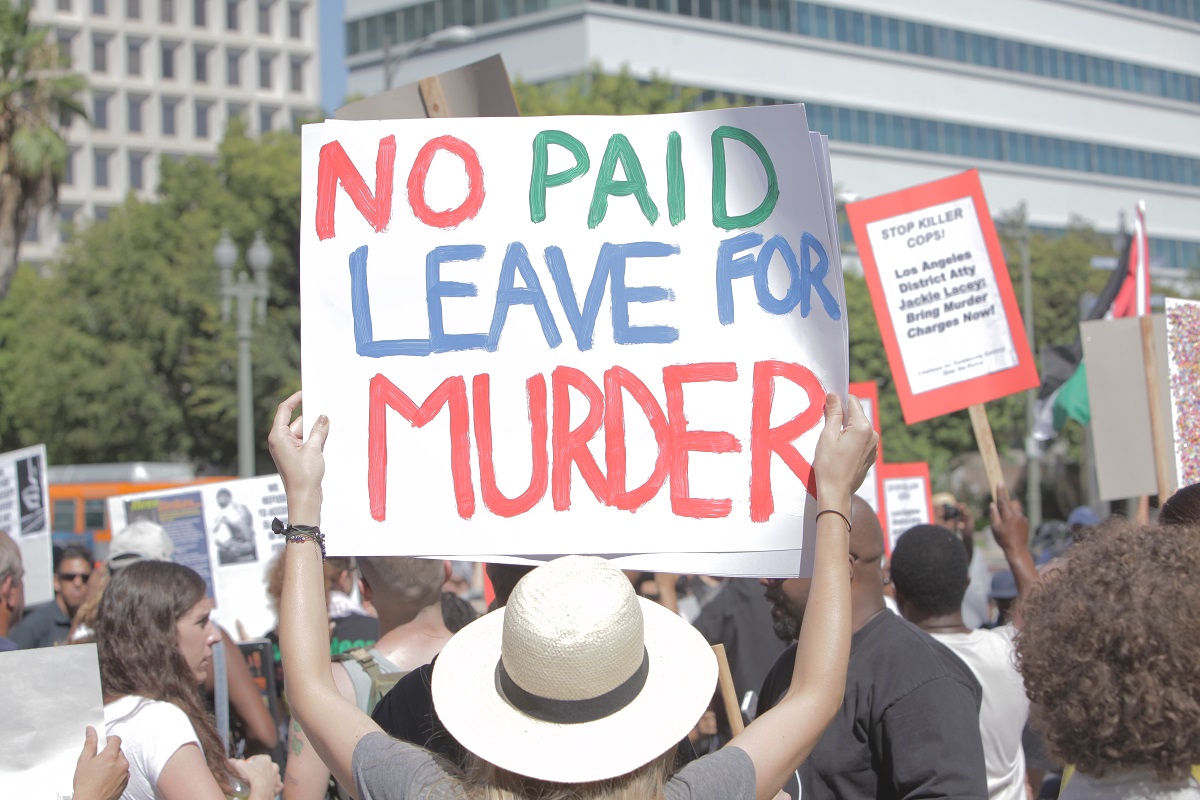 Several different chants rose from the crowd as we marched. “Hands up! Don’t shoot!” became a common refrain, and “Justice for Ezell Ford!” could be heard over and over. A handful of officers walked alongside the marchers, with a few on motorcycles or bikes, but none of the heavy-duty vehicles that we’ve seen deployed in Ferguson were in evidence during the Los Angeles rally. Probably the most notable piece of equipment the LAPD brought out was a police helicopter that constantly circled overhead, and shortly after the crowd began its march, several people pointed up in the air at a small four-propeller drone hovering above us. I had no idea if the drone was a piece of police equipment or just a remote-controlled toy that someone brought with them from home, but it was a bit strange seeing it keeping pace with the march as we moved forward. And while the tension never reached the levels I’ve seen coming out of Ferguson (nor did the police engagement), there were moments when it began to feel like things were definitely approaching a boiling point.

The LAPD was clearly prepared for the rally, as they’d blocked off traffic at several intersections, allowing the crowd (which had swelled to twice its original size within an hour) to move with relative ease along its path towards Union Station. Many drivers, stuck in their cars, honked their horns or waved at the crowd as we passed by, apparently in support of the march, but some clearly didn’t enjoy the unexpected disruption.

At one point, the marchers passed through an intersection that was blocked off by a group of LAPD officers on bikes. And suddenly, I got a first-hand look and what happens when a large group of people gets swept up in a tidal wave of emotion. 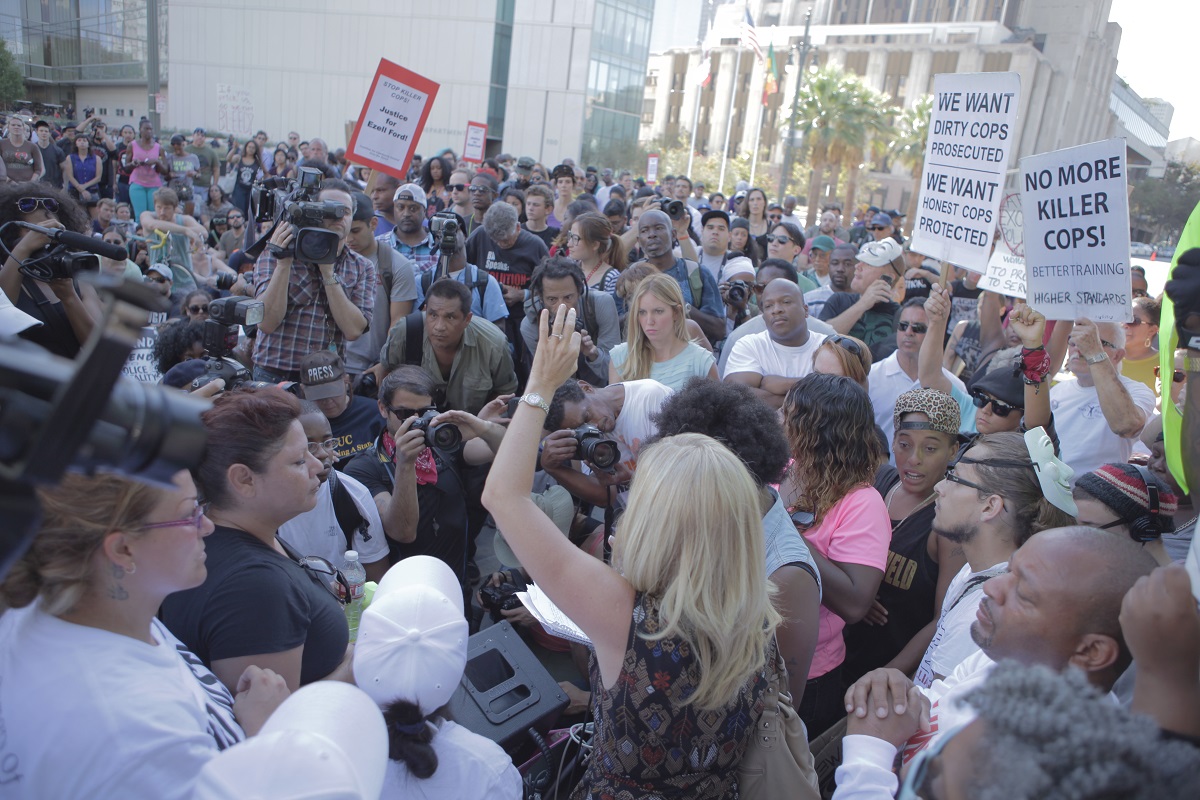 I’m not sure exactly how it started, but a few of the marchers decided to stop in front of the bike cops and further vent their frustration…directly in the cops’ faces. One man put his hands up and stood still, staring the cops down without saying a word while others shouted “Hands up! Don’t shoot!” beside him. Others began berating the cops (one Latino marcher called a Latino cop an “Uncle Tom”) and repeating their demands that the officers who killed Ford and Abrego be brought to justice. Three or four guys, carrying a “Fuck the Police!” banner, stopped and positioned themselves with it right in front of the cops so they couldn’t help but look straight at it.

It got ugly. A couple of the cops put their hands on their guns (none were drawn, but the crowd really didn’t like the sight of the cops touching their weapons, and voiced their objections in no uncertain terms). It was the only moment during the rally when I thought things might get out of hand. But the police officers stood there, not moving a muscle, and faced the angry crowd silently. One cop made what looked like a grand gesture of taking a long, slow drink from her bottled water, as if to show the protesters who were only a few feet in front of her that they’d never be able to faze her, no matter how deep their anger and hurt. This was just another day at the office. But there was a clear sense that if only one protester had gotten too close or shouted the wrong thing, the whole scene would’ve erupted into something pretty dangerous for all involved.

Thankfully, the crowd began to police itself, with several protesters (including a lady pastor who positioned herself between the two opposing sides) calling for those who’d stopped in front of the cops to move on and rejoin the rest of the rally. They seemed to realize that the situation had the potential to turn explosive if things hadn’t been defused.

And so the stopped protestors finally broke away from the police officers and continued moving through Koreatown with the majority of the group. The bike cops began to disperse as well, and despite the sudden de-escalation of an incredibly tense moment, one bike cop rode past me and glanced at his watch. He looked kind of bored as he did so, and I couldn’t help but imagine him already forgetting about the crowd’s anger and wondering how much more time he had left before the end of his shift.

The march circled back to LAPD headquarters, and by this time, I noticed that the crowd was probably well over 300 participants. Earlier, when things began, there was an effort to keep the protest on the sidewalk, but now the crowd was far too large to be contained. Everyone filled the street directly in front of the LAPD building, once again chanting “Hands up! Don’t shoot!” over and over. Lisa Bloom addressed the crowd with a microphone, insisting that she’s tired of seeing black and brown citizens treated the way they have been for far too long, and then the microphone was handed over to members of Omar Abrego’s family, who spoke passionately about how much they missed their loved one.

All in all, it was a peaceful–but emotional–event. As I left downtown, and began my journey home, a part of me wondered how long it would be before the next rally.