The key word is “definitive.” Hope put his name on several ghostwritten memoirs. William Robert Faith, a publicist, contributed the authorized, “A Life in Comedy.” Arthur Marx (Groucho’s son) dished the unauthorized “The Secret Life of Bob Hope,” which focused on Hope’s prodigious womanizing and the “dark undersides to his character.” Publisher’s Weekly dismissed it as “a hatchet job” that “breaks new ground in sleaziness.”

But now comes “Hope: Entertainer of the Century” by Richard Zoglin, author of the essential “Comedy at the Edge: How Stand-Up in the 1970s Changed America.” And for those who remember only the downside of Hope’s career—unfortunate films such as “Boy, Did I Get a Wrong Number” and “Cancel My Reservation,”; the lame NBC specials, groan-worthy jokes about hippies, his close association with President Nixon and hawkish stance during the Vietnam War—this book will be either a revelation or a reminder of what a titanic figure in popular culture Hope was. And how funny.

Hope, who died at age 100 in 2003, is not exactly forgotten. He’s just not part of the conversation, and considering the sheer longevity and epic scope of his career (the index in Zoglin’s book includes Al Jolson AND the Village People), attention must be paid.

If John Wayne was America’s cowboy, Hope was America’s comedian. He was the original king of all media; a star of vaudeville, Broadway, film (he was the top box office draw in 1949), radio and television. He even had his own comic book. He hosted the Academy Awards an unprecedented 18 times. He tirelessly entertained America’s troops overseas from World War II to the Persian Gulf conflict, which may serve as his most lasting legacy.

Hope created a signature comic character, the delusional ladies man; the brash, but cowardly wiseguy, as in “The Road to Utopia,” in which he must impersonate a vicious killer. He steps up to a bar and with false bravado barks, “Lemonade” before quickly correcting himself, “In a dirty glass.”

The “Road” films, in which he was the “taken” to Bing Crosby’s “taker,” are his most beloved and enduring, but there was much more to his career. Watch “Monsieur Beaucaire,” to which Woody Allen paid homage in “Love and Death.” Listen to his vintage radio shows and marvel at his exquisite timing. And read Zoglin’s meticulously researched book, which answers the questions, “Who was Bob Hope, and why does he matter? 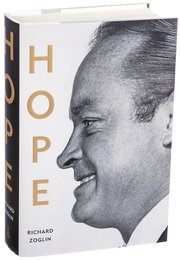 Growing up, the “Road” movies were my gateway into Bob Hope. What about you?

It was the “Road” pictures. There was something so much fun about those two guys and the way they related to each other, the way talked to the audience and the craziness of the gags, like in ‘Utopia’ when an actor walks through a scene and says he’s going to another move set. It was so liberating and fun. I even liked the slapstick. I remember laughing so hard at the wrestling match with the gorilla in ‘The Road to Zanzibar.’ (Even as a child, I thought) it was so hokey, but that was really appealing.

You write that by the time he died, Bob Hope’s reputation was already fading and tarnished. Why now to do this book?

I had thought about writing a Bob Hope book about 10 years ago or even longer, because I think he was still alive at the time. I did ‘Comedy at the Edge’ instead, When I was interviewing all those guys—George Carlin, Steve Martin, Richard Lewis, Robert Klein, Jerry Seinfeld—I would always ask who their influences were. If it wasn’t Lenny Bruce, it would be some of the older performers, but nobody ever mentioned Bob Hope. I realized how off the radar he was. But in thinking about standup comedy, you would have to say Bob Hope was about as close to a founder as anybody. One big motivation to do the book was to show these guys that they should appreciate the guy who basically invented their art form.

But I felt there was something wrong that such a major figure in American entertainment did not have a definitive biography. I thought it was really needed.

Before you began writing the book, what was your impression of Bob Hope?

I went through the Vietnam years when I wasn’t so thrilled with him. Nixon brought him into the White House to explain why he was bombing and expected Bob would carry the message to the American people. That’s a role no other entertainer has ever had. And I certainly discovered all the blemishes in his personality. It was said he could be a cold guy and egotistical. He was a distant father, He was cheap. He was a philanderer. Things like that. I went into the book thinking I was going to expose the guy a little bit, but I also wanted to celebrate his career.

The second part of your question will be how I felt about him after writing it? 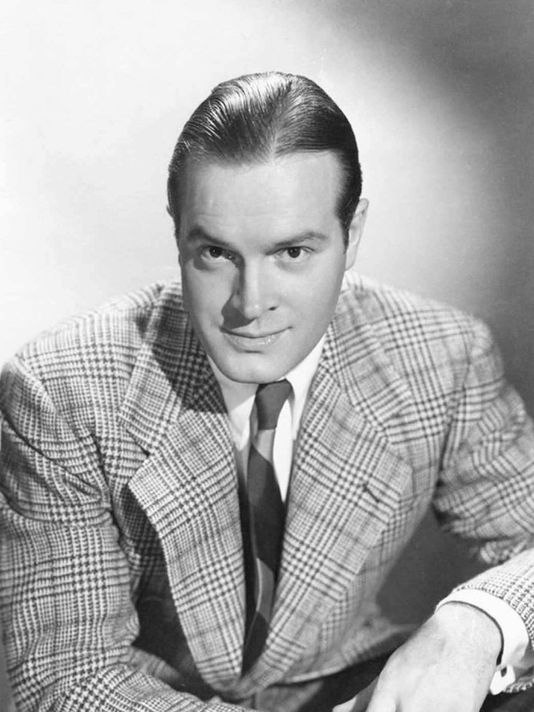 In the end I liked him a lot. I really responded to how driven he was, how successful he was at everything he tried, how smart he was about managing his career and figuring out where the audience was and where the audience was going. But also, I do think he managed to keep his feet on the ground in a way that many celebrities don’t. He didn’t have too ostentatious a lifestyle He was generous to friends and relatives and to people who needed it. He authentically was a guy who enjoyed what he did. He loved being famous. He was not burdened by fame. He didn’t complain about lack of privacy. He loved being out there and dealing with fans. He was a happy guy who found his niche and did it so well. You have to admire a guy like that.

Bill Cosby’s biographer, Mark Whitaker, has come under increasing fire for not addressing at all the sexual assault charges against the comedian, especially following this stream of new revelations (Whitaker has since tweeted his mea culpa). Was there a request or pressure from Hope’s family for you to not address the less admirable aspects of his private life?

The family cooperated with me. They knew I was going to get into everything. They tried to soft pedal it and certainly would have preferred for me not to get into it, but his daughter, Linda Hope, realized I’m a journalist and I had to do my job. I had to acknowledge it. (The womanizing) was too much known to everybody, and the people who knew him well would not take the book seriously. But I was careful.  I only put in the material I got from sources who went on the record. But it was very important to keep (his character flaws) in perspective. The Arthur Marx book basically told all, but it was as if that was Hope’s whole personality.

What made Bob Hope an innovative comedian?

It was the kind of material he did. Bob Hope came on the radio with no character to do, really, and no comedy entourage, like Jack Benny who had his self-contained comedy world and a character—the cheap guy. Hope told his writers to get jokes out of the news or about his own life. (He was the logical heir to Will Rogers).doing monologues about the real world. 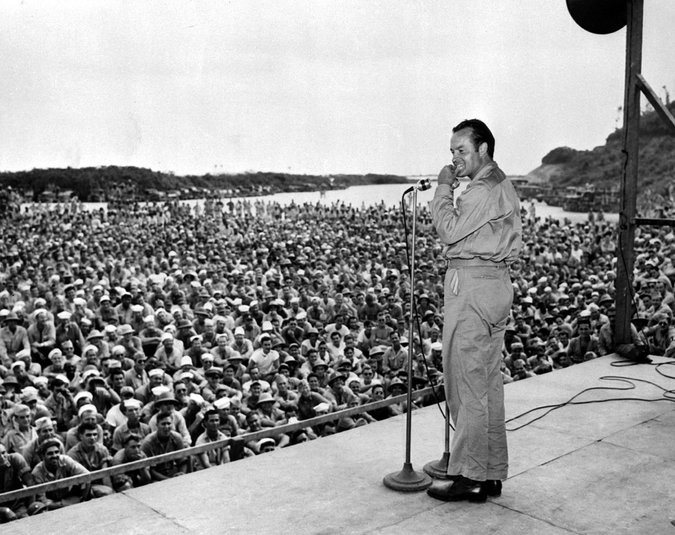 Lenny Bruce once said that he only considered those who created their own material as “funny.” Those who relied on writers he termed “good actors.” By that strict definition, was Bob Hope funny?

I see the difference. Lenny Bruce and his followers did stand up comedy to express themselves. Bob didn’t do that, that’s true. But telling things funny even if you don’t create them, that’s a talent, too. You have to have an instinct for what’s funny to be able to deliver those jokes and nobody delivered them as well as Bob Hope. It’s like asking if Frank Sinatra was less of an artist because he didn’t write his own songs. Also, I talked to enough people who knew and worked with him and they say he was a funny guy. He had a natural way. He could think funny and he was quick. You could hear it in the ad-libs on his radio and TV shows when there were flubs. Larry Gelbart said to me that Bob Hope was funnier than any of his monologues.

Do you think he was underrated?

The fact is Bob Hope’s movies themselves mostly weren’t that good. I make the point in the book that he never worked with a major director. Some, like Norman Z. McLeod and Frank Tashlin, were pretty good, some were hacks. They were mostly middle-level contract directors. But he never made a movie with a Billy Wilder or a Howard Hawks. Even Jack Benny did a Lubitsch film. Bob Hope is the best thing in his films. You look at his films through the 1940s and those are great performance. He’s totally in character, totally engaged and has got so much energy.

For newcomers to Bob Hope, which of his films would you recommend?

I would start with the “Road” pictures. The four big ones; “Zanzibar,” “Morocco,” “Utopia” and “Rio.” “The Road to Zanzibar” is my favorite for some reason, but any of those four. 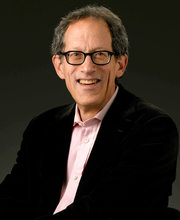 We’ll have to agree to disagree on “Road to Bali” [which Zoglin dismisses in his book]. I rank it third behind “Utopia” and “Morocco.”

You know who else likes “Road to Bali?” Woody Allen. I just don’t agree. I remembered it fondly, but when I watched all the films again, I thought it just didn’t measure up. [After the “Road” films] I would go to “My Favorite Blonde.” He works so well with Madeleine Carroll. I don’t rank “Monsieur Beaucaire” as highly as Woody Allen, but it’s certainly the most polished of his films. He’s great in it and it’s got good production values. It’s almost an ‘A’ picture. Then I would say “Sorrowful Jones.” He’s excellent in that film; that scene in which he’s praying with the little girl. I think that’s his best pure performance as an actor.

He’s also good as Eddie Foy in “The Seven Little Foys,” and that has James Cagney’s cameo as George M. Cohan.

That’s a very good film and that clip is all over YouTube. Every couple of months, somebody new sends me that clip and asks if I’ve seen it. (laughs). About 150 times.

In who, today, do you see Bob Hope’s influence?

Some of the buddy films with Seth Rogen have a little bit of the loosey-goosey, winking at the audience (of the “Road” films). Bill Murray (early in his career) wisecracking through sticky situations.

What do you hope readers take away from your book?

That, yes, Bob Hope got to be old hat and he was on the wrong side of the Vietnam War, which alienated a generation. But look how much he accomplished. He conquered vaudeville, Broadway, the movies, radio and television. He was pioneering in so many different ways as I enumerate in the book, from branding himself to doing TV commercials for his movies. He would say that Hollywood was too afraid of television and that they should be using it to sell their movies. That was a new idea. So I would hope people see how smart he was and foresightful.

Don’t know. It’s hard, because everything else after Bob Hope, to me, seems anticlimactic.