We Have a Lifetime of Stories to Tell: Julie Dash on "Daughters of the Dust"

We are republishing this piece on the homepage in allegiance with a critical American movement that upholds Black voices. For a growing resource list with information on where you can donate, connect with activists, learn more about the protests, and find anti-racism reading, click here. "Daughters of the Dust" is currently available to stream for free via the Criterion Channel and Kanopy. #BlackLivesMatter.

When “Daughters of the Dust” premiered 25 years ago it was unlike any film dealing with the weight of black history. Directed by Julie Dash, it’s many things—a tone poem come to life, a lush historical exploration of the Gullah people, and a celebration of the bonds between black women. It was also the first feature film directed by an African-American woman that was distributed theatrically. “Daughters of the Dust” eschews the kind of traditional narrative we expect in both its structure and how it portrays the remnants of slavery. Taking place in 1902, it centers on three very different generations of the Peazant family on St. Helena Island off of South Carolina just before they migrate north. It has influenced everything from Beyoncé’s “Lemonade” to directors like Ava DuVernay.

With this monumental anniversary and the beautiful restoration which was shown at the Chicago International Film Festival Sunday afternoon in advance of a re-release this Friday, November 18th, “Daughters of the Dust” is finding a whole new audience. We spoke with Julie Dash about the how “Daughters of the Dust” shows a remarkably different perspective on black history, its great costuming and what she wants to see in black film going forward.

I recently read a very interesting piece on VICE's Broadly about how young black women are giving up Christianity to practice ancestral religions, particularly West African traditions. Which makes watching “Daughters of the Dust” an interesting experience since the divide between Christianity and African rootwork plays a big part in the narrative. I’m curious what went into crafting that part of the story and why did you decide to focus on religion in that way?

Well, my intention was to take a look at synchronicity in religions. It’s not just Christianity versus more ancient African religions. It’s also bringing in Islam. It’s also bringing how we in the African diaspora began to hide our gods within their gods. So much of “Daughters of the Dust” besides was about camouflaging. Everything is camouflaged. The way the eat, the way we pray, the way we move, the way we signal one another. It’s all hidden in these non-verbal methods and means of communicating which were created to survive the period of enslavement.

With that idea of camouflage, how did that influence the film visually?

When the little boy brings the turtle and you see the Kikongo sign on it, [for] the four movements of the sun. [It’s] those kinds of symbols are embedded in a lot of the coastal homes, everyday life but only African-Americans know that. Then it got to the point where they didn’t even know, they didn’t even remember but continued to do so. The paintings of the windows and doors indigo blue for protection. The bottle tree. The hairstyles. The language. The cuisine. All of it is camouflaged. Hidden but embraced. There’s just so much of that.

Dr. Lorenzo Dow Turner uncovered 4,000 words in the English language that are used everyday that come from West African origins. Words like “okay” and “kumbaya." It’s so much into pop culture that people will say, "Oh yeah we were having a kumbaya moment." What does kumbaya mean? It’s means "come by here." They’re praying to God. Come by here and save us from this enslavement.

Then it just becomes even more deeply embedded until it becomes a part of everyday culture. 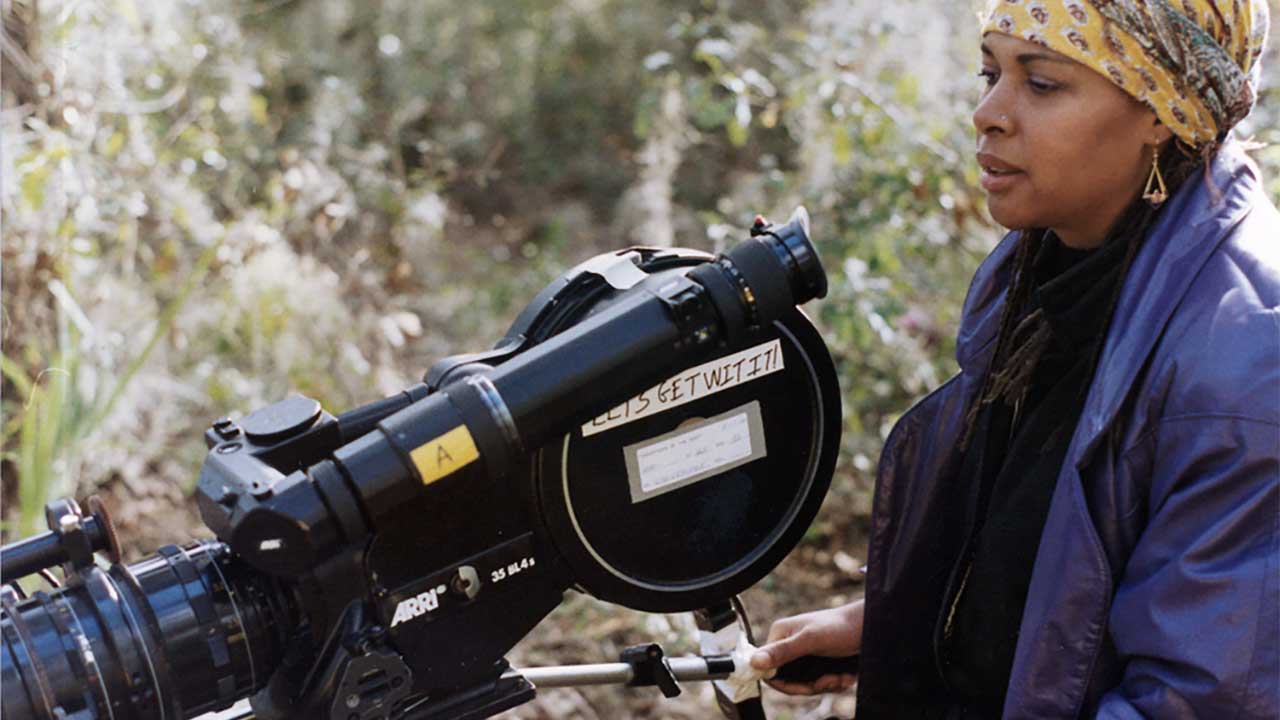 One of the great things about the anniversary and the beautiful restoration is that it will introduce the film to new audiences, especially people my age who were very young when it was originally released. I think with the conversations we’re having today, it shows how black audiences also want to learn about the filmmakers that came before and we’re curious about the creatives that inspired current directors like Ava DuVernay. What do you want people who haven’t seen the film before, and are unfamiliar with your work, to take from "Daughters of the Dust"?

Just take a look at it. Hopefully they will get something from it. Something that moves them in a way to learn more about their own family, their own history, their legacy. And to know that we’ve retained a lot of what our ancestors brought with them from Africa and there are a lot of wonderful things that we do everyday, today from that. Nothing really deep. Just a celebration of where you come from and who you are, and survival mechanisms that we employ over the years.

The film has such a powerful sense of history. Usually when we see period pieces with black characters they tend to be in the same time periods—Civil War, Civil Rights period of the 1960s, and so forth. So what made you decide to have the film take place in 1902?

Industrial revolution. Everything is new, everything is possible. This was the first generation of adults born free in the United States. Nana says she wants to see what happens to you free negroes. The elders that were all enslaved had the blue hands.

I thought that was such a powerful choice considering we get the same imagery as reminders of slavery in film.

People picking cotton as well. It’s a very narrow understanding of what happened and the work done during slavery.

That’s because we aren’t making those films. I was determined to depict the metaphor of the period of enslavement in a way it had never been seen before. So I chose to have the hands permanently stained blue by working the indigo fields. Of course, it would have worn off by then. But it’s the stain. Kind of Shakespearean. In the sea islands of the South first it was indigo, then it was rice.

But “Gone with the Wind” has become the paradigm of southern antebellum culture and that’s not even of our design. They didn’t even wear ancient hairstyles in those films. So I went back back back and studied the ancient hairstyles. And people said, 'Why did you have all those contemporary hair styles?' It was like, 'Ugh they aren’t contemporary. Hey guys, you have it mixed up here.' 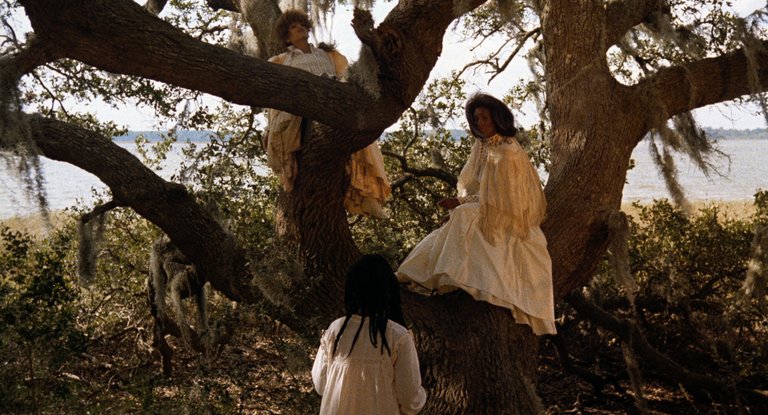 It’s interesting because those images from films like “Gone with the Wind” have taken the place of actual history for people. So audiences believe that’s what that period of time was like when it really wasn’t.

And the first “Roots” [miniseries from 1977]. It was so inaccurate.

I tried to rewatch that recently and I couldn’t get through it.

I tried to rewatch it too. Here’s a secret, I was the AFI intern on the first "Roots."

How was that experience?

I remember asking the makeup/hair person, “Why do you have their hair pressed and braids [in their hair like that]. Sort of like a Danish or Swedish hairstyle. She told me, “Well they were trying to do their hair like the mistress of master’s house.” The world view is just myopic. That’s why I hired Pamela Farrell of Cornrows & Company out of DC. She came down with her team and recreated these ancient hairstyles and kept them done and refreshed. And Yellow Mary with her pierced nose, she said “Should she take it out?” No, don’t take it out. It’s nothing new.

One thing that really struck me rewatching the film is that the hair styling and costume design was amazing. For me, great costume design shouldn’t just be beautiful, it should say something about the characters and how they move through the world. Every character had a very specific look that really suited them.

We had the costumes made for each person. Interesting enough I was just in Mill Valley with the film and two people in the audience kept saying why did they have on white? I said, they wore white in the summer then. One woman said, “Why were they dressed like that?” The [characters had a] Gibson Girl look. We dated the costumes to look ten to fifteen years older than 1902 so we could see that they were hand me downs and old things. And she kept saying, “What else did they have to wear? I never saw that before. Why would you put them in white?” She kept insisting the costumes were wrong. I said, “Look I got these costumes from photographs that are at the Penn Center on St. Helena Island.”

If we had more money there would even have more detail because they also had hats on but we couldn’t afford to make the hats. But she kept saying no because the world view of television and movies [with things like] “Gone with the Wind” always have someone with a sack on or a mammy has something plaid on. This was a special day [in “Daughters of the Dust”]. Usually people had two outfits—special clothes which was this white thing for the summer and their work clothes. That’s it. But there are people who can’t accept that.

What’s powerful about this film, and in seeing characters dressed like this, is that for black people—especially black women—we’ve always been about adornment. That’s so important. I thought that the film ended up saying a lot visually about how black people move through the world and our history.

No matter the situation even when we had to use lard in their hair. I remember my mother said they were so poor at one point they were using grease, left over grease from bacon. The flies would be around them all day long.

There has been a lot of conversation about seeing more black women in front of and behind the camera. Which makes me curious what kind of stories you’re interested in not only telling but also seeing from other black female filmmakers.

We have a lifetime of stories to tell. There are so many stories. I have a stack of screenplays I’ve been pitching. I have a miniseries I want to do called “Eleanor Roosevelt’s Battalion,” about the 850 African-American women who served overseas during World War II and that no one knows anything about them. Just so many different projects. All hands on deck. We need more people telling our stories and telling them the way they ought to be told.

This interview has been condensed and edited for clarity.

"Daughters of the Dust" is currently available to stream for free via the Criterion Channel and Kanopy.