Speaking for a Generation: Kevin Costner, Anthony Mackie and Mike Binder on "Black or White"

"You always checkmate me with that," Elliot Anderson (Kevin Costner) charges Rowena (Octavia Spencer) in a loaded early exchange that outlines the emerging conflicts of Mike Binder's new drama, "Black or White." Binder's first feature since the 2007 "Reign Over Me," the new film freely intertwines anger and sorrow in examining contentious matters of race, class, social inequality and white privilege. It's very much a work of its time as two radically different families clash over the custody rights of a young mixed-race girl, Eloise (Jillian Estell).

Costner not only stars in and produced the film, he financed it with $9 million of his own money after the traditional avenues of support among studios and affiliated dependents expressed support though balked at the purchase price of the commercially risky feature. In the movie, Costner's Anderson is a wealthy, skilled lawyer reeling from a series of traumatic experiences and now the sole provider for the young girl he has brought up since her birth. Oscar-winner Spencer is his nervy antagonist, a savvy and self-made entrepreneur who operates a series of lucrative Internet and traditional businesses. Her wastrel son Reggie (Andre Holland) is the girl's biological father whom Rowena convinces to claim his parental rights.

Binder based the story on his own nephew, the son of his wife Diane's sister who died from complications of AIDS. "I always thought there was a good story there," Binder said. "I also found there's something very special about biracial children. The little girl has the same qualities of my nephew. She understands both sides of the story. They've got an empathy and intelligence that we just don't have."

Binder wrote the script and sought out the input of Costner, who starred opposite Joan Allen in the director's earlier movie, "The Upside of Anger." Costner said he felt electrified upon encountering Binder's script. "It was a cumulative thing because it was a great writer writing great," Costner said. "As I was reading it, I was reading a great document, an absolute observer of human behavior and situation that didn't have a false step for me. That made the pages turn faster. By the end, it didn't fall apart and I simply thought, this is a miracle of great writing."

By framing his ideas through the prism of a legal procedure, Binder takes on tense and knotted issues of racial authenticity, representation and cultural identity that within the restricted environment of a single courtroom allows for little escape. "It forces you to hang in there because the judge (Paula Newsome) won't let you leave," Costner said. "In that legal procedure, you're thrown into the ring and you can't walk out of there. As long as I had the floor, nobody was going to stop me until I was done. It's only the judge that tells you what's appropriate and what's not." 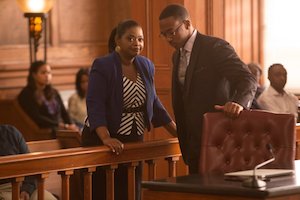 Binder required another imposing actor of heft and talent as an adversary of Costner's Anderson in order for the courtroom scenes to take full shape. Anthony Mackie plays Rowena's brother, a sharp and capable attorney guided by his own deep principles of responsibility. Mackie also praised the quality of the writing and the range of perspectives.

"It's the most specific and the smartest that I've read about the issue," Mackie said. "With me race is very important. It's not about those who are too old to change. It's about the kids who can grow up and identity with a completely different idea of what the other person across the room is expressing. Kids are born blank slates and we've made it our job to [mess] them up. That's the whole point of the movie. Nobody was fighting for their own good. Everybody was fighting about what they thought was best for the little girl. I had never read that before. I had never experienced somebody who wrote exactly how I feel, as a father with two children. Everything I read [about my character] was something I wanted to say."

Costner has put money into several of his other movies, most notably his Academy Award-winning debut work as a director, "Dances with Wolves." This was a movie out of time, too expensive for art-house tastes and too specialized for mass entertainment. It became clear this was the only viable way to get the movie made.

"You have to be pretty certain to put your money there," Costner said. "I was really certain that this had value. I was certain that other people should be considering this. At the end of the day, when it didn't happen that way, I knew that I had to do it. I had to try and figure it out. I would like to never have to do this again. Everybody that read this, the studios, agreed that it was good. It just didn't fit into the models they were doing. It fits exactly what everybody in this room is about. That's why everybody stopped what they were doing to make this film."

The distributor Relativity acquired the film after its premiere at the Toronto Film festival last fall. The movie fused the personal and the political, binding each of the participants in different ways, allowing Binder the means to tell a story suffused with private meaning, fulfilling Costner's need to create and Mackie's desire for personal significance. Those points all crystallize in the movie's centerpiece of Costner's raw, unmediated testimony. The scene evokes other films from Costner's own past, the summation his passionate district attorney offers in Oliver Stone's "JFK," or a funkier and looser groove in Ron Shelton's "Bull Durham," delivered in a pool room, about the nature of luck, talent and drive. In this movie, Costner's Anderson is hollow and vulnerable man, sodden with drink and in flight from his own anger.

"The scene was just as good the day I read it and I panicked the night before I had to say it," Costner said. "Not in the sense that I wasn't prepared, but it was too good of a speech to leave on the ground. Mackie had too good of a speech when he confronts Reggie. It's too good of a speech Octavia has when she tells Reggie it's time to pull his act together. We know what round we have to win. We can be good in every other phase of the movie, but there's a moment in time why you have Anthony, there's a moment in time why you have Octavia, and I feel very sensitive about those times. Most of the time in movies, nothing is really at stake. Something was really at stake here. I was speaking for my generation's guy, Anthony was speaking for his generation. Actors act. You search out the best parts."