Everything is Twisted Up and Strange: Stephen and Timothy Quay

Let me tell you a fairy tale. Two brothers are raised in a house with big windows, under the care of a man. They can look at the world outside but never go outside and see it. The man says he’s keeping them safe, and he tells the boys everything there is to know about the world outside: the color of plants, the sound of the wind, the shapes and sizes of objects the way people behave, and the way emotions feel and what they mean. The brothers are intrigued by the man’s explanations, but they can’t help feeling there’s more to the world than what the man tells them. One night, while the man is asleep, the brothers look closely at him and discover that his skin is made of wool, like a sweater. They find a loose thread and pull, revealing a whole universe in miniature inside the man’s stomach. But it’s different than how the man described the world to them, and looks different than the one outside their window. Shapes are different, sounds are louder and quieter than the man described, and plants don’t look like they do out the window. In here, inside the man, everything is twisted up and strange; everything is beautifully ugly; every color is more vivid. Instead of people there are puppets. The brothers look into the eyes of the puppets and suddenly they knew everything about humans and more. The puppets taught them everything there was to know about people, things the man never bothered trying to explain. 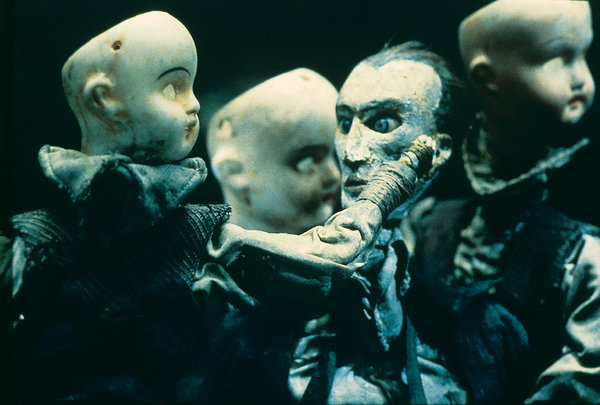 This is the story I’ve always told myself about filmmakers/animators/magicians Stephen & Timothy Quay. How else to explain their inhuman intelligence, their avant garde rhythms, that they were able to conjure a universe so alike and yet so completely different from our own. So gorgeous, yet so horrific. So fantastic, yet so grounded in the tactile realities of human, plant and animal. Since their debut in 1979, they’ve slowly come to infect our reality with the influence of theirs. They reached into fairy tales for inspiration and, pulled out a secret aesthetic history of the world that only they could see. They’re lovingly, painstakingly crafted short films have influenced everyone from Tim Burton to Terry Gilliam to Christopher Nolan, who has bankrolled an awe-inspiring 35mm retrospective of some of their major works currently playing New York’s Film Forum. He’s also completed a short, sweet documentary on the brothers (simply called “Quay”), filming them with a 35mm camera in their home studio, the first time the director has shot one of his own movies since his 1998 debut “The Following”. That is the kind of affection and dedication the Quays inspire. Right now in film schools across the country there’s one kid in class whose favourite film is “Street of Crocodiles”, and though she may never have the success of the Kubrick or Leone fans, she’ll tug on the sweater that conceals reality until she really understands the way art can unearth the secrets of humanity.

I interviewed them at Film Forum and they tell me they’re always after “elusive forms” and that puppets offer a way into a “contemplative realm,” adding a little weight to my fairy tale. Everything about the Quays is distinct, from their surreal backdrops to their spindly, whisper-soft voices, to the way their camera moves. The American-born, England-educated identical twins speak in a splendid hybrid accent, and the way say the word “puppet” is completely unique. Once you’ve heard them talk about their “poppits,” you’ll never forget it. Apt, because those puppets are what people will remember first when they hear the word “Quay.” “The eyes are the soul of the puppet” one of them says, early in Nolan’s film. That’s why the brothers coat their puppet’s eyes in olive oil, to keep them shining and looking right back into the viewer’s soul. One of the many special touches that only the brothers apply to their work. In conversation with Nolan on Wednesday night (who has used Quays’ films as visual inspiration for his own work), at the very start of their retrospective, the brothers outlined some of their mad method: Keeping cameras aimed at mirrors pointed out their studio window for a full day to capture light just right; having to move the dolly and shift focus imperceptibly a hundred times over for a few seconds of camera movement; cutting the top of a doll’s head off to fill it with straw in order to let light come through the eyes with the right intensity. Happy accidents were their masters, influencing and changing their films for the better at every turn. Anyone who’s seen their films knows that every accident made their work that much more special. “In Absentia”, a work commissioned to compliment a new piece of music by Karlheinz Stockhausen didn’t appear to fit the music at all, until they moved it 25 seconds to the right on their editing bay. Suddenly, it made sense. The German composer had only one note for the brothers when he saw the finished product. “You know guys, I’d like a little bit of blue…somewhere…” They looked at each other for a long moment, trying to figure out how to respond to the mad genius standing in their studio. When he left they happily obliged, adding some to the end credits. Another happy accident. 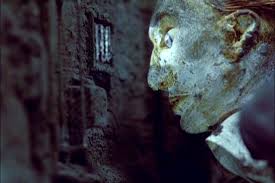 What scares the Quays, they who seem to write our nightmares for us? I was curious to know after having been watching their work since I was a teenager. “Other than losing your teeth?” They both laugh. They always laugh together in our short conversation. “Violence. Unacceptable violence. You know that it can happen so quickly…” Which is why they steer away from it in their films. “What we value in other people’s work is that sense of genuine disquiet and unease. You accept violence in Hitchcock, but what we prefer is a malaise. This feeling that’s underneath you, behind your back, it’s the undertow.” Pressed for a modern example, they come up with season 1 of True Detective. “It’s a very subtle language and we admire it because we have no desire to be violent in our own work.” They also fear for the future. Though they’ve worked beyond puppetry, designing theatre, ballet, opera and most recently a video game. Unfortunately, it’s on “pause.” “The money ran out.” They offer, clearly disappointed. It would have been a marvelous opportunity to see what these old school storytellers could have done. “We won’t do CGI.” Their latest project is a feature length movie based on Bruno Schulz’s “The Sanatorium Under The Sign of the Hourglass” (which would be 75% animation and 25% live action). They’ve built some of the puppets and sets and they’ve shot 20 minutes of it, but need funding to finish it. ”You have to pay for the studio or we’ll lose everything. The freedom to make this kind of thing. It’s an urgent concern. You’re on the edge of eclipse.” Says Timothy, but Stephen corrects him. “Extinction.” If every filmmaker was as forthcoming as Nolan about the influence the brothers have had on their work, they wouldn’t need to worry about money. Just one gesture in particular, of a fluttering motion of body parts, so fast they appear to be caught between dimensions, has been imitated more times than one could reasonable count. Hopefully the retro and the beautiful documentary will rekindle interest in the humble geniuses. I like to think we’ve earned the gift of a Quay feature, and they’ve more than earned the money to make it. They only expanded the definition of animation.

Their world is born of endless, ornate invention. Every frame is packed with singularly creepy and gorgeous detail. Schulz, who provided the inspiration for their watershed “Street of Crocodiles”, talked about the essential poetry of the everyday (“Honor the marginalia, is what we’ve always said.”), and that’s precisely what the Quays manifest. The simplest colors, plants, shapes, textures and ideas are combined in shocking ways. The inch of dust and gold-hued mildew that grows on a mirror suddenly becomes part of the way their characters view themselves, and by extension the world around them. Signs of age, of a past life for every puppet, are a form of respect, they say, to the original, anonymous creators of the objects they repurpose. The Brothers see the work of thousands of long-dead unappreciated craftsman as essential to the human experience, and by thrusting them together, giving objects like screws, combs, ladders, and pencil tips the same life that Walt Disney gave his talking animals, they honor the efforts of every architect, factory worker and machine shop hand who never got to sign his name to the products he created to help the world move forward. The eyes are the soul of the puppet, and the films of the Brothers Quay alert their audience to the soul in every discarded, forgotten object. They see what few others can, they see inside the heart of a man-made world, and to the rest of us they relate the secret information to which they’ve become privy. Their perfectly crafted fairy tale world mirrors ours and helps the rest of us see the beauty all around us.