Open Your Windows: Clotilde Courau on "In the Shadow of Women"

Philippe Garrel is sort of the Art Blakey of French cinema. There are variations in his films but his autumnal photography, breezy pacing and concise, insightful writing are the unmistakable drum tone and strong, giddy beat guiding the compositions. Garrel’s latest is called “In The Shadow of Women," another one of his sketches on infidelity. This one concerns a documentary filmmaker married to his assistant editor and biggest fan who starts seeing an archivist on the side. That’s about as cineliterate an amour fou as they come.

Perhaps sensing that this seemed too much like a critics-only affair, he hired Clotilde Courau, or as some of you may know her, The Princess of Venice. Sure it’s mostly a ceremonial title, but her regality is no joke. Sitting across from the garrulous, vivacious star it’s difficult not to want to reconsider the virtue of monarchy. She positively radiates charm; very nearly a real life version of Audrey Hepburn’s Princess Ann. But don’t let all that fool you. She’s an insanely prolific actress who’s designed audacious one-woman shows (all based around the theme of strong women who’ve been idols to her), when she isn’t working on French films. After her role in "La Vie En Rose," the film about Édith Piaf, she designed a show based around the great chanteuse and has another in the works on Anaïs Nin. And to top it all off she has an auteurist streak that might shame Kent Jones. After all it’s not even every actor who dreams of working with Philippe Garrel, let alone every member of a royal family. I spoke with her about the intense working relationship she formed with her idol on the set of “In The Shadow of Women” during the New York Film Festival

CLOTILDE COURAU: “The first Garrell I saw was “La cicatrice intérieure." I was like “What was that?!” Major. It made a huge impact on me. I got it right away. Everything. So when I found myself in a room with that man and his curly hair, so intense … I loved him right away. I was so happy to meet him. I think we clicked right away. I was so much in love with Philippe and his work. I have a profound respect for directors and when you know they’re writing the same film for years and it becomes an obsession … I have such respect for people who do that amount of work. I want to give them my best for their story, for their investigation into the subject, for their cinema, for their body of work. Because for me Philippe has a major body of work and it just gets better with age.

The film is different from the rest of Garrel and I think it has to do with its humourous side. It’s been one of his most financially successful films in France, probably because even people who aren’t on Garrel’s wavelength can go and enjoy the film. There’s more than one way to analyze it. Someone, a friend of mine, told me that they went to see it and by the end it felt like he was watching it in color. This is someone who isn’t even a cinephile, and it took him that deep into the story. 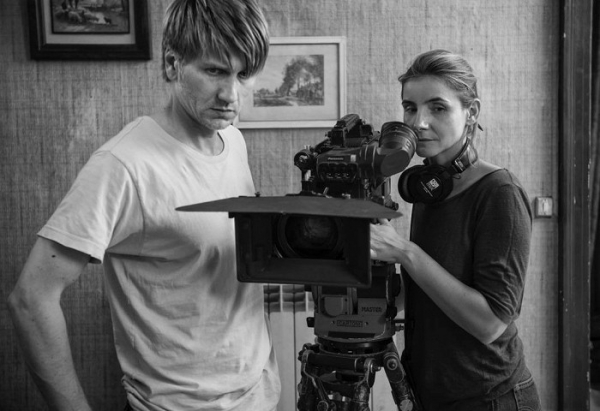 My passion as an actress is to understand the world of the director. To get into his mind as much as you can and be the actress he wants you to be, the actress he needs you to be. They’re all psychology different, especially with regard to what kind of actors and actresses they need. So that’s why I love my work. Going into different worlds, seeing the different ways someone writes a movie, going into different minds. That’s the great thing about Phillippe. You have a certain amount of time together, eight or nine weeks [of rehearsal], and you have the time to understand him. And to understand each scene. There’s no improvisation. To go into each scene and look for the truth in that situation. we get to do it over and over and over and then coming into the set for four weeks of shooting. We did it all in one take. Everything you see me do in the film, I did in one take. No second takes. It’s very intense on set but very wonderful. I’m doing another film right now with a different director who doesn’t have the time [for rehearsals]. Sometimes I’m a little frustrated. I don’t want to work with an acting coach. I want to work with the director. This director doesn’t have the time that Philippe had. I guess it’s my problem. We rehearsed once a week from January until June. Sometimes he would just rehearse us walking in the street, just to figure things out for himself. How I move, etc. To get all of that down beforehand because we moved so fast on set. We finished two hours early most days.  And Philippe was always saying that he didn’t understand why more directors don’t work this way. ”You save so much money rehearsing before hand.” So many actors tell me they don’t want to work with Philippe because they don’t want to rehearse. That it makes them feel like they’re on stage. I didn’t feel that way.

He’d tell me 'Open your windows. Be in the moment, don’t think of it, just open your window.' Very Freudian. It made sense to me. Don’t think too much, just let go. I love that phrase. Open your windows. I’d think “Oh god I’m working with a poet.” Perfect. I love it. It doesn’t make sense but it makes perfect sense. He’d also say “I don’t want a performance.” At the Q & A he said “I wouldn’t know how to do what Clotilde does, but I gave her the confidence to do it.” And I think that’s so so true. I felt so confident. I could just look at him and knew exactly what to do without speaking. We were so connected.

I hope I meet another director like him. I was hoping I could work with Chantal Akerman. It’s too bad. I’m always looking for a director who will look into my treasure chest and see something he likes. I want to be an echo chamber, for artists to resonate within me. I’m reluctant to say this but if I have a talent, it’s that. To feel the power of the writer, director and have it resonate through me. When I see the work of Nadav Lapid, he’s not shooting on film but he’s writing cinematographically. It’s far from Garrel, but… not everything is bad about the future, there’s a new way of doing things that can be really interesting. The good thing for me, is I love to experience a little bit of everything. I get to go over here and get a little of this and a little of that and maybe, hopefully, one day I’ll go back and work with Garrel.”