Finally Cannes delivers some real laughs! This morning I saw "Le Havre" by Finnish director Aki Kaurismaki, screening in competition. After several days of grim and serious films about people who lead grim and twisted lives, I wanted to cry for joy at this funny and good-hearted film. I would normally be wary of a film that anyone describes as heart-warming but this is the real deal.

Kaurismaki ("Lights in the Dusk," "The Man Without a Past" "Drifting Clouds," "The Match Factory Girl") is a master of deadpan comedy. His central characters are often glum, non-verbal types and naive innocents duped by tricksters or beaten down by a world they don't understand. The humor in his films is rooted in the deepest irony. "Le Havre" blithely portrays life as we might wish it to be, and that is the funniest irony of all.

The shoeshine man Marcel Marx is seen plying his trade at the Le Havre train station in the opening scenes of "Le Havre." He makes very little money, and the routine of his daily walk home establishes the fact that he has an overdue tab running everywhere he stops--the bakery, the grocery store, and the corner bistro. He can be a bit of a charmer with the ladies, but his long-suffering wife Arletty (Kati Outinen, a longtime Kaurismaki regular) describes him as "a big child" when she cautions her doctor not to reveal that she is about to die. 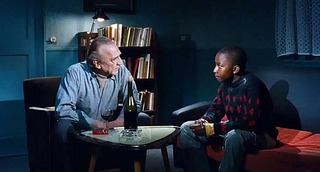 Meanwhile, on the Le Havre waterfront, authorities open a suspicious freight container to find a group of African refugees huddled inside. Before they can take the illegal immigrants into custody, a boy, Idrissa, about 13 years-old, escapes. By coincidence and fate, he ends up going home with Marcel just as Arletty is sent to the hospital for an extended stay.

Here's where things really get interesting. It's an open secret in the neighborhood that there's a young African illegal at Marcel's place. All but one of his neighbors are thrilled (the nasty neighbor is played by Jean-Pierre Leaud). The baker, who had begrudged Marcel one baguette on credit the day before, hands him an armload. The grocer, who had rumbled down the security gate at his appearance, hustles up a big box of provisions. The bistro owner is more than happy to help deflect the immigration police. Even inspector Monet, a mysterious police commander in black fedora and trench coat, offers off-the-record advice. 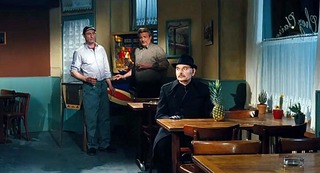 With wonderful absurdity and some droll characterizations, Kaurismaki constructs his ideal world. Marcel is revealed to be a take-charge kind of guy who tracks down Idrissa's grandfather in an immigration detention center, and subsequently forms a plan to smuggle the boy across the English Channel to his mother in London. The neighborhood pitches in to raise the cash for the payoff to the boat captain with "a trendy charity concert," featuring the comeback of Little Bob a.k.a. Robert Piazza, known as the Elvis of Le Havre.

"Le Havre" is fun, it's touching, and it's not sappy or gratuitous. Typical of much of Kaurismaki's more recent work, it has a tongue-in-cheek air of soap opera melodrama, but with homages to French directors including Bresson, Melville, and Tati. Best of all, the film has a wonderful surprise ending. Goodness has its rewards, and Marcel gets his in due time. 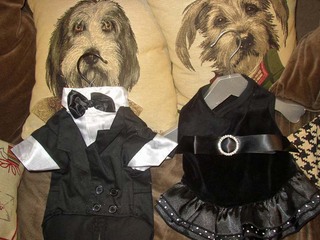 There was a canine actor in "Le Havre" too, Kaurismaki's dog Laika; she gets star billing in the press notes. I had never thought about how many dog boutiques there are in Cannes, but I passed three within a few blocks of each other yesterday. There's a mind-boggling array of canine accessories, adornments, and outfits available here. Especially popular in Cannes I suppose, are the little evening gowns and tuxedos (sorry Doberman owners, they don't seem to come in large sizes). It's also possible to dress your pooch as a sailor boy, a princess, or a pirate. See what I'm up against in looking for feline performances in this festival? Dogs are king in France.

Following the Brazilian film "The Silver Cliff," that screened way down at the Quinzaine (Directors Fortnight) venue, I took side streets back toward the Palais in order to avoid the crowded Croisette. There's an outdoor farmers market in a square along the way, and I walked down an aisle of vegetable stalls, marveling at bounty of Provence: bundles of thick white asparagus, beautiful zucchini with the blossoms still attached, lovely lettuces, and big plastic buckets filled with many varieties of olives. There was homemade mustard and jam, local honey, and an open tub of pale, pickled lemons. I wish I could take it all home. 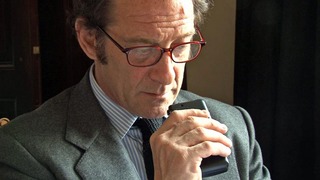 Food was important in my last film of the day, Alain Cavalier's "Pater," screening in competition, and featuring the director himself with actor Vincent Lindon. In the opening sequence, hands prepare two plates of food while the two men converse. The white plates are heaped with delicacies that include sliced truffles, shredded tuna in olive oil, and whole hot peppers on delicate stems. A pan of asparagus is put on the stove to simmer.

Cavalier and Lindon discuss a film project in which they will play elected officials and cabinet ministers. They begin improvising their roles. At this point it becomes evident that "Pater" is a film steeped in French politics. As the two expound upon the imaginary legislation they will enact, the white-collar crooks they will apprehend, and the corruption they will shut down, the French contingent of the audience was in stitches. I was clueless, but duck sausage, pan-fried leeks, and creamed artichokes were served up at a picnic in the woods, along with capitalism and globalization. I could go for some now (the creamed artichokes, I mean). 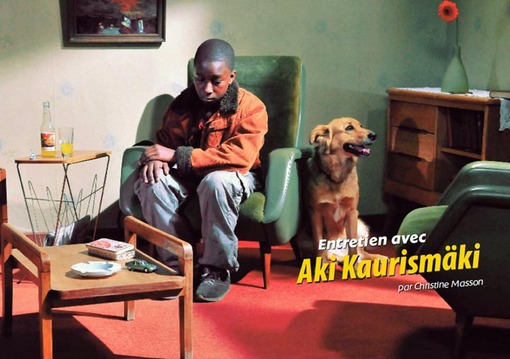 (Above: From the French press kit for "Le Havre.")