Greetings from Hell on Earth.

Above, past the pavement depicted in the picture, is the sea. I’m not sure which sea it is. Something tells me to say the Mediterranean, something else tells me it’s a different sea, but whatever sea it is, there it is, a boundless-seeming stretch of water bordered, I am told, by a very nice beach which I hope to step on before I leave here. “It’s kind of depressing,” a colleague bemoaned last night, “going to film festivals in such beautiful locales, and then having to spend your time cooped up in movie theaters all the while.”

My counter argument was that once you left the movie theater, you weren’t confronted by either sub-zero temperatures and mountains of snow or unusually moderate temperatures and rivers of slush, each condition accompanied by the sight of hundreds of industry pod people yammering into their Blue Teeth. I can’t imagine what film festival I might have been referring to with that observation. In any event, the film festival I’m currently attending is Venice’s, the photograph above is of one of my views on the walk from my hotel to the Casino and the Cinema Palace and all the other venues hosting screenings. My function here is twofold. First, I am here as a representative and perhaps ambassador of RogerEbert.com. In this context, I’ll be on a panel for the Biennale College, the arm of the festival that workshops new films by new filmmakers. The pictures I and my fellow panelists will “coach,” so to speak, are “Baby Bump,” directed by Kuba Czekaj, “The Fits,” directed by Anna Rose Holmer, and “Blanka,” directed by Kohki Hasei. I’ll get into these films in a bit more detail after the panel, and of course I’ll give an account of the panel as well when the time comes. But for now, I’ve got my pass and my festival work ethic, which has me up at six in the morning to catch the first screening of the day, 8:30 a.m. 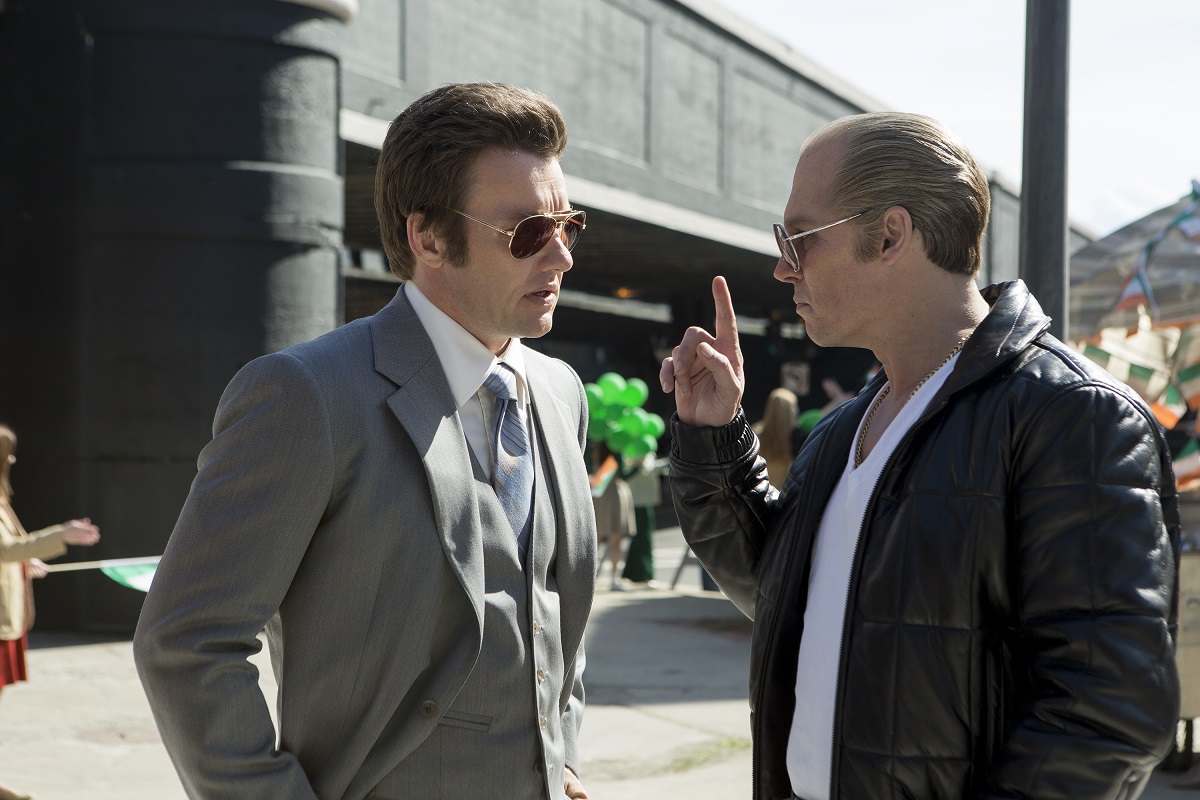 And that, this morning, was of director Scott Cooper’s eagerly-awaited “Black Mass,” an account of the rise and fall of notorious South Boston mobster Jimmy “Whitey” Bulger, a rise aided and abetted in no small part by the Federal Bureau of Investigation, as it turns out. This picture rides into town with no small amount of buzz, much of it generated by Johnny Depp, reputed to be making a return to “serious” acting in the role of the brutal gangster. Personally, I don’t think Depp’s work has been any more or less serious in the Captain Jack Sparrow years than it’s ever been; his whole mode as an actor, as far as I’ve seen it, has ever been as much commedia dell arte as it has been Method, or whatever you call it. But this is a discussion for another time. And yes, I found Depp relatively impressive as the balding, blue-eyed, stiff-backed killer. Unlike the Tony Montana of “Scarface” or the “Henry Hill” of “Goodfellas,” Bulger here is not a particularly hedonistic gangster. It’s all about turf, and looking after your own (until they stop being your own, however they might do that), and getting what you believe is coming to you. From the very beginning Bulger and the subordinate low-lifes make a big show about how the lowest thing you can be is a “rat.” On the other hand, as Bulger puts it to one associate, “There’s informing, and there’s informing.” In the end, no matter how you want to parse it,  everybody is a rat except for one guy.

“Black Mass” focuses on the unlikely alliance between Bulger and law enforcement, in the person of neighborhood kid turned cop John Connolly  (Joel Edgerton) who makes an odd proposition to Bulger: help the Feds get Boston’s Italian Mafia, and Whitey can run his operations virtually unchecked. This is one of those too-good to be true arrangements, as you know if you’ve read up on the real-life case on which this picture is based. Cooper tells it well. Comparisons to the likes of “GoodFellas” and particularly the South-Boston-set “The Departed” are inevitable, and yes, Cooper does use a Rolling Stones song on the soundtrack (it’s not “Gimme Shelter” so there’s that), but his storytelling style is quite different from Scorsese’s. Very little grab-you-by-the-back-of-your-head exuberance and much measured tautness. It’s almost as sober as Bulger himself, except when it’s barely sidestepping the trap of sentimentalizing him. Cooper has said in interviews that he did not want to portray Bulger as a sociopath. The only problem with that is that it’s hard for a guy to murder people in the double digits without being a sociopath. I would argue—maybe—that Bulger was a sociopath who was good at compartmentalizing. In any event, Depp portrays the guy as a quiet, largely humorless menace—“Strictly criminal,” as one of his cronies puts it—and as usual he’s particularly good with the physical stuff: the stiff walking gait, the definitive way the character leans back against a wooden dining room table, that sort of thing. Edgerton counters as an exceptional performing sparring partner should as his self-delusion overcomes his moral scruples.

I always enjoy a good Warner Brothers gangster picture, going all the way back to the ‘30s. And, in point of fact, “Black Mass,” with its exceptional character actor supporting cast and cop-both-against-and-with-criminal story dynamic brought to mind more of that legacy than it did the more recent Scorsese forbears (this despite the fact that the movie contains a variant of the legendary “How am I funny” scene in “GoodFellas”). While the movie has a very scant female component (Dakota Johnson, Julianne Nicholson, and Juno Temple are the only women under 50 to be seen) their characters ARE given something a little more to do than complain to their husbands, so that’s also a plus. “Black Mass” isn’t an instant classic, but it is undeniably sturdy and solid, and that might be enough for it to capture a good audience.