A great film festival offers movie lovers a wide array of offerings on its opening weekend. Fests like Sundance and Toronto are downright overwhelming in just their first 72 hours, presenting dozens of films from around the world and from every possible genre. Tribeca, which started this week in New York City, has a similar model, presenting an extremely diverse slate of films. The first three I’ve seen from this year’s iteration couldn’t have less in common, and yet they all now share the Tribeca seal of approval.

The best of the three is Neil Berkeley’s “Gilbert,” a documentary about the singular Gilbert Gottfried, a stand-up comic and actor like no other. The love for Gottfried in both the filmmaking and the interview subjects assembled to discuss his life is palpable. This is not just a piece of fan service—it’s something of a love letter, a piece that humanizes a very private celebrity, and reveals the complexity and daring of his art. Gottfried is one of those comedians who is stunningly unafraid on stage. He does not care if you hate what he’s doing. In fact, he may like it more. And yet he’s not an abrasive, aggressive loudmouth off stage. He’s a father and a husband, an often-shy man—he just happens to be willing to tell the jokes that others won’t. Sometimes that willingness gets him into trouble, and “Gilbert” captures every side of Gottfried, including the one who sometimes fucks up.

At its best, Gottfried feels like a tribute to Gottfried, in which his colleagues, friends, and family members tell stories about the man. Legends show up—including Bill Burr, Artie Lange, and Jay Leno—but Berkeley wisely keeps returning to the people who know Gilbert best, including his sister and his wife, Dara. It’s often a love story about Dara and Gilbert, a man no one thought would settle down. “Gilbert” hits all the expected beats—“Aladdin,” “The Aristocrats,” the Aflac firing—but it also offers depth to a man who has stayed out of the spotlight. We learn about his never-approving father, who died when Gilbert was only 18. The idea that his pop never saw him become successful arguably fueled much of his passion to succeed. He’s trying to impress someone who’s gone. And the film is personal and moving when discussing the death of Gottfried’s mother. I have to believe that “Gilbert” proves, without question, that both of them would be incredibly proud. 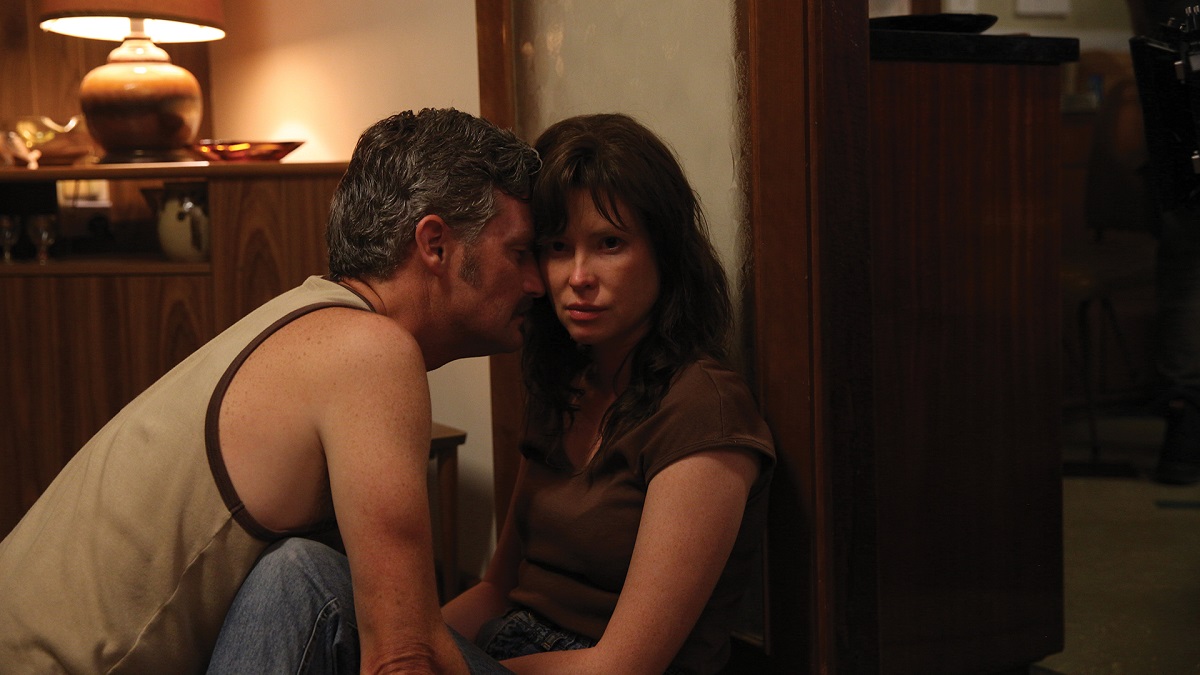 On a totally different wavelength than possibly anything else you’ll see this year is Ben Young’s directorial debut, the harrowing and disturbing “Hounds of Love.” There are certain films that a critic can respect for the quality of filmmaking on display and still never want to see again. “Hounds of Love” falls into that category, artistically shining a light on a very disturbing, violent scene in an Australian suburb in the ‘80s. It’s a film about rape, kidnapping, and abuse that will shock pretty much anyone who sees it, but it’s also a film that makes it very clear that its auteur has a great eye for composition and a daring approach to storytelling.

That approach could be called unapologetic. “Hounds of Love” is about a couple—John and Evelyn White (Stephen Curry & Emma Booth)—who have a sociopathic hobby. In early scenes with them, Young peppers the audio with the sounds of clanking handcuffs in the background and a woman’s muffled cries. He regularly returns to shots of blood splatter on the floor, allowing your imagination of what these two are doing to fill in the horrifying gaps not provided visually. They’re serial killers. However, we quickly come to discern that Evelyn is a victim too. When they kidnap Vicki (Ashleigh Cummings) and begin their torturous routine, she realizes this as well, trying to drive a further wedge between the two of them. In a sense, both Vicki and Evelyn are victims of John’s abuse, just to different physical degrees. Evelyn’s handcuffs are emotional and mental.

All three of the leads here are very committed, but Emma Booth captivates as a woman who was clearly once one of John’s victims, and is now stuck in his spiral of madness. It’s a daring, physical performance, as we watch a woman unravel. Young also displays a strong use of space, shooting long takes down hallways and through doors, making the very home menacing. And he uses music well, particularly in a Tangerine Dream-y score that increases tension and a great use of Joy Division near the end. However, no Kate Bush. 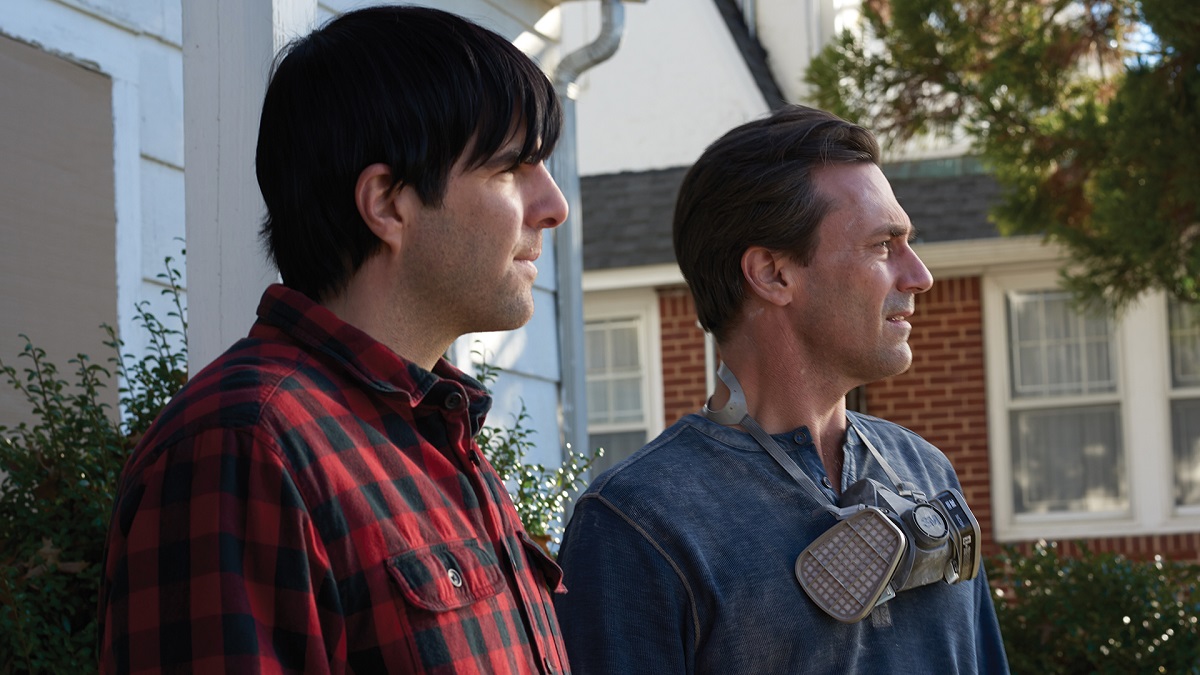 Finally, there’s the relatively star-studded “Aardvark,” a film that hits more of the “Festival Expectation” beats than the other two but doesn’t really deliver anything memorable. This is an odd little dramedy about brothers, fame, and finding love that never comes together as more than a series of quirky moments. A few of the performances elevate it slightly, but it’s shockingly forgettable and too tonally inconsistent to register as more than an interesting failure.

Josh Norman (Zachary Quinto) is a troubled man. He’s an introvert, who struggles to get through daily life, but he’s started seeing a therapist named Emily (Jenny Slate) for help. He reveals to her that he has a famous brother named Craig (Jon Hamm), and he just happens to be in town for a visit. Or is he? Josh “sees” Craig everywhere, convinced that his actor sibling could be anyone he meets, including a homeless woman and a police officer. In other words, he hallucinates that his brother is everywhere. Josh is an introvert, his brother is the very-extroverted profession of an actor—how will these two impact each other?

The answer is not much at all. Writer/director Brian Shoaf spins the story in another direction, allowing Craig and Emily to develop a love story while Josh also gets a romantic arc with a mysterious woman (Sheila Vand), who he meets in such a way that we have to worry if she’s real or not. The quartet of actors give it their all, and I really hope to see the charismatic Vand (“A Girl Walks Home Alone at Night”) in more soon, but “Aardvark” is comically and emotionally limp. It’s a film that feels as uncertain as to where it’s going as its protagonist.