A couple of the documentaries in the Tribeca Film Festival are portraits of single-minded obsession. Obsession is always a rich topic for film-makers (who are mainly obsessives themselves). What is it like to devote your life to one thing and one thing only?

In "Gored," director Ido Mizrahy follows around Spanish matador Antonio Barrera as he prepares for his final bullfight. Barrera has the distinction of being "the most gored bullfighter in history" (23 gory gorings). Barrera is not all that compelling a figure in terms of personality (he has a constant poker face), but what he does, and how he thinks about what he does, is what makes "Gored" so memorable.

Barrera learned early on that he lacked the grace and balletic athleticism of other matadors and so had to distinguish himself in other ways. A reporter on the bullfighting beat in Spain remarks that Barrera takes risks that other matadors do not. He courts death. He seems to yearn for it. The ritualistic aspect of the matador's world (the dressing ritual, for example) is captured in minute detail, but what is compelling is is Barrera's constant almost dead-eyed expression of inner focus. He is in the room with his wife, his kids, his dresser, but his mind is always in the ring.

His desire, he explains, is "to expose myself completely, every time." In a way, Mizrahy's documentary is not about an obsession with bullfighting; it is about one man's obsession with death. Barrera talks about death constantly. He rhapsodizes about it (always with the poker face, giving an eerie effect). Bullfighting forces him to display courage, a "lost" value in today's risk-averse world. Barrera's wife sits on the sidelines. She has chosen to be with a man who says his relationship with the bulls is "the most intimate relationship I have ever known" and she accepts that.

With a less-than-stellar reputation in Spain, Barrera found real fame in Mexico and other Latin American countries. Footage of his various gruesome gorings pepper the narrative. The blood is real, the injuries are real (Barrera's body is covered in scars), but there is a theatrical element to these events that is grotesque in nature. He is carried out of the ring on a stretcher, and then he wraps a tourniquet around his injured leg and rushes back into the ring. The crowd goes wild. It's all so violent that it calls into question the entire pursuit. Barrera's obsession is so intense that one wonders, honestly, how he will fare once he has retired. Where in real life would he ever find that "high" again?

Near the end of the film, Mizrahy includes footage of animal activists protesting outside a bullfighting ring. That is the only moment when the controversy surrounding bullfighting is addressed (and it's not really addressed at all). The protests don't exist or count in any way whatsoever in Barrera's hermetically-sealed world. Mizrahy is not interested in weighing the pros and cons of bullfighting. He is more interested in examining the driven personality of a man who has spent his life caring only about one thing. It's not a particularly inspiring portrait, but it is extremely interesting. 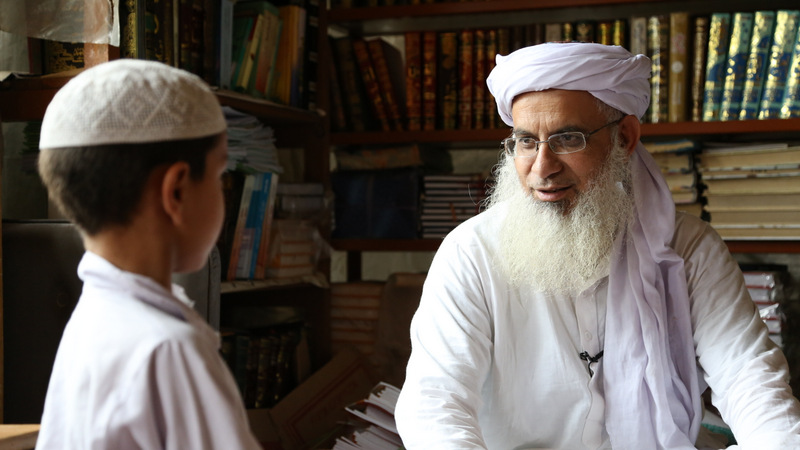 "Among the Believers," co-directed by Hemal Trivedi and Mohammed Ali Naqvi, is a far more disturbing portrait of obsession, with very real and cataclysmic political consequences. It looks at the institution in Pakistan known as The Red Mosque, which trains children for jihad and martyrdom. Aligned with Osama bin Laden, with the Taliban, with other militant groups, The Red Mosque has had a troubled history in Pakistan, especially post-911 when President Musharraf started to crack down on such organizations. The Red Mosque, at the crossroads between the forces of extremism and an open society, made international news recently in the wake of the terrorist attack on a school in Peshawar, in which 145 people were killed (132 of them schoolchildren). Imam Mualana Abdul Aziz, the mosque's leader (who became infamous during the violent siege on his mosque in 2007 for trying to escape hidden in a burqa) refused to condemn the Peshawar attack in a television interview. Another group claimed responsibility for the Peshawar attack, but the Red Mosque has become the focus of the hatred of ordinary citizens who have had it with the violence. Enormous protests against the Red Mosque erupted all over Pakistan. On December 26, 2014 a judge called for the arrest of Aziz. On January 19, 2015, Aziz was placed under house arrest.

These are world events, well-known to everyone, but what "Among the Believers" does is go inside the Red Mosque, meet the students who live and study there, and meet Maulana Aziz, the main interview subject of the film. A soft-spoken man, his responses to questions are gentle and rote, showing his single-minded belief in his cause. The only reason to go to school, he says, is to "spread the message of Islam through prostelytization or jihad." Because the mosque schools are free, many poor families drop their children off there, not realizing the rhetoric that the children will be drenched in from morning until night. One worried father wants his son to come home, but the son refuses. The students spend their days memorizing the Koran, en masse, rocking back and forth, chanting in unison. When asked what the verses mean, one young boy says, "We don't know what the verses mean. We just have to memorize them."

On the other side of the fence is Dr. Pervez Hoodbhoy, a nuclear physicist and anti-militancy activist. He holds seminars on the inner workings of the Red Mosque, what they teach and how they teach it, enlightening people about what exactly is going on inside. He considers their dogma to be "poison", and the children being taught are so young, so malleable, they don't know any better. In many cases, their desperate parents have no other option but to send their children there. The problem is systemic and much larger than the Red Mosque, although militants from the Red Mosque bully public schools regularly, threatening to throw acid in the faces of the girl students, etc. Hoodbhoy expresses sadness about the militancy that has entrenched itself in Pakistan ("It's such a different Pakistan than what it used to be," he says). Imam Aziz sees it another way. The government has failed the people of Pakistan, creating a power vacuum and "Somebody's got to fill it."

Education is the key to all of this, which is one of the reasons why the attack on the Peshawar school was so significant. "Among the Believers" travels to a small village run by an uneducated village chief named Tariq. With his own money, Tariq built a village school to combat the influence of the local Red Mosque. In Tariq's school, children are taught regular subjects and have recess. One 12-year-old girl, Zarina, had been a student at the Red Mosque and escaped over the wall. The girls were beaten if they didn't wear the full burqa. They were given one piece of bread a day. When Tariq's village school is closed (after an attack by militants), Zarina stands at the school window, pointing out which desk she used to sit at. It's heart-wrenching on the most simple elementary level. It brings home what is really at stake. It's not just that young children are indoctrinated with violent rhetoric in the Red Mosque itself. It is that the militants are invested in limiting the options of others, little innocent girls like Zarina who have nowhere else to go.

Trivedi and Naqvi put together this multi-tentacled story using a daunting variety of footage, news reports and archival film mixed with interviews. It paints an extremely grim picture. The interviews with Aziz are incredible, a glimpse into a world rarely seen so up close and personal. The film shows the end-result of single-minded black-and-white thinking, especially when it comes to children. "Among the Believers" provides no solutions. The concept of jihad is not as narrow as the Red Mosque teachings, as Tariq insists at one point, "Getting an education is a jihad. Building roads is also a jihad!" Figures like Dr. Hoodbhoy and Tariq are the everyday heroes, regular figures representing enlightenment and possibility, who provide practical counter-points to the dominant narrative. "Among the Believers" brings us up to Aziz's house arrest in January of this year, and so the story continues to unfold.