It seems shamelessly inevitable to tie together the two TIFF titles that feature a transgender theme, especially since they are such disparate enterprises. But such matchmaking is pretty much unavoidable. Both had their big public premieres on the same day over the weekend. And their timing is impeccable considering the fascination over Caitlyn Jenner continues apace. But neither movie comes as close to honestly capturing what it feels like to be a stranger in your own body than 1999’s “Boys Don’t Cry.”

The more satisfying of the pair, “The Danish Girl,” is a highbrow period piece that at least has the wherewithal to face the medical reality of primitive gender-change procedures head on. It also isn’t shy about wearing its somewhat kinky sexuality on its silken-to-the-touch sleeves.

"About Ray," on the other hand, is a mainstream family affair that too often relies on sitcom-ish punchlines instead of meaningful dialogue, while giving short shrift to the very character that should rightfully be the reason for its existence.

Let’s dish about “Danish” first, which stars the Oscar’s current reigning champ, Eddie Redmayne, who won for his pull-out-the-stops portrayal of Stephen Hawking in "The Theory of Everything.” For his next biopic trick, he embodies Einar Wegener, an artist in 1920s Copenhagen who is best known not for his moody landscapes but for being a trans pioneer after evolving into Lili Elbe.

At first, the revelation that her androgynous husband has a thing for female apparel is a turn-on. She has already surmised that they share a kinship that goes beyond simple heterosexual love. As she reveals to a friend that kissing Einar “was like I was kissing myself.” And Gerda, who has begrudgingly stood in the shadows of her more successful spouse, also experiences her own creative awakening as she finds her muse in the ever-more-present Lili. More than most biopics, "The Danish Girl" avoids the trap of forcing a love interest to do little more than support the main character. That is, until it reaches its predestined tragic conclusion.

Tom Hooper, the Academy Award-winning director of “The King’s Speech” and “Les Miserables,” is not known for graphic sex—although he did a fine job capturing Benjamin Franklin’s romps with prostitutes in his “John Adams” miniseries for HBO. But he does better in the early scenes here where the young marrieds indulge their lust than in the more stilted dialogue-heavy moments in large open rooms filled with canvases and little else. Too often “The Danish Girl” is more a still life than a moving picture despite a soaring score and painterly visuals.

The Cinderella-esque sequence where Lili makes her public debut at a fancy ball—fully orchestrated by Gerda, who assists with hair and makeup—could prove uncomfortable for some to observe. But this key sequence could also easily be what seals the deal on Redmayne being granted another go at a trophy.

Oh so sweetly coquettish with that shy toothy grin, the statuesque Lili lights up the room and even upstages her lovely wife. Is it over the top that so many men are seen admiring her gawky charms as she flutters by? Perhaps. But Redmayne’s dedication and utmost respect for his character does make for some riveting hold-your-breath moments even if certain turns of events made the less-sensitive side of me think of Jack Lemmon and Tony Curtis in “Some Like It Hot.” 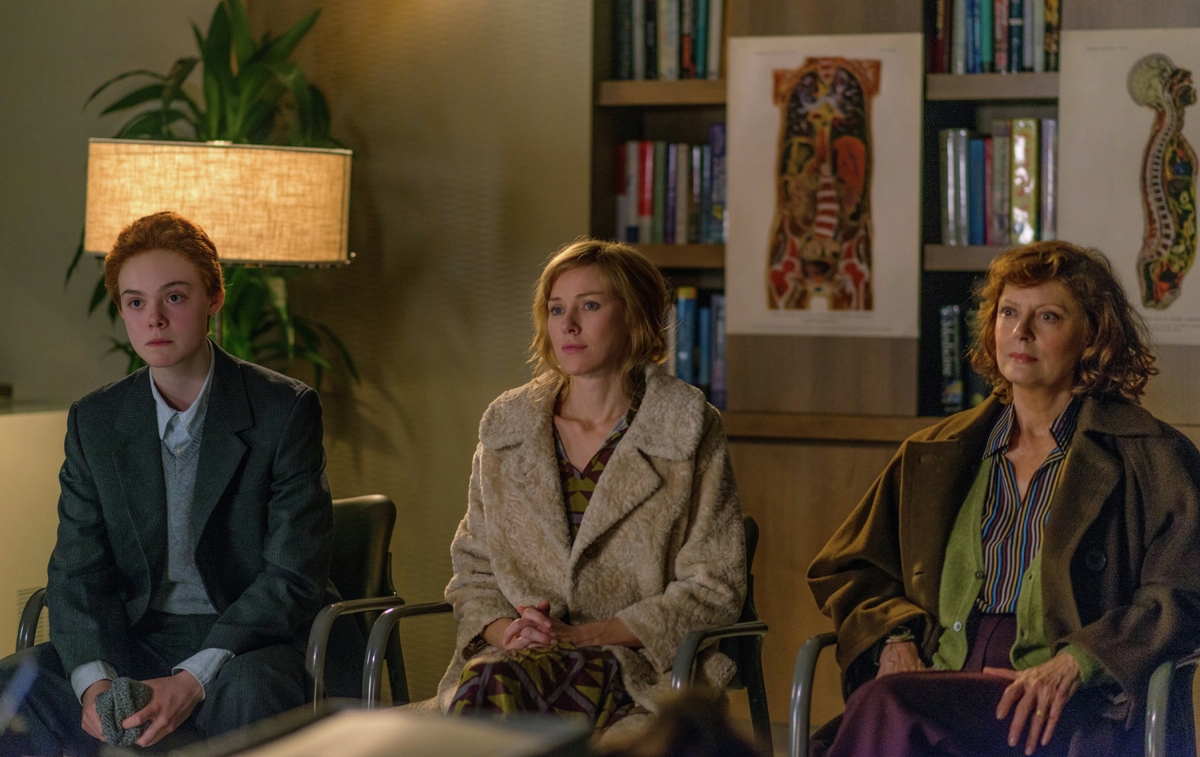 The primary problem with “About Ray” is that it really isn’t about Ray. Elle Fanning emits dude attitude in abundance as a 16-year-old living in New York’s East Village, in one of those only-in-the-movies spaciously funky extended-family abodes that somehow the characters manage to afford.

Eager to undergo hormone therapy and bearing no doubt that he is a male trapped in a female body, Ray (formerly Ramona) possesses that twitchy adolescent-boy nervous energy and a craving to get physical, whether performing skateboard stunts, pumping iron to flesh out his thin elfin physique or dancing wildly to loud music. And, just to erase any doubt, director and co-writer Gaby Dellal thoughtfully makes sure the camera catches glimpses of Ray’s thatchy armpit hair whether we want to see it or not.

Bullies seem to be de rigueur in the growing body of trans films—Lili runs into one as well. But the real barrier to Ray becoming who he is meant to be isn’t some homophobic street punk but Maggie, Ray’s conflicted single mom played by Naomi Watts who, unlike her transitioning son, is beset with self doubt and a fear of having to face a past that she has too long denied.

Namely, she has to hunt down her child’s birth father so he can sign the consent form, a technicality that occupies far too much of the story. You would think that for the sake of her child’s happiness, she would simply woman up and do what she has to do. If only to stop Ray from saying such melodramatic nonsense as, “I’m not having a shitty day mom, I’m having a shitty existence!”

Providing some questionable comic relief is Susan Sarandon as Dodo, Maggie’s gay mom who isn’t completely onboard with suddenly having a grandson.  Her take on the matters at hand: “Why can’t she just be a lesbian? She likes women.” Maggie, in a rare sensible outburst, counters: “Authentic is what he wants to be.”

After her character’s trans cred is fully established, Fanning is pushed into the background and “About Ray” starts to feel like a bad Neil Simon comedy including more than one road trip. It is beyond me why Honey, Dodo’s life partner (Linda Emond), has to be defined by her affection for lottery tickets. I was equally flummoxed by Dellal’s choice to showcase a wadded-up consent form as it rolls around the backseat of Maggie’s car. By the time a cold stuffed Cornish game hen—dangling rosemary spring included—is used to ease the swelling of Ray’s bully-induced black eye, you might want to leave the theater.