Sundance 2017: The Natural World in The New Climate Sidebar and Beyond

Robert Redford's pair of passions, art and nature, came together this year in a sidebar at the Sundance Film Festival titled The New Climate. The collection of seven feature films, three shorts, three VR pieces and a panel discussion were spread throughout different sections of the festival, appearing in New Frontier, the World and US Documentary Competitions, and the Short Film Program. The initiative came about when festival organizers noticed a tapering off of environmental films being submitted to the festival. John Cooper, festival director, explained at the opening day press conference, “We weren't panicked, but let's do something at the festival where we start talking about this as a very real thing. Is there a reason? Is it from the funders, is something not happening to make people aware? And then the films started coming in and it self-corrected.” The Sundance Institute has a funding initiative of the same name as part of their documentary program, Institute director, Keri Putnam said, “About a year ago at this time we did a partnership with the Rauschenberg Foundation and several other funders to bring artists together with experts in this topic area to really explore what narratives could be created.”

A centerpiece for The New Climate program was the Power of Story Panel moderated by Amy Goodman. Onstage was Al Gore, Jeff Skoll (founder of Participant Media), Dr. David Suzuki, Mohammed Nasheed (former president of the Maldives), and filmmaker Heather Rae, with special guest in the audience, Standing Rock Sioux Chairman David Archambault II, also speaking. While most of the discussion focused on possible policy and economic tools that could be employed to combat the climate crisis, there were a few points that felt particularly relevant to the filmmaking community. Dr. David Suzuki, the decades-long host of Canadian TV science show “The Nature of Things” cited the importance of education, “If you're illiterate about science you won't be able to help shape how science is applied to industry.” This idea of film as educational tool can be seen through much of The New Climate program, but the panel went deeper than that. Perhaps the most powerful moment occurred when Heather Rae called attention to the very structures of the film industry itself:

“As we invigorate the conversation around climate and how we are going to create a future for ourselves, I think we have to be talking about these systems of supremacy that have shaped the world as we know it, and speaking to the entertainment community, of which I'm a part of and so are all of you, Hollywood generates 80% of the world's consumable media content in film music and television ... if you look at the world, about 4 ½ billion people are Asian, 1.3 billion are Indigenous, just over 1 billion are African, 600 million are European. We are in an industry that is creating a completely inauthentic view of what the world is. The entertainment industry is a systemic expression of white supremacy and we're not talking about these kinds of things, we are literally just pretending. And we're just pretending that all of this just is what it is, and it's simply not true. We have to be in a space where we're actually talking about these kinds of things, and actually being willing to dismantle these systems.”

Rae's insight hits upon a critical aspect of the discussion that is often neglected: our willingness and commitment to fundamentally change the structures that we have for so long taken for granted. It's undeniable that films can be powerful tools for social change, but if they are all based on a familiar (and arguably flawed) premise, then the reach of the solutions is severely limited.

For Redford, documentaries are a crucial tool in our changing media landscape:

“Documentaries have become more and more important as the news media world has shrunk into more of a sound bite world. It's so clipped and short, it gives you no time to digest, no time to contemplate, it's already moving on to the next event. So therefore, I feel that documentaries are having a more important role than ever because it becomes like long-form journalism, it gives a chance to really tell the story so the public can digest it and see how they feel about it.”

The line between art and advocacy skews towards advocacy in most, but not all, of The New Climate films. Films such as the moving Al Gore vehicle, “An Inconvenient Sequel,” and “Chasing Coral,” Jeff Orlowski's follow up to the successful, self-distributed, Sundance film “Chasing Ice” (2012), are made explicitly to incite action. Social media campaigns play huge roles in both film's outreach. At the Q&A at the end of “An Inconvenient Sequel,” Gore made an entreaty to the audience:

“One person can't stop it as I said before; one person can make a difference in joining with others and tapping into the strength of numbers to build this movement even stronger and make it even more powerful. So, my fondest hope for what lies ahead is that this movie will help to catalyze the growth of that movement and you—particularly this audience seeing it before almost anyone else and tweeting it and going onto social media and spreading the world and making sure when the theatrical release occurs that you give people your opinion.”

In a case study at the Creative Distribution Bootcamp, organized in part through the Sundance Ignite Program, “Chasing Coral” producer Larissa Rhodes, talked about how their filmmaking team was firmly committed to de-politicizing climate change, so that the message of the film could reach as wide an audience as possible. Even the most cinematic documentaries in The New Climate program, such as the gorgeous verité film, “Plastic China,” which follows the personal story of a little girl living in a plastic recycling center in rural China, passed out wooden spoons after the screening and encouraged festival goers to use the hashtag #lessplastic when talking about the film online. 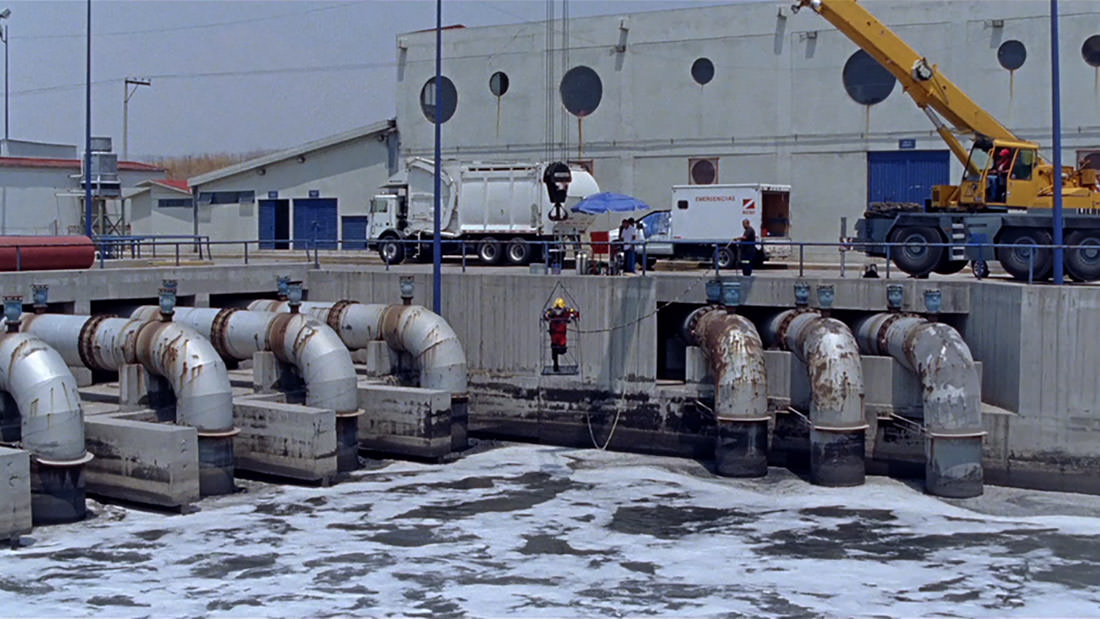 The few outliers to this overpowering ethos of film-as-incitement-to-action came in the Shorts Program. The three shorts of The New Climate program explored environmental issues from less direct angles, and in doing so allowed for a different access point to the content. Sky Hopinka's beautifully crafted meditation of an Alaskan island in the Bering Sea, “Visions of an Island,” played in Short Program 4. Hopinka's film gave time and voice to a place, creating a visceral connection to the natural beauty of the landscape through camera movement, rhythm and audio, as opposed to an explicit call to action. Also in Shorts Program 4 was “The Diver,” a beautiful and straightforward portrait by Esteban Arrangoiz of a sewage diver in Mexico. Finally, Jack Henry Robbins' inventive “Hot Winter: A film by Dick Pierre,” played in the Midnight Shorts section. In the guise of found footage, the film centers around re-discovered footage of one of the first films to depict climate change, a porno from the 1980s. As their tagline reads, “All sex scenes have been removed as to not distract from the conscious message.” The formalistic experimentation of these three shorts allow the content to enter the viewer's psyche through different pathways—the linkages between actionable steps to stopping climate change less clear, but the importance no less weighty.

Taking a moment to explore beyond The New Climate program, I was curious how the fiction films at Sundance this year treated the natural world as well. Throughout many of the films, there were shots looking up at the sky, through trees, sometimes with birds flying past. For the most part, I have to report that the natural world, and the age of the Anthropocene, did not figure into the themes of the fiction films this year, but perhaps glimmers are starting to appear. The idea of honoring indigenous knowledge played out in Ernesto Contreras' “Sueño en otro idioma,” in the World Dramatic Competition. And forest scenes figured prominently in “Kuso,” “Bitch,” “Berlin Syndrome,” and “I don't feel at home in this world anymore.” These forest sequences always appeared at moments of transformation— either as catharsis for individual characters or turning points in the overall narratives, while the forest represented danger, but also renewal. Though faint, this does reflect some notion of reverence for the power of nature. As the situation of our planet becomes more critical in coming years, it's only natural to expect that artists and filmmakers will start to reflect more on the inseparable role the natural world plays in all of our lives.