Sundance Report: "They Came Together" and "Cooties"

For my final day in Park City, I was on the hunt for comedies that would stave off any sort of looming sadness I had about the festival coming to a close.

Before that quest, I began with a second viewing of "Listen Up Philip", Alex Ross Perry's new film that I wrote about yesterday in preparation to interview Perry. This second viewing solidified my positive response. I can only hope that some distribution company takes a chance on this film.

Next up (after a long interview with Perry) was "They Came Together", David Wain's orgasmic spoof of every romantic comedy in existence. The film tells the story of Joel (Paul Rudd) and Molly (Amy Poehler), two quasi-lonely souls who are actively looking to fall in love after heartbreak finds them both.

The film, which doesn't contain a serious or realistic bone in its body, plays everything for laughs. And that's okay, considering the sharp screenwriting of Michael Showalter and Wain. The two long-time colleagues employ a flashback device as Joel and Molly hilariously and meticulously explain their made-for-movie romance over dinner to an increasingly uninterested couple.

As the self-aware cheesy narrative progresses, we see the natural trajectory of most relationships unfold. Joel and Molly fall in and out of love, wandering from one bad rebound relationship to the next, fully aware that they are meant for each other. To be clear, the film is nowhere near as whimsical as that description might suggest. With a dash of irony Wain makes sure to leave no romantic cliché unexplored.

From the opening shot to the closing credits, I wasn't entirely sure what to make of "They Came Together." It's clear that Wain has a penchant (from "Wet Hot American Summer" to "Wanderlust") for creating his own little bubble for his characters to operate in. While his latest is set in New York City, absolutely nothing that happens in this milieu rings familiar. That's because what we see on screen is a world made up of romantic clichés drawn from movies. Come the resolution, it doesn't particularly matter that the film loses some steam in the final 20 minutes or that some of its interesting minor characters (played by Jason Mantzoukas, Cobie Smulders, Ed Helms, etc.) feel like cardboard cutouts. By that point Wain has won us over through pure, unadulterated (well, maybe a tad adulterated) merriment.

Come midnight I was finally seated for my final film of the festival: Jonathan Milott and Cary Murnion's "Cooties." The word around town suggested that this Midnight movie contained some sort of redeeming value: it doesn't. Perhaps it was the comedic high I was on after laughing throughout "They Came Together", but "Cooties" came off as a derivative, sporadically enjoyable trifle of a film. The scenario is amusing enough: when a bug that turns people into cannibalistic creatures infects hundreds of prepuberty elementary school students, madness ensues. 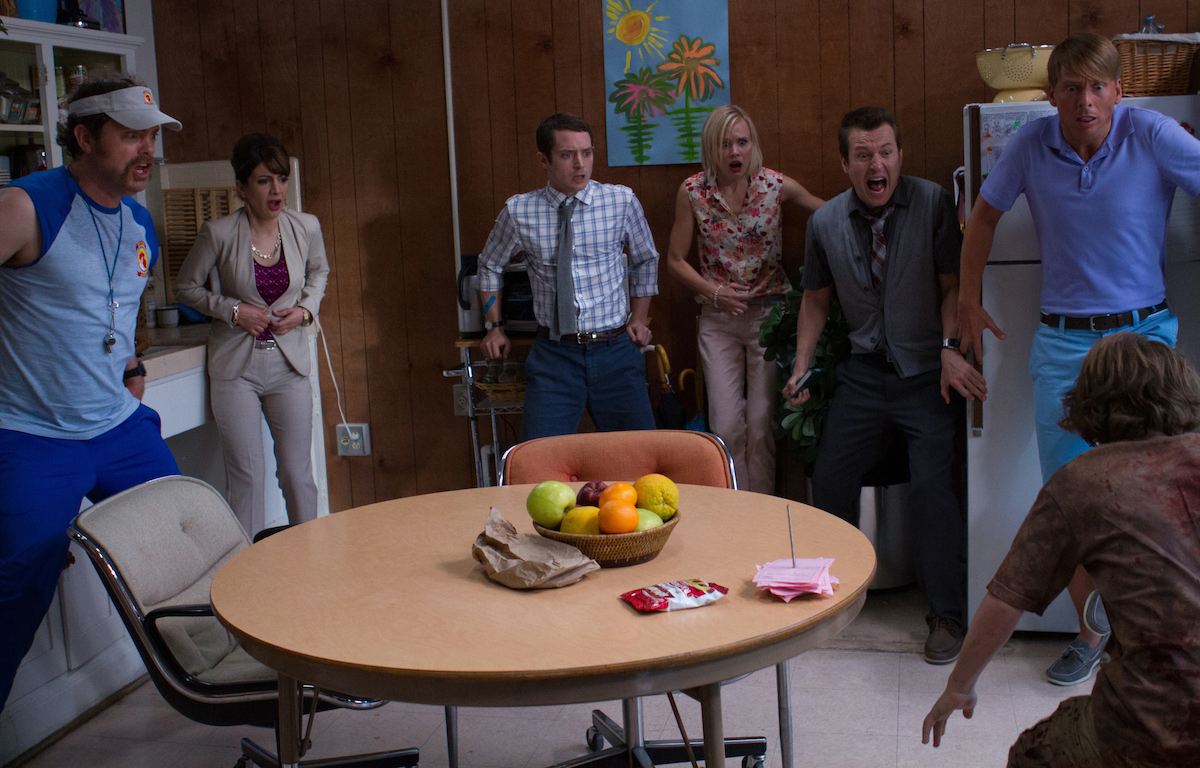 As blood-soaked and gory as most modern horror movies, "Cooties" has a jolly time creating situations where a teacher can gleefully pummel a student to death (and vice versa). I suppose the film taps into the long-claimed notion that just about every teacher—at some point in their careers in academia—wants to obliterate every student, and vice versa. After consuming "Cooties", I suspect most people will have a different outlook on the teaching profession (what with all the unrepentant killing).

Elijah Wood turns in the type of performance we're accustomed to after watching "Wilfred" as an unassuming and seemingly kind aspiring horror novelist who decides to sub on the worst day humanly conceivable. Maggie Pill adds some much-needed energy as a local teacher tired of living her life in a small city devoid of intrigue, hitched to a gym teacher played by a macho Rainn Wilson.

While terribly underutilized, the ancillary characters (from Jack McBrayer to Leigh Whannell to Morgan Lily) nicely round out the teaching staff. "Cooties" delivers in some of the more action-centered sequences, where audiences promptly applauded the myriad forms of death. Overall the film never quite finds its footing, either comically or tonally. Most importantly this unfunny and amorphous comedy lacks any sort of clear direction. A great premise wasted.

Up next: an interview with Alex Ross Perry and more.