From the World Cinema documentary competition comes two films of high note, “The Good Postman” and “Machines.” For Sundance attendees, I highly recommend making time for them; for those not at the fest, these are two films to keep in mind as they undoubtedly play more festivals. Both documentaries, however, should be seen on the big screen, especially as they challenge the duty of a documentary camera, with microcosm projects that speak to values that resonate throughout the world.

Simplicity means so much within the Bulgarian doc, “The Good Postman.” It is the story about a tiny village, called Great Dervent, and its very few residents. As some people say in candid moments, the village used to be much better—they once had a movie theater. The Bulgarian village is on the border of Turkey, which raises the issue of refugees from Syria, who sometimes populate the town.

It’s an issue that divides two men in the town, both running for mayor. One of them is a postman named Ivan, who knows everybody in the area, as they are on his route, but lives a mostly quiet, single existence. His time walking to different houses is like campaigning, where part of his platform is the acceptance of refugees, and the good that they can bring to the village. His opposition includes Halachev, who is less of a bon vivant despite his big presence, and wants to keep the refugees away from taking jobs that are in the village. He doesn’t want a job in the village, but he bemoans the fall of Communism. They are competing against the current mayor, a woman named Vesa who hilariously has no time for them.

The film is about their campaigns and the importance of the refugees issue, which makes for intriguing viewing. But director Tonislav Hristov’s filmmaking is what makes the entire package so compelling. More than any doc I’ve seen in recent years, this has a form that could immediately pass for narrative. For one, it doesn’t use title cards except for location, and talking head interviews are nowhere to be found. The coverage of these characters, like when they sit around in conversation, is calculated and without any zooms. Even the color saturation is kicked up a bit, to show the beauty of the grass or the sun in this albeit empty landscape. This aesthetic choice is matched with its tight narrative, which tells of two men (physically distinct, like good fictional characters would be), and the election they both want to win.

This choice, achieved by precise cinematography and editing, is a mix of experimental and observational. The effect is hypnotic. You watch certain scenes, and they are so perfect that they must be staged. A great example is when Halachev performs a campaign speech while standing on the village cafe patio, overlooking a completely empty field. Evidence of a camera (like one cameraman catching another within a shot) is nowhere to be found. You could show this movie to a friend, tell them that it’s a narrative movie, and your friend would believe you.

“The Good Postman” is the best kind of microcosm documentary, one that boasts an expansive worldview. It speaks a great deal to topics faced across the world; the parallels with America’s own debates about people considered “the other” are especially prominent. 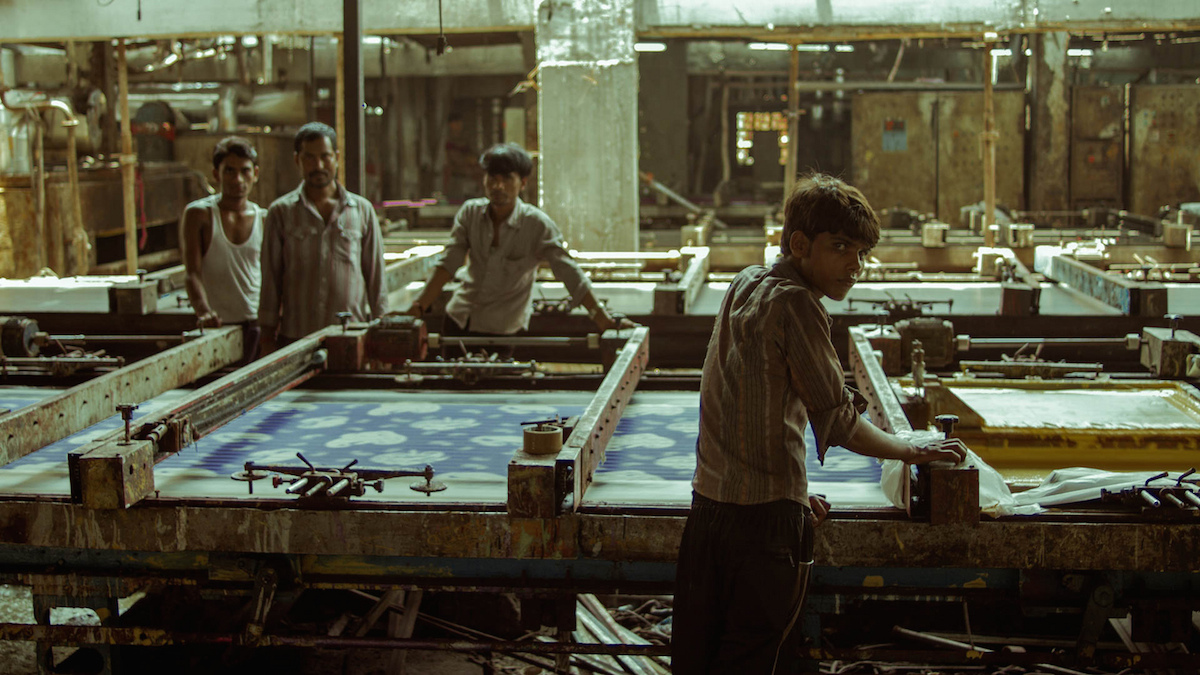 We do not know the workers in “Machines” by name, but there are many faces and pieces of equipment to remember in this riveting day-in-the-factory documentary from Indian filmmaker Rahul Jain. Often these men of various ages are shown doing something repetitive on machinery that looks extremely dangerous and doesn't favor the clumsy (a dehumanizing trait itself). The camera makes us look closely, and the sound design clues us into the constantly clicking, squeaking, and churning of these monstrous machines, which require an inane task from one or two people, for hours on end.

This is a movie that immerses the viewer while trying to adapt the tediousness of what it is presenting. You watch a man pull a fabric off a giant spinning wheel as it goes around and around, for a long time. Or a shot of different fabrics landing onto a cart below, lifelessly. One of the longest takes in “Machines” is that of a young man (a pre-teen, if that) cranking a machine so fabric goes from one part to another. He starts to nod off, and does, even though his gaze indicates that he knows he’s being filmed.

In sporadic moments of interview, the workers speak about how they work for 12 hours straight; one man even says that he works for that amount of time, goes home to eat, and then comes back for his second shift. Someone says that they don’t know who their boss is, or what they even look like. Meanwhile, the contractors are shown only briefly, but their idea of their employees is disturbing enough: The men are selfish, they don't actually care for their families, and they don't have the power to unionize. “Machines” quickly asserts itself as a tragedy of dehumanization, of workers who abuse the bodies they use for work, and the figureheads who feel no need to respect them.

The factory we are shown is used to making textiles of various gorgeous, intricate design. Textiles, along with the filmmaking by Rahul Jain, brings to mind a central question about the film’s technique: Is there a place for beauty in these factories? The documentary uses camerawork that often calls our attention to when things should captivate us, like its opening take that travels around the place steadily, offering enough time to observe and hear the people and industry that we will witness for the rest of the film. And the movie finds beautiful images, like a rush of red fabric falling in front of a man’s gaze toward us, looking and sounding like a waterfall.

But “Machines” quickly goes beyond a knee-jerk to digest its long takes of work and repetition as an existential text about work that requires the body. The film takes its place as a fervently and broad political statement, showing how dehumanizing things are in just this one factory among countless others in the world. But at the same time, if the piece weren't made with such heart, it has the synopsis of a PSA about worker abuse. This movie is more than politics, just as much as it is more than poetry.

A final moment confronts viewers with a group of men, outside of the factory. They compare the documentary crew to missionaries, who arrive but then leave. “Why don’t you do something about it? Get shifts reduced to eight hours.” As magnetic as it may be as a cinematic experience, that sentiment lingers—“Machines” is figuratively only halfway done. Great film has a history of bringing change and awareness beyond the landscapes its captures. I hope Jain’s documentary starts something while being presented in Park City, even if the venue appears to be a universe away.