Mysterious relationships in bits and pieces

By accident or by design, today's films premiering at Cannes, whether in competition, in the "A Certain Regard" section, or in special screenings out of competition, revolved around relationships, good, bad, or worse. Whether the bond is with a woman who has lost the will to live, an Orca whale (both seen in "Rust and Bone"), a cheating wife-beater ("Mystery"), a ghost ("Mekong Hotel"), or a male prostitute ("Paradise: Love"), things don't always turn out for the best.

French director Jacques Audiard has enjoyed a high profile since his "A Prophet" made a splash at Cannes in 2009, winning the Grand Jury Prize. It seemed like just another prison movie to me, but others loved it. The film went on to win an Oscar nomination for Best Foreign Film and a host of festival prizes. Audiard is back with "Rust and Bone," a star vehicle for Oscar-winning Marion Cotillard ("La Vie en Rose") and Belgian actor Matthias Schoenaerts, who came to new visibility by starring in this year's Oscar-nominated "Bullhead." 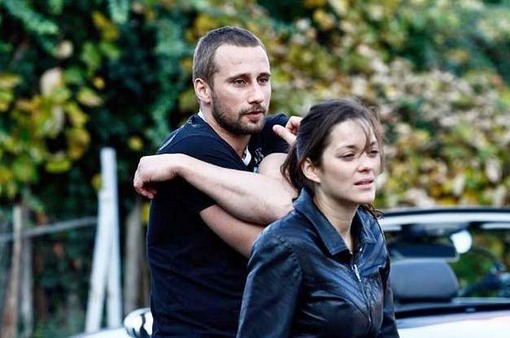 I was especially looking forward to "Rust and Bone" because Schoenarts had given such a powerful performance in "Bullhead," for which he had bulked up ala De Niro for his portrayal of a violent man whose life is defined by his steroid use. In "Rust and Bone" he's Ali, an unemployed guy who moves to the seaside town of Antibes (just down the road from Cannes, actually) to camp out in his married sister's garage after he's suddenly saddled with the custody of his five-year-old son. A former amateur boxer, he gets a job as a nightclub bouncer.

Cotillard plays Stephanie, a trainer of Orca whales at Marineland. She's the kind of smoking-hot confident woman who goes to a club alone only because she enjoys having men watch her dance. She meets Ali briefly on one of those nights when he helps her out of a jam. She disdains him but keeps his phone number. 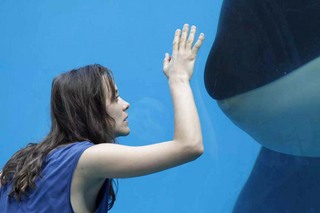 An accident at Marineland seriously injures Stepanie, and she wakes up in a hospital to discover that both her legs have been amputated at the knee. Here's where the plot turns into a perfunctory romance dressed up with unusual circumstances. Plausibility isn't a strong point in far more incidents than I can describe here. Depressed and reclusive as she fumbles a recovery in her new disability apartment, out of all the people in the world Stephanie calls Ali. Why? Who knows, except that it's in the script.

Ali immediately falls into a role as her friend and virtual care-giver, and later, her lover. Why? It's in the script. "Rust and Bone" clearly aims to be a showcase for its two prize performers, and each gets to run the gamut of showy emotions. Cotillard can preen and strut, cry, wail, crawl, and then proudly take charge of her life. Schoenaerts gets to brood, explode in head-banging anger, fight, make love, and yes, cry real tears when his son, who is conveniently unseen for much of the movie, is at death's door. 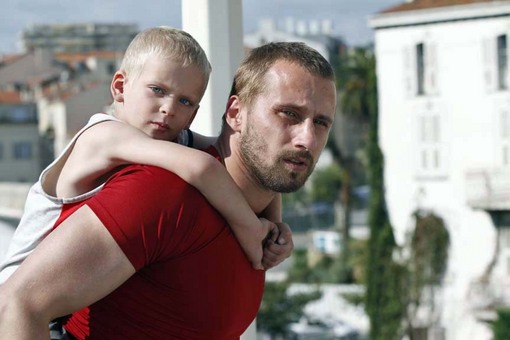 Cotillard and Schoenaerts are two of the best and most promising actors working in Europe today. I wanted to be blown away by their work in this film, but it all felt like a setup, a mere exercise. It's not a terrible film, just a forgettable one, and the script didn't demand enough of its stars that seemed true and from the heart.

Chinese director Lou Ye's "Mystery" opened the "A Certain Regard" section of the festival this morning. He's best known in the U. S. for "Purple Butterfly" and for "Summer Palace," which resulted in his being banned from making films for five years by the Chinese government. Like "Purple Butterfly," "Mystery" is based on a love triangle, but one with many more angles than are first apparent. 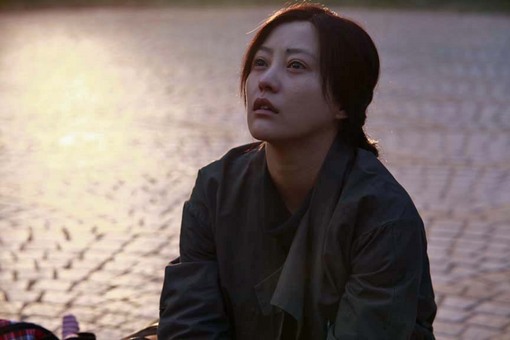 An ethereal rendition of "Ode to Joy," sung in Mandarin by a women's choir, is heard on the soundtrack over the opening sequence in which a horrendous expressway accident leaves a young woman dead on the pavement in a rainstorm. Since it turns out that she rolled down onto the highway from the fenced embankment high above, this was no ordinary accident. How she got there and why will gradually be revealed.

Middle-class stay-at-home wife and mother Lu Jie discovers that her husband Yongzhao has been regularly unfaithful to her with multiple women. Stalking him one day, she follows a college girl after she parts with him in front of a hotel. The girl is the one later inexplicably killed on the expressway, and the police interview Yongzhao as a suspect. Meanwhile, Sang Qi, the mother of one of her little daughter's playmates, befriends her on the playground and the two see each other regularly until Lu Jie realizes that this woman, too, is one of her husband's lovers. 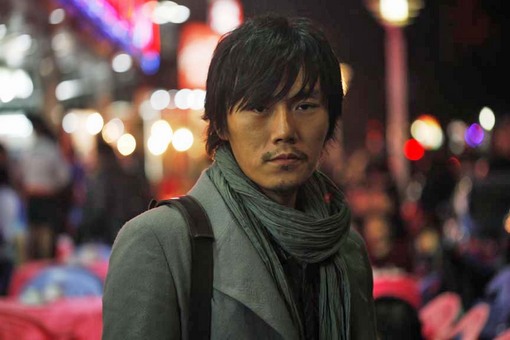 Lou Ye films the contemporary Chinese urban landscape as perpetually shrouded in fog or drenched in torrential rain. It's a place where the sun never shines. His interiors are seen at night or dimly lit. Key scenes are shot with a jumpy handheld camera and a preponderance of close-ups in order to convey instability. This is a shadow world where anything can happen, and anything does happen, as the story continues to open new and unexpected veins of perfidy and self-interest in his three central characters. In his striving for a bigger picture of moral breakdown Lou Ye leaves a lot of loose ends, and yet he succeeds in making the whole work function as a relatively satisfying mystery with an unpredictable ending twist. 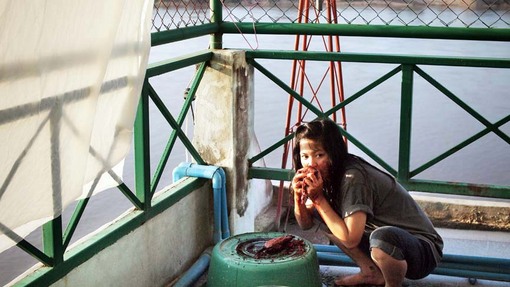 Any new film by Apichatpong Weerasethakul, or "Joe" as he was known back in his School of the Art Institute of Chicago days, the 2010 Palme d'Or winner for "Uncle Boonmee Who Can Recall His Past Lives" is highly anticipated here at Cannes. Featurette "Mekong Hotel," only 61 minutes long, premiered out of competition today. Weerasethkul once again explores the interface between the spirit world and the human world that has been a theme running through his earlier work, through a mother-daughter story in which the mother is a flesh-eating vampire and the daughter is a ghost who haunts her old boyfriend through several reincarnations.

That sounds much more horrific, haunting and exciting in print than it is on the screen. Weerasethkul's ghosts are matter-of-fact creations that look and act like humans. The imagery is thoroughly earthbound, and except for a couple of raw-flesh-chomping scenes (ghosts chew with their mouths open) the spiritual aspect of the proceedings is conveyed through the dialogue. Weerasethkul's imagery is always ravishing, and "Mekong Hotel" is largely set on veranda overlooking the wide river, giving the story a timeless quality. 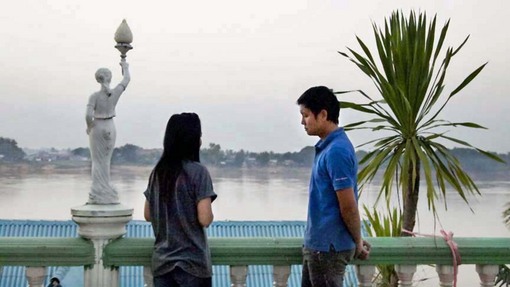 At the risk of drawing the ire of the most die-hard Weerasethkul fans, I should say that this film seems padded out from what might have been a short. "Mekong Hotel" was commissioned by the French TV channel ARTE France, and I'm guessing that a certain length was required. The composer of the soundtrack's guitar music gets hefty screen time, and the film returns to lengthy sequences of him playing at several junctures. Unlike other diversions and changes of pace in previous Weerasethkul films, this has the air of filler. Just asking, Joe.

The most challenging film of the day was my last one, "Paradise: Love" by Austrian director Ulrich Seidl, screening in competition. In films including ""Import Export," "Jesus, You Know," and "Dog Days," Seidl invites his viewers into a world of degradation, imperfection, and human failing, and then he grinds our faces in it. "Paradise" Love," the first in a planned trilogy, is set in a sex-tourism resort on the coast of Kenya, where European women, referred to as "Sugar Mamas," come for sex-centered holidays with the young African men they engage. 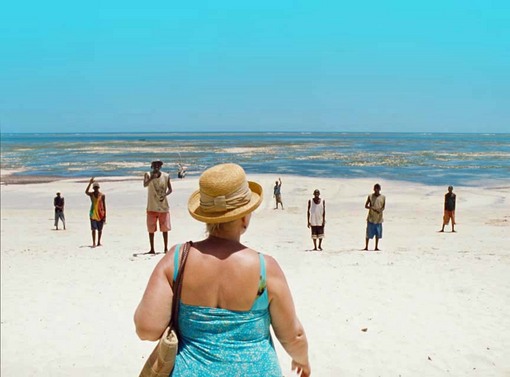 Teresa (actress Margarethe Tiesel in a daringly vulnerable performance), a woman of a certain size and a certain age, ventures into this milieu with some trepidation, but is soon initiated into the protocol and the nature of the pleasures by a fellow Austrian, also a woman of a certain size and a certain age. The two sit at the hotel bar in bikinis, their backs to the camera, their hefty bottoms the focus of the frame. They exchange sexual secrets, and giggle and shriek like school girls. They move on to teasing the black bartender, who can't understand them, declaring him "shiny as bacon fat." They teach him to say it in German. Altogether, they are oblivious of their casual racism, unequipped even to conceive of the concept of racism.

Seidl proceeds to depict a microcosm that revolves around mutual exploitation. Teresa defines sex as love and craves gentle caresses rather than rude gropes, convincing herself that Mungu, the gigolo she finally chooses, wants her for herself. She is shocked when he begins to milk her for cash, first for a "sister" (actually his wife) and her sick child, then for an impoverished school, and finally for his father's heart problems. Teresa's friend disposes of the problem more neatly by buying her "bedtime treat" a motor scooter. 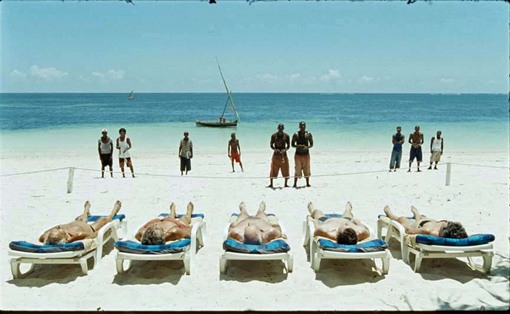 The thing about Seidl's films is that no one is ever wholly innocent, and no one ever gets to watch the scenes he portrays as an act of voyeurism. He aims to make it uncomfortable, and it is. "Paradise: Love," is rife with male and female nudity, but the story isn't structured for pleasure. The women are often ugly, not in their oversized stretch-marked bodies, but in the vileness of their greed as clueless users. The men, while beautiful to look at, have become appalling conmen in their slavery to a system that makes their manhood a commodity. 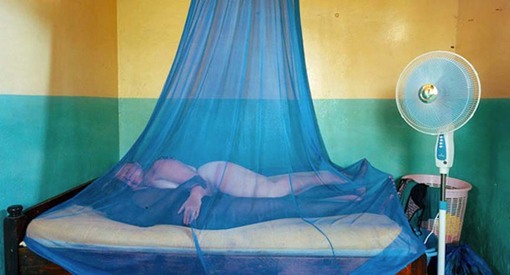 In a scene that sums up the film for me, Teresa lies naked and asleep under a filmy blue mosquito net on Mungu's bed in his tiny hole of an apartment. He sits nearby on his couch, also naked, smoking a joint and drinking, his face an unreadable mask as he watches her in the near-dark.

Leaving the "Paradise: Love" screening, Vogue magazine film critic John Powers and I fell into a discussion about the ultimate intention behind Seidl's work. It's deliberately provocative to the extreme, even offensive to many, but to me, nothing he depicts is gratuitous. The lower his characters fall, the more degraded they become, even when they are themselves are the perpetrators of cruel debasement, the more some essential kernel of humanity, some potentially sympathetic and graspable quality is revealed. We may not like it but I believe it's there.