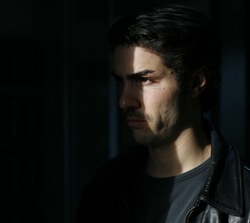 One of the trade papers on Thursday was touting the French film "A Prophet" by Jacques Audiard, which received excellent reviews early in the festival, as a hot contender for the Palme d'Or. Rumors of this sort seldom mean anything here, but to me this was one of those scratch-my-head moments. "A Prophet" is a well-crafted, well-acted prison movie, but I feel like of seen variations on this story and its predictable trajectory too many times in too many other movies.

Malik, a young, vulnerable Arab-French man arrives at prison to serve a six-year sentence and is immediately targeted by the ruthless Corsican gang that controls virtually everything in the establishment, including who lives and who dies. Forced under threat of death to do the gang's dirty work, including a murder, he waits and learns to better his oppressors at their own game.

As good and mainstream as this film is, there were few variations on the expected details: the body searches and humiliations of prisoners; the cruel intimidation of the weak by the strong; and Malikís inevitable rise to power as a force within the prison and as a drug lord on the outside. I guess I always hope that films in competition will be extraordinary in some way, and "A Prophet" just didn't seem to have that quality.

In the same way, I looked for something special enough for the Palme in "In the Beginning" by Xavier Giannoli, another French film in competition. Said to be based on a real incident, it's a rip-roaring good story to be sure, in which a recently paroled small-time conman becomes the victim of his own daring when he passes himself off as the representative of a major construction company in an economically depressed town where hundreds of jobs had been lost after that same company canceled a highway project two years before.

Using the name Philippe Miller, our man attracts unwelcome notoriety when the town leaders begin showering him with bribes under the impression that he has the power to restart the highway project. Withdrawn and socially awkward, Philippe seldom makes a plan or decision, but functions as the catalyst in a project that takes on a life of its own. Given the choice between hightailing it out of there while he still can or playing this con to the end, he stays and somehow builds a highway on credit.

There are lots of big construction scenes and plenty of subplots, including one involving the town's available lady mayor, played by Emmanuelle Devos, and one with Gerard Depardieu as a dangerous friend from the past. The best aspect of "In the Beginning" is watching craggy actor Francois Cluzet interact with those who use him as the blank on which to project their own dreams and ambitions. 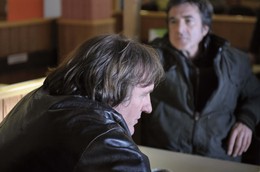 Gerard Depardieu and Francois Cluzet in "A l'origine": A thief, a con man, and his pal

I'm an admirer of Palestinian director Elia Suleiman's "Divine Intervention", which premiered in Cannes in 2002, so I was especially looking forward to "The Time That Remains," his new film in competition. It's a semi-fictional story in four segments loosely based on the history of the director's family, Palestinian residents of Nazareth, from 1948 to the present. "The Time That Remains" is kind of a comedy. I say "kind of" because Suleiman's film is so thoroughly based on irony and humor of the darkest sort that you can only find it funny while acknowledging that his subject matter is deeply horrifying. For example, he builds a laugh into an execution scene in which the Israeli soldier tying a blindfold on the man to be killed is so much shorter than his Palestinian prisoner that he needs to interrupt his task and search for something to stand on. Suleiman often films a sequence like this from a distance so it takes on the air of pantomime or of silent movie comedy.

In the first half of the film, Suleiman's father is played by Saleh Bakri, the exceedingly handsome young actor from "The Band's Visit." Bakri is a good actor but he hasn't mastered the knack of conveying everything while doing nothing that is the Suleiman trademark style. A few streaks of gray in his hair don't cover for the youthful body language and hunky physique that give him away once the father is supposed to have grown old and sick. If "The Time That Remains" has a central flaw it's that Suleiman isn't in it enough. The film comes alive in the second half, set in a contemporary time frame, when the director is able to play himself. He's an accomplished comic stylist in the deadpan manner of Buster Keaton, and interprets his own material as no one else can.

Everyone here at the festival, whether a film programmer, a critic, film distributor, or sales agent, has a different agenda and a different frantic schedule. One of the important things about being in Cannes is having access to colleagues from around the world to trade ideas and information, but for me as for many others, a lot of these meetings are spontaneous and casual. I may be sitting next to a cinematheque director in a screening, or next to a film critic for a Barcelona radio station in a cafe, and we strike up a conversation. 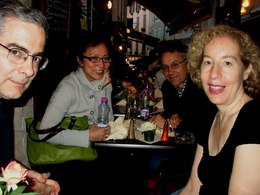 One day I'll walk through the market and stop in for a visit at the booth of Katayoon Shahabi of Sheherazad Media International, the only independent film distribution company owned and operated by a woman in Iran. Some night I'll happen upon Nancy Gerstman of Zeitgeist Films and her husband Gary Palmucci of Kino International in a restaurant. We watch Turkish director and jury member Nuri Bilge Ceylan, whose film "Three Monkeys" Zeitgeist distributes, walk by as we talk industry gossip. Cannes is a 24-hour gig, and there is no one who isn't on duty at all times.

This year's festival ends with the Palme d'Or Sunday night, and so in fun I'd like to propose a new additional award in a long-overlooked area. I'm a cat lover, and so I can't help but take note of the presence of cats in the films I see. It's about time Cannes gave an award for Best Cat. You won't see it happening onstage at the Palais Sunday night, so as a wildcat gesture so to speak, I'm initiating the unofficial Whisker d'Or.

• A dark-orange cat as a look-or-you'll-miss-it extra in Hiro-kazu Kore-Eda's "Air Doll."

• Voice work only: the cat that meows once in Bong Joon-ho's "Mother"

• The envelope, please! The first-ever Whisker d'Or goes to Topper, the black-and-white tom from "Bright Star." He gives an all-around fine performance in numerous scenes opposite human co-stars. His tour de force scene comes when he nuzzles the corner of a book with his whiskery cheeks. Director Jane Campion reports that this may have been Topper's final role, as he's 17 years old.

There is quite unfairly no photo online of Topper, so I'll compensate with a still photo from "Bright Star," showing a field of flowers in which any cat would delight to pounce and gambol.

The French trailer for "A l'origine"