Presenting two sold-out showings at Fantasia Fest 2016—“Terra Formars” and “As the Gods Will”—Takashi Miike had the air of a Japanese rock star as he joined the stage with sunglasses and a stylish wrinkled shorts-suit combo worn with a t-shirt. Soft-spoken and darkly funny, he seems to revel in the attention of the adoring crowd, who he jokes with and flatters in equal measure by way of a translator. No other filmmaker better encompasses the madness and diversity of Fantasia’s programming as Miike, and this year, it feels like the prodigal son has returned.

Miike’s first introduction to North America was through Fantasia. In 1997, his film “Fudoh: The New Generation” (1996) screened at the festival’s second year, the first time a Miike film had ever played in Canada or the USA. In Fantasia’s 20-year history, they have now screened 30 of his films representing just under one-third of his directorial output. This year, in celebration of his career, he has been honored with the Fantasia Lifetime Achievement Award in tribute to his contribution to genre cinema. Presenting two films with extensive Q&As, Miike also sat down with RogerEbert.com for an interview. 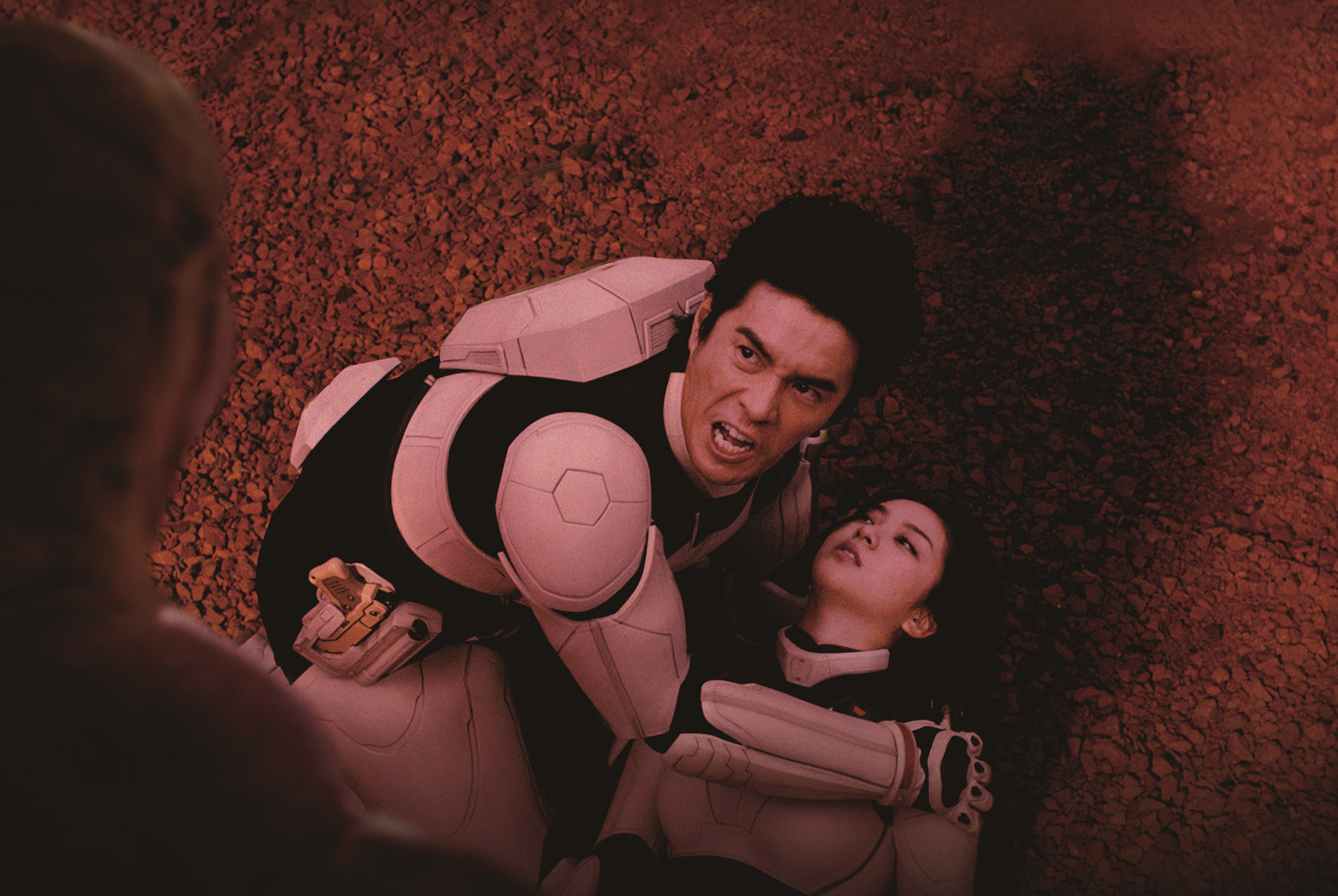 Based on a manga, “Terra Formars” is an eccentric vision of the future where the earth has become overpopulated and a group of criminals is sent to eliminate giant cockroaches that have invaded Mars so the red planet can be colonized. In rapturous color, the film portrays the fate of humanity as lying in the hands of disenfranchised outsiders, who are motivated by a need to survive rather than the noble cause of saving the human race. Part comic book movie, part science fiction and part dark comedy, “Terra Formars” blurs the line between man and bug, as the only weapon this group of criminals has against super-powerful giant cockroaches are medical injections that will mix their DNA with different species of insects, so they can “fight bugs with bugs.”

Somewhat inconsistent tonally, there remains a lot of beauty in “Terra Formars.” This is Miike’s vision of the future, loaded with dark predictions about the fate of humanity. Early scenes, especially those set in a futuristic Tokyo, paint a portrait of the earth as dark, crowded and dirty. With allusions to “Blade Runner”—Miike’s own touch on the moving Geisha billboard involves a ball-gag in his model’s mouth—the film explores the nature of humanity itself. For Miike, “Blade Runner” is shockingly real, representing “a future that we cannot avoid.” Not making any efforts to hide his influences, Miike is happy people recognize his allusions, “The thing I want honestly is to show is the respect I have for other films. Some people might want to hide the 'Blade Runner' aspects, and a lot of people want to make something that is totally their original work, but I don’t have any desire to do that. I think it’s more important for me to put in the film something that could feel real.” 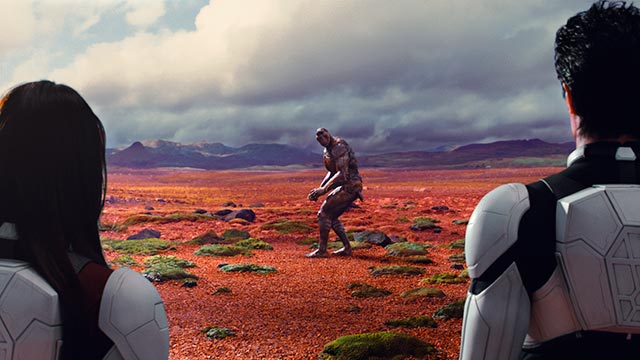 The heart of “Terra Formars” very much hinged on the blurring line between man and technology, suggesting the darker potential of advancing science used towards the selfish motives. The film itself feels plugged into electricity, the colors running on the screen a series of incandescent blues and glowing oranges. In comparison to the dour visions of the future present in contemporary American science fiction, Miike’s vision seems improbably bright, echoing the colorful natural world for inspiration. Humanity’s fate resting on our ability to adapt by way of evolution literally becomes the source of light and color within the film.

Whether rooted in the past, present or future, Miike’s vision seems unconcerned with the struggles of the hero as his monsters and villains are fully realized with deep passions, desires and fears. For Miike, this darker side is closer to all of us, something he relates to deeply. “I am attracted to bad people because they are very human,” he says. “The hero has to be an archetype; they have to be like a dream; they have to be perfect. The evil is closer to us.” Some of the most touching scenes of the film come by way of the monstrous evolved cockroaches, who are imbued with limited but noticeable humanity—such as a brief moment when one of the monsters holds up its hands begging for its life, just wanting to survive another day.

The minuscule value of humanity in the face of greater forces, such as nature, fate, and the Gods, comes to an even bigger head in “As the Gods Will”—another film based on a manga. Much lighter, though shockingly more violent than “Terra Formars,” the movie begins in a Japanese classroom already spattered with blood. A few headless bodies and hundreds of red marbles are on the bloodstained floor, the remaining high school students soaked in sweat, holding as still as possible, as a giant daruma doll sitting in front of the classroom recites a poem. Every time the poem is complete, he spins around, exploding the head of any student who dares to move in his presence. Thus begins a bizarre invasion by the Gods, where high school students across the world are forced to compete in a senseless game in order to join the ranks of “God's Children.” 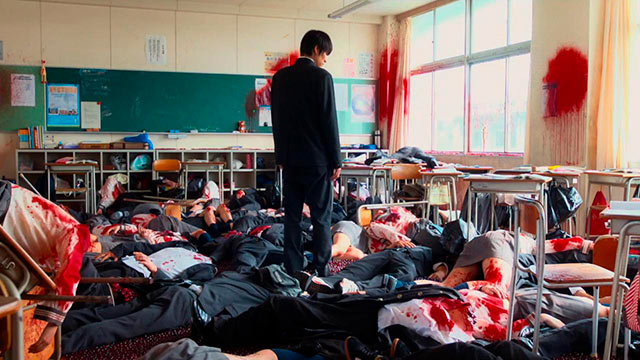 “As the Gods Will” was done in part in reverence of director Kinji Fukasaku, director of “Battle Royale.” Through his cinema, Miike wants to pay tribute to his own masters, saying “I don’t want to surpass them, but be a part of their history.” The film’s absurdity and comic violence is rooted in the same absurdist violence as “Battle Royale,” and locked into the same insecurities regarding youth. A wide range of different monsters inspired by Japanese toys and icons brings together CGI and stop motion technology to breathe shifting tonalities to each different chapter. The film is about the chaos of destiny—something that runs through much of Miike’s work—as the industriousness of his characters does not always guarantee they will survive. Evoking recent tragedies in Japan, Miike theorizes on the unpredictability of life, “In Japan, there was the big earthquake and the problem with the Nuclear power plant in Fukushima,“ he said. “Something that was very normal yesterday could change, and some things don't go as well as we imagine.”

“My films are like drinking a good beer, but pleasure doesn’t mean that it cannot change someone’s point of view,” Miike says. “Pleasure can also be a mirror of the anxiety we feel in everyday life, it can have a message inside.” As a cult festival, Fantasia employs a different dialogue with both filmmaker and audience than a more traditional film festival like TIFF or Cannes. It not only caters an intimacy by blurring the line between fan, filmmakers and curator—it shelters an environment of shared pleasure by way of transgression. Miike, who shares his audience’s passion for cinema, embodies the cult ideal by way of comedy, art and community through his filmmaking but also his passion for his audience. “Even in Japan people don’t understand my films,” he said. “It doesn’t matter as long as my films are appreciated at Fantasia.”