Among the many advantages afforded to attendees of the Chicago International Film Festival is a chance to see a number of films from foreign countries that are currently in the running for next year's Oscar for Best Foreign Language Film. This year's program includes 15 films that have been named the official selection for their respective countries, including such eagerly-anticipated titles as Belgium's "Two Days, One Night," Sweden's "Force Majeure" and Turkey's "Winter Sleep." Two of the other potential nominees from this year's crop, Germany's "Beloved Sisters" and Israel's "Gett: The Trial of Viviane Amsalem," also have a Chicago connection in that both have been picked up for U.S. distribution by locally-based distributor Music Box Films.

Directed by Dominik Graf, and set in Western Europe during the end of the 18th and beginning of the 19th centuries, "Beloved Sisters" is a jumbo-sized historical drama/romance focusing on the intriguing relationship between writer/philosopher Friedrich Schiller (Florian Stotter) and the two Lengefeld sisters—one, Charlotte (Henriette Confurius), who would become his wife, and the other, Caroline (Hannah Herzsprung), who would become his biographer. Although little tangible proof of the true nature of what transpired between the three has survived in the ensuing years, the film goes along with the theory that the three were involved in a ménage a trois in which Charlotte was Friedrich's official wife and Caroline his lover (with Charlotte's full consent), an agreement that brought happiness to all concerned at first but which would eventually strain the seemingly unshakable bond between the two sisters.

"Gett: The Trial of Viviane Amsalem" is the third film in a trilogy by filmmaking siblings Ronit and Shlomi Elkabetz, following "To Take a Wife," which chronicled the bitter end of the 20-year marriage between Viviane (Ronit Elkabetz) and her husband Elisha (Simon Abkarian), and "Seven Days," which followed their separation. Here, Viviane is seeking a divorce from Elisha, but Elisha, in what appears to be yet another passive-aggressive attempt to control her life, refuses to grant it to her. This is a problem because in Israel, marriage and divorce are handled through religious courts that are tilted almost entirely in favor of men; women have virtually no recourse in regards to a contested divorce. Over the next five years, depicted in minute and unsparing detail, Viviane and her lawyer repeatedly return to court to fight for her right to divorce against a husband who oftentimes simply refuses to come to court (necessitating more delays), and a trio of judges who are locked into a ruling system in which women have no real rights to speak of; they repeatedly suggest that she return to Elisha to work things out. 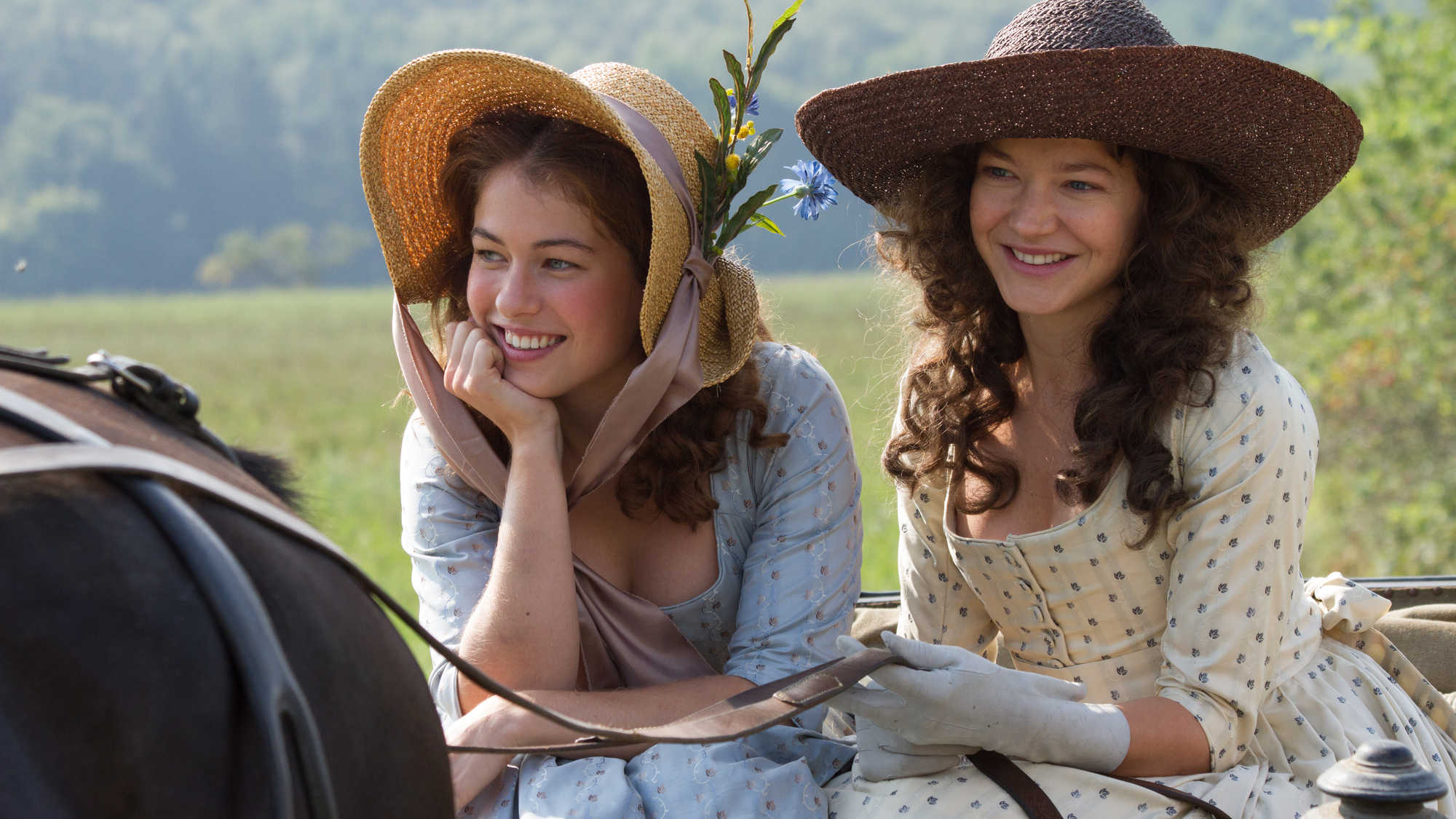 Of the two films, "Beloved Sisters" is the more conventional entertainment and with its lavish mounting (which will no doubt remind many viewers of "Barry Lyndon," which takes place during roughly the same time period) and 170-minute-long running time, it has the kind of epic look and feel that may resonate with Academy voters. The flaw with the film is that for a story about a romantic triangle to have any chance at success, all three legs of the triangle have to be interesting and compelling. Here, the relationship between the two sisters—with Charlotte feeling indebted to Caroline for having married solely for financial reasons to help rescue their family fortunes—is undeniably interesting and the performances from Herzsprung and Confurius are both quite good, with the latter especially striking in what appears to be the less showy of the two parts until she comes blazingly alive in the later reels. Alas, as the shared object of their affections, Stetter is simply kind of bland and forgettable—after watching Charlotte and Caroline consumed with their shared love and desire for this guy, most viewers will find themselves thinking "Him?"

As for "Gett," it is a much pricklier cinematic experience at times but it is an altogether more rewarding one in the end. Even though I must admit to being absolutely nowhere near the target audience for the film—having never been Jewish, married, or divorced, nor even realizing that it was the third film in a trilogy until after seeing it—I nevertheless found myself pretty much mesmerized by every frame of it. This is an angry film but it is one that doesn't overplay its hand by underlining every single point that it has to make in an overly melodramatic fashion. Instead, by letting its tale unfold in its grindingly slow fashion, it allows viewers to share in Viviane's growing anger towards a system that hardly seems to notice that she exists, and when her frustration does boil over into such acts as wearing a red dress to court or letting her hair down during the proceedings—innocent acts to most people but anathema in the eyes of those bearing judgment on her—the effect is quietly stunning, largely due to Ronit Elkabetz's incredible performance, a turn that deserves serious consideration for the festival's Best Actress prize.

Admittedly, the rigid formal style of the film—the harsh and unsparing gaze of the camera and the decision to set the entire thing within the courtroom walls--and the increasingly maddening behavior by Elisha may wind up driving some viewers to want to tear their hair out in frustration. Of course, as the Elkabetzs might point out, that is exactly the point, and exactly the kind of thing that too many Israeli women have to face in real life for no other reason than the circumstances of their gender.

"Gett: The Trial of Viviane Amsalem" screens at 8:15 PM on October 13 and 8:00 PM on October 14 with co-director Shlomi Elkabetz scheduled to attend.