Cannes: "The Kindergarten Teacher," "Beautiful Youth," and "It Follows"

CANNES, FRANCE—"Life Itself" had its Cannes premiere today, and unfortunately, it seems that part of the headline is that the film was disrupted by a projection mishap midway through. I saw the movie during its Sundance live cast but popped in today for Chaz Ebert and director Steve James's introductions. Chaz reminded the audience that Ebert "came to Cannes for almost 40 years, even when he was very sick." The movie's Chicago-based production company, Kartemquin Films, has compiled a tweet-by-tweet recap of the technical snafu. The version that showed today includes four new minutes of Cannes-specific footage.

The life cycle is very much on the mind of other Cannes filmmakers, who have delivered state-of-the-nation addresses that focus on the uncertainty of the future for the young. A highlight at Critics' Week tonight was "The Kindergarten Teacher," the second feature from Israeli director Nadav Lapid, whose "Policeman" (2011) mined national allegory from the figure of a macho cop. "The Kindergarten Teacher" can also be understood as a film about Israel, but it's a slipperier piece of work. A teacher, Nira (Sarit Larry), becomes convinced that her that her five-year-old student Yoav (Avi Shnaidman) is a kind of modern Mozart: He composes poems conceptually far beyond his age. (He conjures lines like "the moment of a parting is a moment of death.") Nira writes his poetry down and tries to persuade his family to publish it. She takes Yoav to a reading and presses him to join a world that vastly exceeds his understanding.

There are several ways to view the film. One is that Yoav is a modern prophet (early on, the class sings a Hanukkah song about how the Jewish people have had a savior for each age), and that the natural reaction to a prophet in modern times would not be disbelief but exploitation. But Lapid, who wrote the screenplay, also offers an impassioned defense of creativity. When Yoav's father appears, roughly at the movie's halfway point, he says he has no interest in nurturing his son's talent for poetry, citing the boy's literary-minded uncle's dead-end job as a journalist. The world is becoming more regimented, more anonymous. Nira's kids have gone off—or are about to go off—for mandatory military duty; at this point, even sex for her is mechanized. In an increasingly cog-like world, the only idea more alarming than a modern prophet is the notion that a modern genius might go unrecognized. As Nira takes her protection of Yoav to extremes, "The Kindergarten Teacher" finds room for optimism in an unsettling premise. 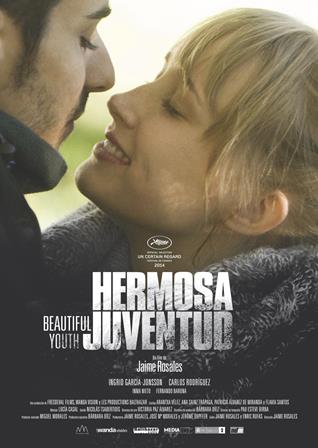 To the extent that Spanish filmmaker Jaime Rosales is known to American cinephiles at all, it's likely for "Bullet in the Head," an unseen-by-me 2008 festival favorite in which, reputedly, characters are shown talking, but there is no audible dialogue until the end. Rosales's "Beautiful Youth," shown in Un Certain Regard, doesn't have a gimmick on the same scale, but it does include long interludes in which all we see on screen is text messaging, and it  is concerned with how relationships are mitigated through Skype and Facebook. The central paradox, hardly new, is that as the world has grown more interconnected, it's become easier for people to grow apart. The test cases here are a Spanish couple (Ingrid Garcia-Johnsson and Carlos Rodriguez) who find themselves strapped for cash when she becomes pregnant. They contemplate a move to Germany, where there are more jobs, but—given the couples' lack of understanding of the language—not necessarily better ones. "Beautiful Youth" potently indicts the current economic disparities in the EU, though the subject cries out for a more nuanced exploration. The film's punch line feels willfully cynical.

Technology goes mostly absent from director David Robert Mitchell's "It Follows," one of the festival's biggest critical hits. Like Jim Mickle's sturdy Texas thriller "Cold in July," showing in Directors' Fortnight and opening in the states May 23, it's an homage to early John Carpenter. College-age Jay (Maika Monroe) learns that she's contracted a curse through sex; the only way to get rid of it is to have sex again. While the premise proves frustratingly malleable (the film is both pro- and anti-intimacy) and raises several gaps in logic (does using protection help? If you know you can't shoot a ghost, why would you try to electrocute it?), Mitchell strikes an impressive balance between the loose-limbed conversational scenes of his low-key "The Myth of the American Sleepover" and the more conventional scare tactics that the genre demands. An artfully underlit pool scene appears to be an homage to "Cat People" by Jacques Tourneur (another influence a programmer cited before the screening). Crumbling Detroit-area locations add to the eerie vibe.