Every entrance to the Cannes festival Palais or one of the main theaters requires a thorough bag search by a guard.  How thorough will depend very much on the individual guard. In the early morning, before the 8:30 am press screening in the Grand Theatre Lumiere, it’s usual to see a little pile of confiscated water bottles, apples, and half-eaten croissants on the table where the search is conducted.

This morning, I got the notorious female guard who checks every zipper and crevice. As she was making me unzip my wallet to show her that there was nothing in there but paper money, I finally asked what exactly they are looking for. Her English being as limited as my French, she made a gesture of sweeping her finger against her eyelashes.  Mascara, I asked incredulously? You’re looking for mascara? At that point she waved me on, so I guess I’ll never know.

Another of today’s festival mysteries is what Spanish director Pedro Almodóvar (Oscar-winning “Talk to Her,” “All About My Mother”) is up to with his competition entry “Julieta,” a talky, sluggish drama based loosely on three Alice Munro stories, “Chance,” “Soon” and “Silence.” Almodóvar’s combined story covers more than thirty years in the life of widowed Julieta (Emma Suárez), a still-vibrant blonde on the brink of moving to Portugal with her new lover when she runs into Bea (Michelle Jenner), an old friend of her adult daughter Ava, from whom she has been estranged for a dozen years.

Overcome by a fit of regret and longing with the realization that Bea has been in touch with Ava, Julieta puts her future on hold and begins writing a long account of her marriage and the history of her relationship with her missing daughter in the form of a letter. The film moves into two major flashback sections partly narrated by Julieta. In the first, a much younger Julieta (played from the ages 25-40 by Adriana Ugarte) meets her future husband on a train in an incident that ominously involves a brush with death. She subsequently embarks on marriage, and has a child.

In the second flashback narrative, Julieta’s husband dies in an accident, leaving her burdened by a terrible guilt over the circumstances, while young pre-teen Ava (Inma Cuesta), seemingly bounces back from the tragedy. At the age of 18, Ava takes a break from her possessive mother, signing up for a weeks-long summer retreat in Switzerland. She never returns, leaving word that she does not wish to see her mother again.

According to Almodóvar, “‘Julieta’ marks my return to the female universe.” On the surface, he once again delves into an examination of the mother-daughter relationship. It’s a return in terms of a narrative intended to reveal the subtly changing connections of women with each other over what is virtually a lifetime. Unfortunately, he doesn’t succeed in evoking the deep emotional and spiritual connections surrounding family that make his films so moving, including “All About My Mother,” which won Best Director at Cannes in 2003.

The pieces of “Julieta” are still lying flat on Munro’s pages. Great portions of the film consist of character interactions that are more or less inert talking-head conversations against a background of domestic interiors. The film’s musical score is so pervasive in its tasteful sawing, droning vaguely orchestral sounds that it becomes an active annoyance.

In the strangest turn of all, the juicy colorful richness that normally distinguishes Almodóvar’s style comes to the foreground only in scenes involving food. The making of an omelet broadcasts the film’s rare burst of sensuality. Each beautifully decorated birthday cake that Julieta sets out for the missing Ava’s 19th, 20th, and 21st birthday, and then tumbles uneaten into the trash, screams a mother’s pain in its luscious squashed state better than any of the film’s long conversations about loss. 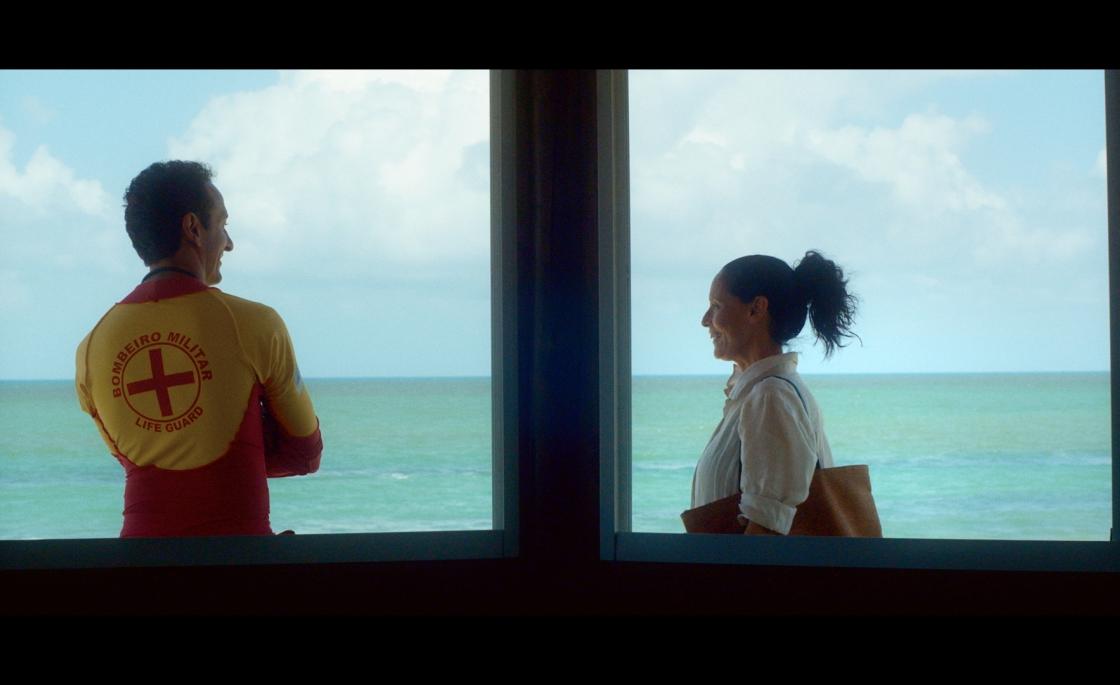 Brazilian director Kleber Mendonça Filho (“Neighboring Sounds”) makes an unexpected career move with his competition entry “Aquarius,” a film that seems entirely designed around the maturely sexy Brazilian star Sonia Braga. “Neighboring Sounds” featured an ensemble cast and centered on a culture clash between the working class residents of a crumbling housing development and their more affluent neighbors. “Aquarius” is set in an older but middle class beachfront apartment building, where feisty sixty-something Clara (Braga) is the last holdout against the sale of her home to developers.

The film’s political and class angles, involving hints of corruption in high places, are passed over in favor of a shameless showcasing of Braga’s every mood, talent, and hairstyle to the point that the entire story comes off as a setup for this purpose. Affluent widowed Clara, a breast cancer survivor and retired music critic, once raised her family in the simple but chic apartment. She lives alone, and her trusted maid Ladjane (Zoraide Coleto) does the cooking and cleaning while Clara spends her days at the beach, going out dancing with friends, or listening to music.

The building is named Aquarius, and an ambitious young developer plans to tear it down and replace it with the high-rise New Aquarius. Being of the Age of Aquarius vintage, Clara meets the construction company’s series of dirty tricks designed to make her give in to their sales offer with counter-strategies, like blasting a squatters’ party with her own earsplitting music to counter the pounding beat rocking her place from the empty apartment overhead.

The class issue in “Aquarius” is ambiguous. Clara appears to have underclass sympathies, yet she lives a very privileged life. She gamely attends her loyal maid’s birthday party, but appears to diss the woman when she barges into a gathering of Clara’s adult children to show them a photo of her dead son. She haughtily dismisses as an excuse, the developer’s argument that her resistance to selling is preventing the employment of scores of construction workers.

“Aquarius” is best enjoyed as a music-laced star vehicle. In the Cannes competition, it won’t likely be going anywhere. 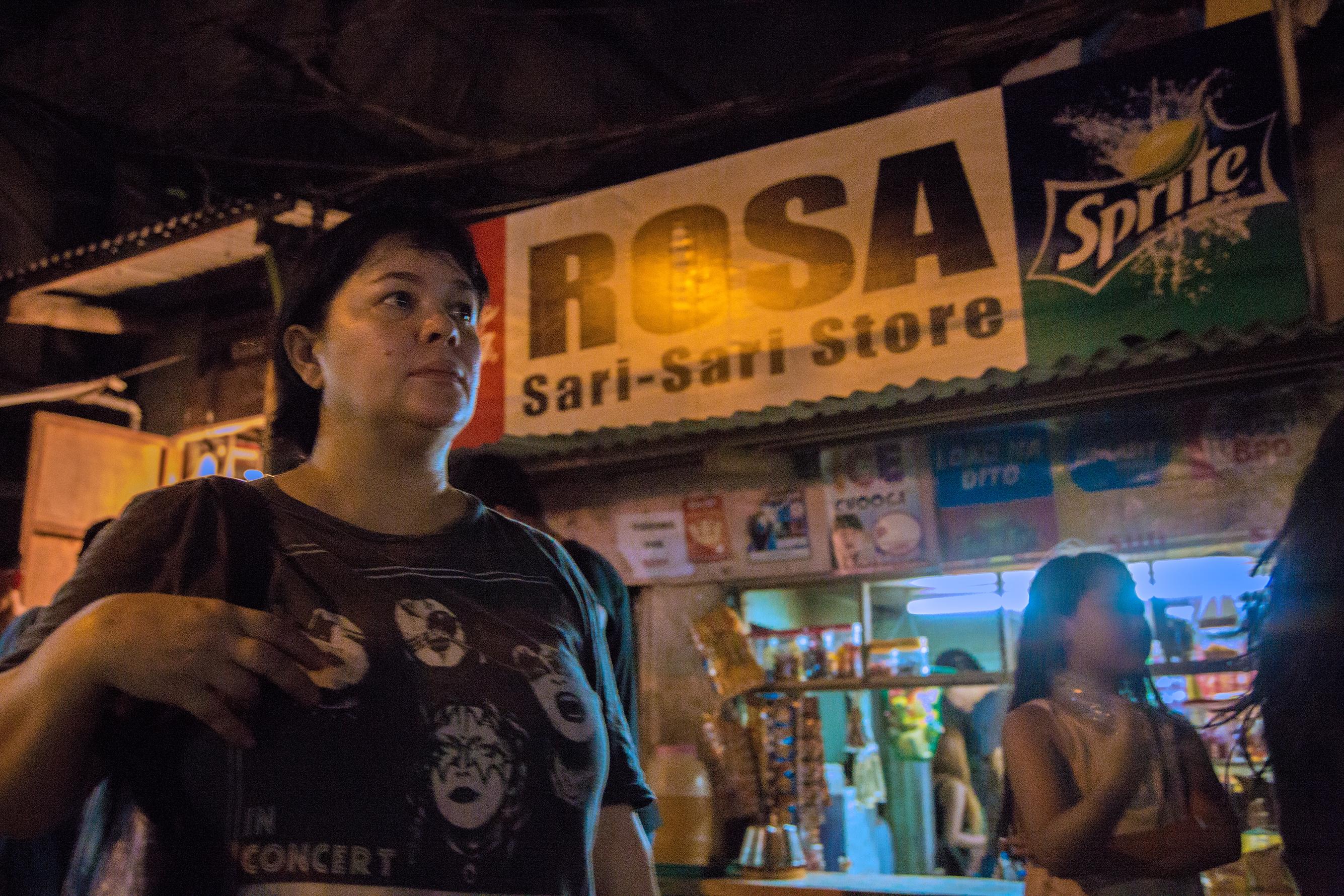 “Ma’ Rosa,” the competition entry by Filipino director Brillante Mendoza (“Thy Womb,” “Kinatay”), is less a look at the life of the wife and mother of the title than a portrait of a society in which corruption and poverty-driven betrayal run up and down the social scale. It’s shot largely at night in a cinema verité style and in muted color, and punctuated by a sparing score of electronic effects and percussion.

Ma’ Rosa (Jaclyn Jose) and her husband Nestor (Julio Diaz) run a tiny, makeshift neighborhood convenience store on the ground floor of their home off a narrow alley. The store is such a homemade operation that Rosa buys her stock at a regular supermarket and hauls it home in a taxi with the help of one of her four kids. She also deals small amounts of  “ice” on the side. One night the police make a drug raid on the store and take the couple in, where they are shaken down and threatened.

The film becomes a process more than a story, with the chain of bribery and barter extending from the police station to the neighborhood, and to the family itself, with violence, promises, and lies becoming the currency that assures day-to-day subsistence. Rosa is forced to turn in her drug supplier, a young addict who is beaten and kicked unconscious when the money the cops confiscate from him is not sufficient to cover the bribe they demand. They jubilantly use some of the cash to order out two roast chickens and a case of beer for themselves. Of the drugs, one of them says, “We’ll try some of that later.”

The police demand that Rosa and Nestor make up the difference in the payoff, even though she had been promised their release in return for ratting out her source. The amount needed is the equivalent of about $1000. The four kids spread out into the streets looking for the cash. The eldest son attempts to peddle the family TV, and the younger resorts to prostitution. The girls throw themselves on the mercy of relatives, who have little themselves.

Mendoza is one of a generation of Filipino directors working in the socially conscious tradition of the great Filipino filmmaker Lino Brocka (1939-1991). “Ma’ Rosa” is a relentlessly pessimistic film, and yet it is one in which grim beauty is paradoxically evident in the tropical downpours in the night market, in the teeming chaos of the streets, and in the sweating faces of people who will give, take, or be taken in order to survive.