Navigating the Cannes festival can be like playing a challenging game with ever-changing rules. This year, the security guards have constructed a maze of barriers and stanchions on the sidewalk in front of the Festival Palais, just to make entry slower and trickier. One day, both levels of pink passes enter a screening in a specified area; the next time, it’s only the pink passes with the yellow dot, sending regular pinks fuming. Nothing is in a straight line. “Any explosives?” the smirking young guard who checked my bag cracked in French on opening day. Perverse, no?

When it comes to perverse, there’s today’s first competition screening, “The Lobster” by Yorgos Lanthimos. This young director is at the forefront of a new wave in Greek cinema, and his transgressive and heavily absurd satires “Dogtooth” and “Alps” have gained him an ever-growing cult following. This is not facile work, and his films are also marked by sadism and cruelty. His comedy, such as it is, makes a laugh catch in your throat because the punch line is usually horrifying.

Before the festival began, “The Lobster” was the film I most often heard buzzed about by fellow critics. Along with Hou Hsiao-hsien’s “The Assassin,” yet to premiere, it’s been one of the competition’s most highly anticipated films.  It’s a little early to hear speculation on what the jury thinks (not that any of us really knows), but I wonder if “The Lobster” will resonate with the Coen brothers, those auteurs of “Barton Fink.” With its deadpan performances, plentiful absurdity, and darkest humor, this film could have what it takes.

“The Lobster” is Lanthimos’ first film in English, with name actors include Colin Farrell, Rachel Weisz, and Lea Seydoux. Because his work typically involves stilted dialogue and ritualized actions, and incorporates elements of dance and performance art, the transition to English didn’t appear to cramp his style. 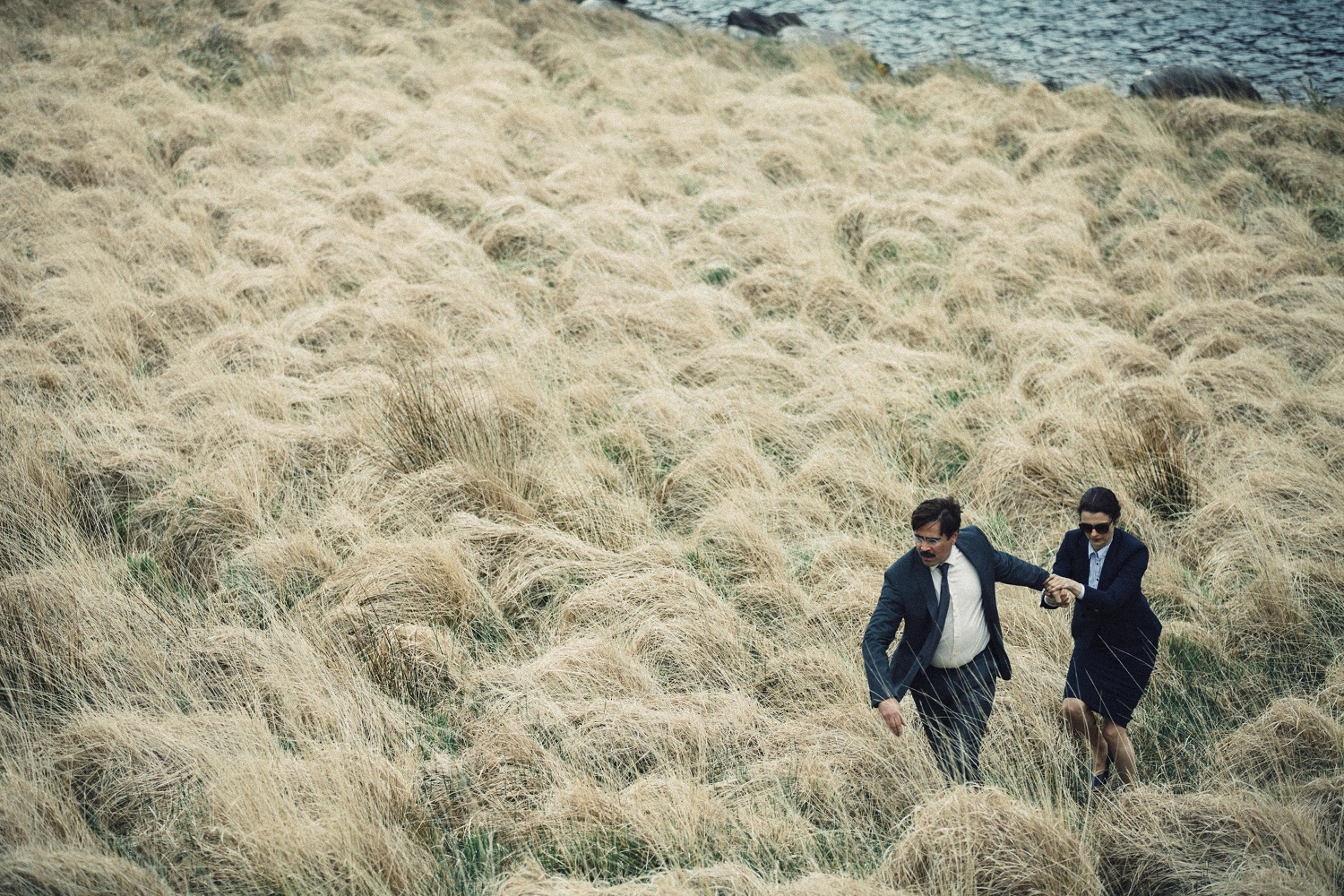 The plot is set in the future where single people, whether widowed, divorced or never partnered, are sent to what appears to be a luxurious seaside spa. They are stripped, issued new clothing, and told that they have forty-five days to fall in love with a fellow guest. If they remain single, they will be transformed into an animal.

A new guest checks in along with his dog. The dog is his brother, who failed the test the previous year. The man must state in advance which animal he chooses to be if he also fails. Our hero, who has obviously given this matter some thought, chooses a lobster because it has blue blood like an aristocrat, and, it often lives to be more than 100.

In the early, edgy setup, Lanthimos introduces a host of punishing but funny exercises to which guests are subjected. New arrivals spend a couple days with one arm handcuffed behind their backs, “To remind you how much better the world is when there are two of something.” There are pantomime skits amateurishly performed by uniformed waiters to demonstrate the pitfalls of life as a single man or woman. There are meet-and-greet sessions where each guest reveals an identifying characteristic in order to find a mate with a like proclivity. The man with a limp seeks a woman with a limp; the heartless woman seeks a heartless man. Things get more dangerous when a daily exercise involves chasing each other through the woods with tranquilizer guns.

Given that his allotted days are running out, the new man chooses to get himself partnered by pretending to have a characteristic that makes him a match. Pretending to be heartless, he is awarded the keys to a double room with the heartless woman. The fakery proves his undoing in an incident that sent shock waves though this morning’s audience. He runs away through the woods to an outlaw colony of escapees from the spa. As the director’s sense of absurdity would have it, the rules of this band are even more stringent. There are reversals yet to come, and it develops that Lanthimos has only just begun to yank our chains. 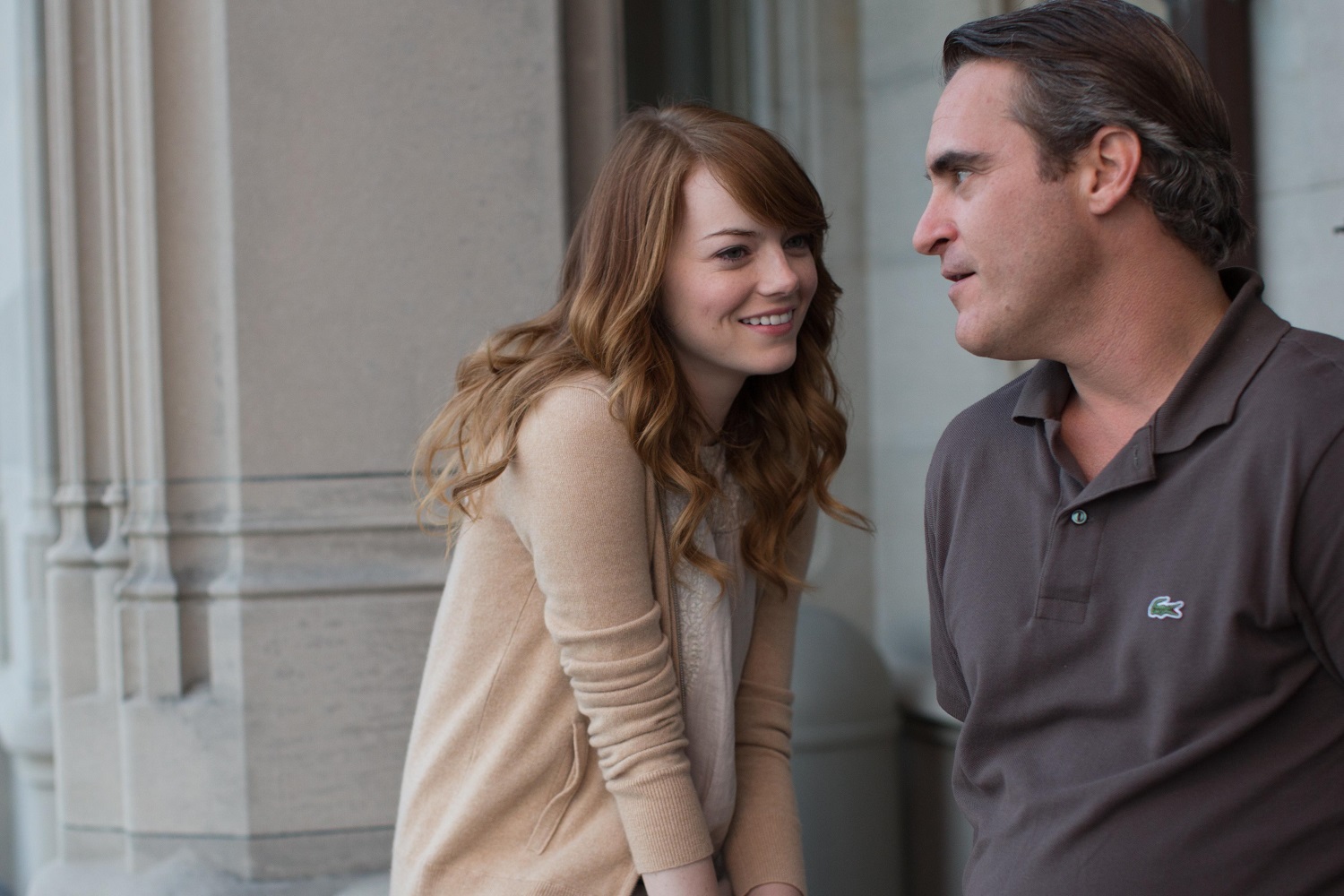 When it comes to games, Woody Allen is an old hand. I’m not much of a fan, although I did like “Midnight in Paris,” just because it was so unabashedly a big old-fashioned mushy valentine to the French. Mostly, it seems to me like Monsieur Woodee has been reshuffling the same deck for years. However, this is France, and Allen is so high in their pantheon of cinema gods that seeing his new “Irrational Man” here in a special screening out of competition seems de rigueur.

“Irrational Man” found an approving audience in its press screening to circa 3000, judging by the solid applause at the end. It’s entertaining to be sure, marked by competent but not brilliant direction, snappy Allenesque dialogue, and attractive stars in Joaquin Phoenix, Parker Posey, and Emma Stone.

Wowing his undergrads with his breezy style and with cynical pronouncements like, “There’s a difference between the theoretical world of philosophy bullshit and the real world,” Lucas becomes more than a mentor to his best and prettiest student Jill (Stone), although she already has a boyfriend. The familiar Allen types, tropes and conventions kick in: the conflicted man given to nonstop cerebral babbling and obsessive navel gazing; the adoring ingénue; and the love triangle in the form of the choice between the hot-to-trot babe and the pure young idealist.

Rita acts the down-and-dirty lover and Jill does the mothering, but Abe can’t get his mojo back until an overheard conversation in a restaurant causes him to devise a scheme to give his life purpose. It involves committing a major crime, which is where Allen reveals the philosophy teacher’s hypocrisy and moral cowardice while bringing his two women to the moment of truth. In all, it feels by-the-numbers, a fun but fairly forgettable minor work.