The critics and industry reps arriving for Saturday’s final Cannes competition press screening are looking haggard eleven days into the festival. The film begins at 8:30 am, but as usual, the Grand Theatre Lumiere starts to fill up by 7:45 am. Some people are leaving today, and others have been up all night. Lingering jet lag and overwork are burnout factors. One writer calls Cannes a hellhole; a festival programmer declares that she loves it anyway.  Most of us look like the walking dead.

The analogy is apt in light of the premiere of “Macbeth” by Australian Justin Kurzel (“Snowtown”), which was like Shakespeare enacted by respectful zombies. This big lavish widescreen production features Michael Fassbender in the title role and a whispery British-accented Marion Cotillard as the scheming Lady Macbeth.  The film is visually flashy but with a flat sameness that never varies. As a result, it’s astonishingly dull, with actors walking through their roles as if every one was on heavy sedatives.

For much of the film, Kurzel treats Shakespeare’s complex story as if it were a pantomime with voiceover, which frees him up to work on the fog-bound atmosphere. Dialogue is often fashioned as the inner voice of his characters rather than words coming out of their mouths. Every bit of speech is delivered in a slow, measured tones heavy with import and full of pregnant pauses, but strangely lacking in emphasis or variation.

There is virtually nothing that can shake these characters out of their catatonic state, whether it’s the death of a king or the death of a wife. Henchmen discovering the bloody body of Duncan following Macbeth’s murder of him react with mild concern. Fassbinder expresses slight surprise at the death of Lady Macbeth, and delivers the “Out, out brief candle…” speech as if he were calmly reading her a bedtime story.

The ponderous approach seems calculated to broadcast that this “Macbeth” is meant to be perceived as high art in some stilted definition that would exclude a great cathartic story of raging emotion and runaway ambition. It comes off instead as a deadening facsimile that is more likely to reduce audiences to the same state of stupor as the actors.

One of the sole pleasures in watching “Macbeth” was savoring the soundtrack music in the vast space of the Grande Theatre Lumiere, which boasts the world’s best cinema sound system. A big, bombastic music track like that of “Macbeth,” gives the system a full workout, providing viewers with a thrillingly immersive experience that is a rare reminder of what surround sound in a movie theater can be. 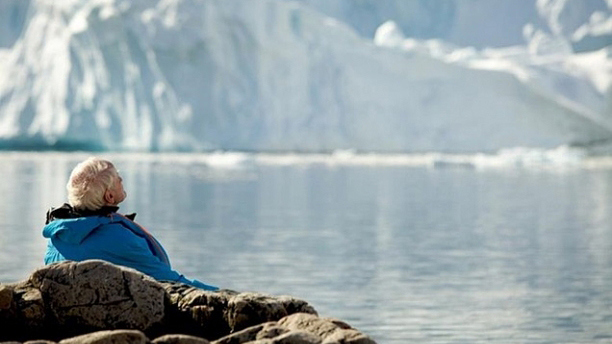 The festival concludes tomorrow night with a special screening of the documentary “Ice and the Sky” by Luc Jacquet (“March of the Penguins”), following the awards ceremony. Actually, with my imperfect comprehension of French, I was rather hoping that “La Glace et le Ciel” meant “The Ice Cream and the Sky,” since every gelato place in town has a sign that reads “Glaces.” Alas, that fantasized version is not to be.

“Ice and the Sky” is an environmental documentary about Claude Lorius, the 82-year-old French scientist whose pioneering studies in Antarctica have accurately predicted the earth’s present pattern of global warming. The film fascinates with a history of Lorius’s Antarctic expeditions, assembled through footage shot over the decades since 1957, and accompanied by his own illuminating narration.  The film has the intended horrifying effect of bringing home the ravages of global warming with haunting contrasts in which the towering glaciers and endless ice banks of the past give away to valleys filled with filthy snow and ominous piles of rocky rubble.

The 68th Festival de Cannes began on a socially conscious note with “Standing Tall” almost two weeks ago, and ends on a film that emphasizes that we are all global citizens. It remains to be seen what message the Coen brothers and their jury will decide to deliver with their Palme d’Or choice Sunday night.