At Cannes, "Red Army" and "Self Made" Look at Culture Clash

CANNES, FRANCE—Borders and national identity were the subjects of two films I saw in Cannes today—one an offbeat Israeli comedy, the other an American documentary about hockey players from the former Soviet Union.

The Critics' Week selection "Self Made" marked a homecoming for filmmaker Shira Geffen, half of the two-director team behind "Jellyfish," which won the Camera d'Or (best first feature) at Cannes in 2007. Before the screening, Geffen suggested that even she didn't quite know what her movie was about. The setup requires an imaginative leap, but it's not complicated: Through a surrealist sleight of hand, an Israeli gallery artist, Michal (Sarah Adler), and a Palestinian factory worker, Nadine (Samira Saraya), end up swapping identities. Still speaking their own languages, they seem intrigued (if not fazed) by life in their new roles.

The cosmic connection begins even before the two switch places, when Michal complains that the new bed she's had delivered is missing an assembly screw. Nadine, the person who packs the screws, is quickly fired. The two swap identities at checkpoint holding cell, which seems to be the epicenter of the movie's Kafka-esque misunderstandings—a place where mp3 players are mistaken for explosives and explosives are mistaken for baby bumps. The idea of role reversal is not a novel one, but Geffen approaches it with unusual subtlety. The (hopeful) implication is that identity isn't binary. Nadine and Michal pass in and out of each other's lives as if empathy were no feat at all. 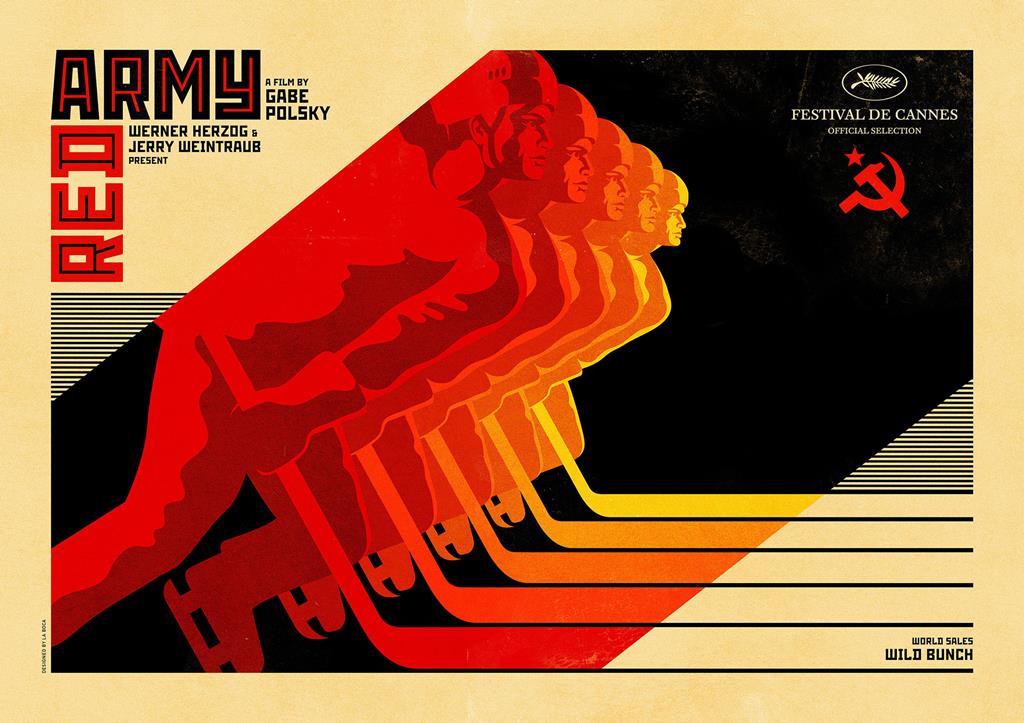 Culture clash is also one of the themes of "Red Army," a documentary by Gabe Polsky that premiered tonight as part of Cannes's Special Screenings program. The Chicagoan director, the son of immigrants from the former Soviet Union, credited his parents with sparking his interest in the topic; still, the film mostly recounts the history of Soviet hockey in the kind of jazzed-up, greatest-hits rundown you might see on ESPN. The movie's central figure is "Slava" Fetisov, a champion defenseman for the U.S.S.R. who served on the Soviet Olympic team and went on to play for the New Jersey Devils and the Detroit Red Wings before returning to Russia to go into politics.

Hockey fanatics will probably have more facility with the material; a seemingly disinterested Fetisov, who begins and ends the movie fiddling with his PDA, runs through colleagues' names as if flipping through a yearbook. Polsky makes the decision to include his own questions in talking-head interviews, and at times, the director seems to speak more than the people he's chatting with. Nor is he aggressive about digging: At one point, when Fetisov gives a non-answer to a question about his interaction with a Soviet defense minister, Polsky simply responds, "Okay"—the sort of detail that might normally be edited out.

However problematic the presentation, "Red Army" is built from rich material. Interviewee Vladimir Pozner suggests that the Red Army Team could be seen as a kind of "proof that the Soviet system was the best system," in the sense that it promoted camaraderie and showcased a group of trained athletes working in concert for a collective good. Later, when players began making the transition to America, their discipline and tendency to pass instead of shoot baffled American fans, who were used to a rougher type of play. (As one newscaster notes in an old clip, weren't there to see the Bolshoi Ballet.)

The political history is also fascinating: Soviet athletes who were given permission to play for the NHL were expected to donate the majority of their salaries to the government. (Fetisov says his family was threatened.) And even with success, the emigrant athletes often felt ambivalent about their lives in America. Filled with old clips, "Red Army" goes far too light on historical and personal details—by far its most interesting aspects.