If I can help somebody as I pass along,
if I can cheer somebody with a word or song,
if I can show somebody how they’re traveling wrong,
then my living will not be in vain.

This excerpt of a sermon by Martin Luther King, Jr. is tenderly recited by a man while aboard a train. He’s seated across from a younger man who looks to him for the paternal guidance he was denied in his youth. This random encounter transforms into an enriching moment of human connection while under the watchful, inconspicuous gaze of documentarian Albert Maysles in the sublime new film, “In Transit,” the last feature made by the legendary filmmaker before his death at age 88 this past March. I can’t imagine a more fitting final bow. In a span of 76 minutes, this picture weaves together an extraordinary array of vignettes, some lingered on for several scenes, others glimpsed in a single shot. Led by Albert, a crew of five directors from the Maysles Documentary Center observe the lives of passengers as they ride Amtrak’s Empire Builder as it moves through the Pacific Northwest, past gorgeous mountain vistas and barren landscapes. The trip offers ample time for reflection, escape and companionship between people who may likely never see each other again. None of the individuals onscreen are identified by name, and that’s appropriate. This film is an ode to all the nameless souls who leave a lasting impact on our lives in the brief time we share with them.

Maysles, along with co-directors Lynn True, David Usui, Nelson Walker and Benjamin Wu, allow character to drive the editing rather than continuity, though the shifts between train locations are always seamless. There are people running toward and away from relationships, excited and fearful of their destinations. A mother leans over her son to punch the invisible shark that he’s dreamed up during his playtime. A train conductor confesses that this is the only job he’s wanted ever since he was a kid, much to the chagrin of his parents. There are grumblings about the oil drilling that’s infiltrating the land (prompting desperate fortune-seeking men to head north), and audible groans whenever the train is stalled by a seemingly endless line of oil tanks. Some people desire to cast off the labels society has imposed upon them, others merely want to clear their heads. And then there’s the photographer, a gray-haired man harboring a youthful curiosity not unlike that of Maysles. He takes snapshots of various people on-board, particularly a young pregnant woman whom he befriends (she’s a few days overdue and hoping to get back home before the baby arrives). It’s only toward the end that the photographer shares with us a little more about himself. He’s a marine corps veteran who has suffered from PTSD and depression. A recent heart attack inspired him to take this ride in order to see more of the world. “I know I’ll never be out here again,” he replies wistfully. “It’s been a good trip.” 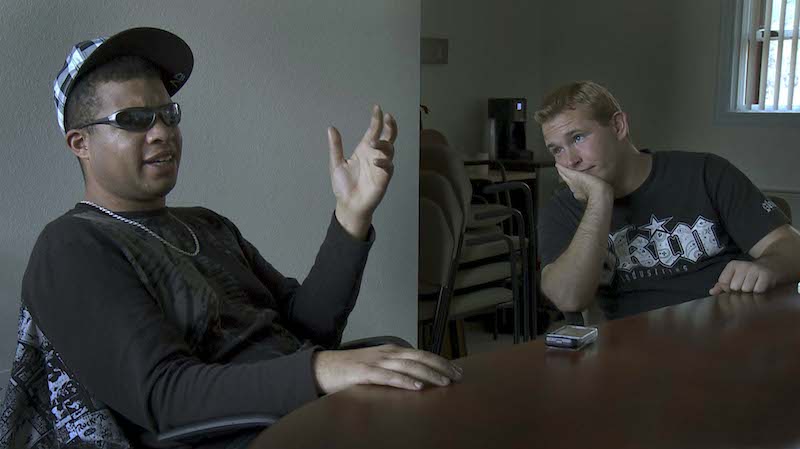 These lyrics from the Tears for Fears classic, “Mad World,” are not heard in Laurent Bécue-Renard’s emotionally grueling documentary, “Of Men and War,” but their mournful spirit haunts every frame. I was reminded of them when a war vet sits down at a piano to play the tune during a party held at The Pathway Home, a PTSD therapy center where the majority of the picture takes place. The camera is unflinching as it regards these men, often in extreme close-up, sharing agonizing stories from the battlefield while wrestling with violent rage and turbulent depression that threaten to overwhelm them at any moment. One man finds himself unable to recount an especially grisly tale without being interrupted by his own gag reflex. Another repeatedly resists the words of his therapist, getting up to leave almost as soon as he’s sat down. At a running time of nearly two-and-a-half hours, most audiences will undoubtedly feel compelled to take a breather themselves at times, and of course, that’s the point. We are put in the ringer with these men, and I felt like I acquired a deeper understanding than ever before of the psychological toll that war has on those who serve.

These men have been systematically broken down. They must not feel any attachment to the people they’re ordered to kill or bury. Suddenly, the very notion of coming home and engaging with their wife and kids sounds like the most insurmountable of tasks. In order to regain their humanity, they can no longer be numb to the past. No wonder so many soldiers prefer returning to the battlefield. Some of the most potent scenes in the film take place in the veterans’ personal lives, as they strive to tuck their children in bed and run errands with their wives without flying off the handle. The film will often jarringly cut from a jovial social occasion—a wedding, a parade, a sing-along Christmas party (where one vet quips, “Where are Gremlins when you need them?”)—to another intense therapy session, powerfully illustrating how these demons never cease reverberating beneath the surface of everyday life. Instead of opting for a desaturated shaky cam style, Camille Cottagnoud’s cinematography is staggeringly beautiful, and never less than impeccably composed. Bécue-Renard told the audience prior to the screening that this film was the second part in a trilogy titled, The Genealogy of Wrath. The first installment was 2001’s “Living Afterwards: Words of Women,” which took place in a halfway house for women and children who survived the Bosnian War. Here’s hoping that on Veterans Day, theaters around the county will screen “Of Men and War,” with free admission for servicemen and women, and their families. That would be a real tribute. 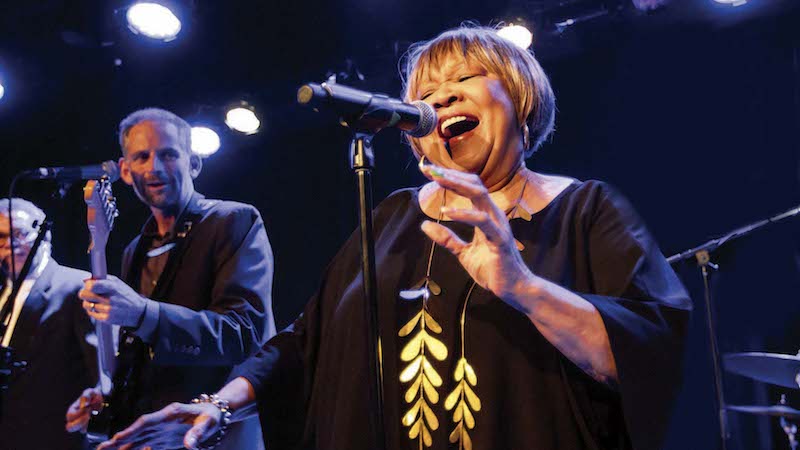 You’re not alone
I’m with you, I’m lonely too
What’s that song
Can’t be sung by two?

Mavis Staples sang these words in the opening moments of her title track on 2011’s album, You Are Not Alone, which went on to win the beloved icon her first Grammy at age 71. It’s one of many career highlights celebrated in Jessica Edwards’ “Mavis!”, the closing night film at AFI Docs 2015. The picture, which is set to air later this year on HBO, came as a breath of rejuvenating air after a series of movies loaded with difficult subject matter. Staples was blessed with a family that, by all accounts in this film, was not damaged by its entrance into show business. She adored her father, Roebuck “Pops,” and relished the opportunity to sing with him and her siblings in their group, The Staples Singers, which lasted for 46 years. The vivaciousness that Staples exudes in every onstage performance and one-on-one interview is so infectious that it’s hard to not smile along with her. She’s one of those resilient individuals who has managed to weather the storms life has sent her way, and not only remain standing, but continue to reign as a force of nature herself, bringing down houses with the splendor of her ageless voice. Watching her, I was reminded of a Judy Collins concert I attended a few years ago in northern Illinois. From the moment Collins opened her mouth, I felt as if I were in 1968. It was as if time had melted away. That’s the sort of transportive magic a great artist can cast, and Staples has it in spades.

Edwards builds a persuasive case for why the Staples Singers should be regarded as a groundbreaking force in American music with their subversive blend of gospel and blues, as well as their embracement of civil rights anthems (they were the first to cover “Blowin’ in the Wind”). Staples clearly enjoys reflecting on her memories of hanging with future music giants at family barbecues on Chicago’s South Side, “smooching” with Bon Dylan and being called to work with Prince in 1986 (“What Prince?” she remembers asking). The film is thoroughly pleasurable from beginning to end, and I was surprised by how moved I was by the film’s end, as Staples tearfully listens to her late father’s last album, Don’t Lose This, prior to its release this year, a decade-and-a-half after the tracks were recorded. What a warm conclusion to a festival brimming with humanism and empathy. Attending AFI Docs is not all that unlike riding the train in Maysles’ “In Transit.” You see sights that alter your perspective on life, meet people who make you feel less alone and leave forever changed. As Gershwin put it, “who could ask for anything more?”