A comedy beyond time and space

Paul Rudd walked by me on Main Street in Park City wearing reflective sunglasses so I couldn't see if his eyes could see that my eyes saw him and were staring. I knew it was him from the way he walked. I can recognize a gait a mile away. But I didn't know yet that "Prince Avalanche" was a masterpiece or I could've had a good conversation starter.

David Gordon Green's new film opens with a piece of text that sets it up: In 1987, wildfires ravaged Texas and thousands of people lost their homes. The cause of the fires were never discovered. The story takes place the following year. In the film (Alvin) Paul Rudd, and (Lance) Emile Hirsch play two road workers who travel through the burnt woods of Texas in the summer of '88, setting up traffic cones, painting yellow center lines, and pounding reflective signposts into place. Along the way they talk about things. They fight, they make up and they fight again.

That's basically it, but like "Soldate Jeannette," another one of my favorites at Sundance, "Avalanche" takes immense pleasure in resisting expected emotional narratives, denying us the safety of moments that are either purely dramatic or purely comedic. In "Avalanche" sincere emotion comes with a butt joke, and you won't get a butt joke without some tears. The film is set in the very real and rustic woods, a predictable setting for something emotionally raw to occur, but the colors of all the costumes and props are for the most part primary. There are bright reds and blues and yellows. Oversized overalls, enormous eyeglass frames, hats, and funny looking waders. 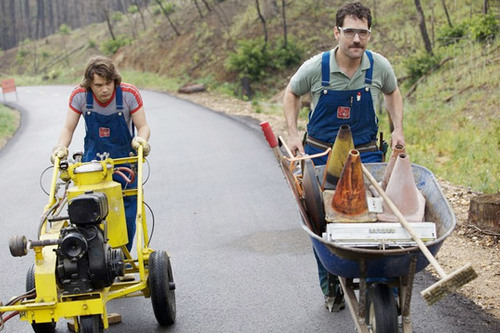 In one particularly touching scene a Super Mario Brothers looking Alvin comes across an old woman rummaging through the burnt rubble of her house. On the edge of tears, she is barely coherent, her voice choked with emotion.

"How will anyone ever know I'd ever been a pilot if my license is gone? What proof will they have?" she asks Rudd.

"Some paper and plastic," she replies.

Looking around at the giant piles of ash that surround them, Rudd asks "Do you think maybe it ... burned up?" and everybody laughs.

Every time we settle into a comfortable genre seat, we're made to get up and switch chairs.

This constantly shifting tone is really the entire point of the film. So strongly does it fight the usual emotional flow that the characters' roles as road workers begins to feel like a joke at our expense. The linear duties of a road worker's job mocks our desire for rules, safety and a clearly guided path in a film that refuses to mark the way. But I think that joke (or what brought that joke into necessary existence), is rooted in Green's understanding and compassion for his particular audience. Green knows that a tidbit of the terrestrial goes a long way in making the story of an emotional woodland journey accessible to those who saw "Pineapple Express" or "Your Highness" but aren't lining up for Tarkovsky.

One of the most exciting things about "Avalanche" is that it feels uniquely American -- or rather, that it possesses a poetry and spirituality for Americans who might be a little resistant to suggestions towards the spiritual (the aforementioned "Your Highness" lovers). The feeling of Americaness is strange since the film is a remake of the Icelandic movie "Either Way" (which I have not seen), but knowing Green's previous work, I think the humor that lends itself to this feeling is his doing.

When I watched "Prince Avalanche" I felt the beginning of something new in American film. A turn toward playing with form. That could be wishful thinking, and I could be completely wrong, but I'm hopeful. The older I get the less patience I have for things that do not (whether in the largest or tiniest ways) actively challenge convention. If you are breaking away from something expected, your actions help to free people. It's as very plain and extremely simple as that.

Many movies do this in many different ways, whether in casting, camera-work, subject matter, etc. Even though I don't like all of them, they still have worth because they help us break free in some way. But a film's value as great art is directly related to how well it disposes of the narrative and an emotional flow that follow plot. The purpose of all art is to help reveal the fallacy of time and space, since time and space are at the root of all suffering. Simply put, if there is no time and no space, there is no loss, and tragedy, such as losing your entire home and life in a fire, is not a scary thing.

As Tarkovsky figured out, film has the unique and very new ability to express this. This is what sets cinema apart from all other mediums and it's exciting when a film, especially an American film, begins to take steps in this direction. Artists from other countries have tended to do this more than Americans, and maybe this has to do with the fact that we're so young and maybe we don't yet know who we are, or haven't given ourselves permission to be great cinematic artists. Or maybe our sensibilities have just been set back by the Hays production code and we need more time to catch up.

Patience and compassion are the things Gordon Green reminded me of. Feeling very angry about Sundance, about the brutal reality of the business of film, and about myself, I hid in the New Frontiers exhibit among the weirdo video art and shed a few tears of overwhelming frustration. It's dark in there and there were probably arty weirdos weeping in every corner.

But then I went to "Prince Avalanche" and remembered that people are scared. They are scared of what they don't know and I'm certainly one of those terrified people. I went to the same awful coffee shop every day in Park City just because I went there the first day. Familiarity trumps almost everything else. But it's hard to see the fear in people more powerful than you. You see it as anything and everything except fear. I said that the older I get, the less patience I have for things that don't break away from the norm, but that's because I'm allowing myself to get harder and that's a terrible thing to let happen. The older I get, the more patience I should have, and the more I should understand why it's hard and nearly impossible for many people to do something different.

In the simplest but most important way, "Prince Avalanche" helps better prepare us for the moments when life strays abruptly from its expected course and it does so with great tenderness and great patience. It knows we're afraid of many things and it understands why. But even if we lose all we know, whether in an unexplained wildfire or in a plot, we will still be okay.