This piece was originally published on August 10, 2016 and is being republished for Women Writers Week.

In her half-century career, Joan Crawford was a master of so many elements of her craft: gesture and silhouette (a lost art), using the shape of her body to tell the story (another lost art), stepping into key lights with emotions at full-throttle (lost art, etc.), as well as the eternal arts of great actresses through time: belief in the reality of the story, understanding her role on an intimate level and a fearlessness in showing qualities considered unladylike or unattractive (rage, ambition, envy). She had enormous range. She could be soft and vulnerable, or she could be calculating and driven. She could play scrappy working girls and she could play elegant rich ladies. Her best work is extremely specific. (For example, her near-sightedness in "Humoresque" is so believable I almost find myself squinting whenever she takes off her glasses.) She had great affection and empathy for the characters she played. She cared about the dreams of working girls looking for a way out. She had been one herself. She came from nothing, and only people who came from nothing can possibly know how awful it is and how you will do anything to improve your status. Crawford was extremely smart in choosing material for herself once she was in a position to do so. She had to campaign hard for some of her best roles. She understood her own persona intimately. Acting teachers often say that self-knowledge is even more important than talent. Crawford knew which roles were "hers," even before she had landed them.

Perhaps most importantly, she understood what she meant to her audiences, and valued the people who came to see her pictures, who were her fans. As she said in an interview with the BBC in 1966, “You want to bring the audience in so close to you. You want to put them in your lap, in the palm of your hand."

James Baldwin begins The Devil Finds Work, his indispensable book of film criticism, with a memory of seeing Joan Crawford in a movie when he was a child. It wasn't even her famous face that made an impression on him. It was her back, in movement: 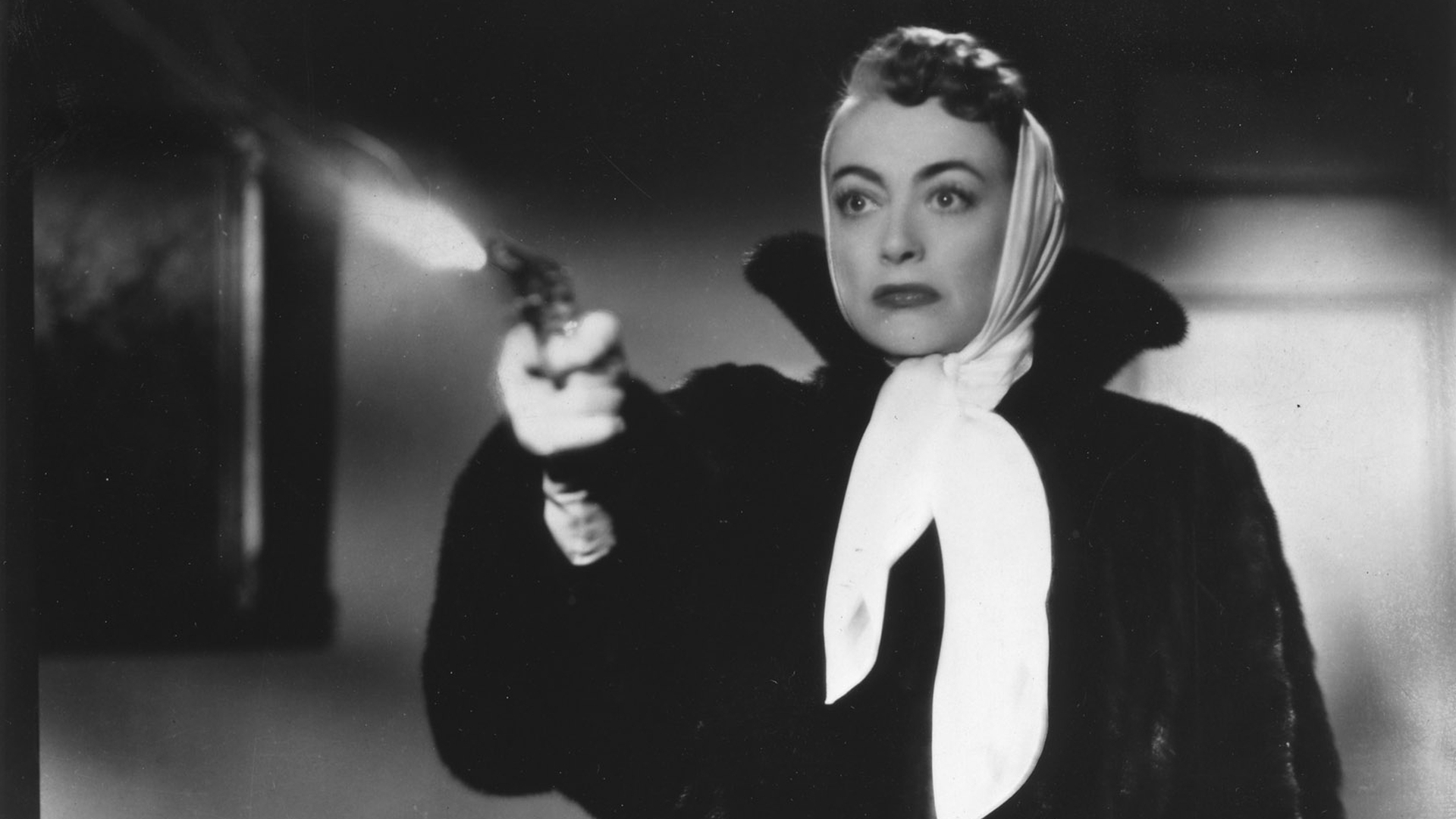 "Joan Crawford’s straight, narrow, and lonely back. We are following her through the corridors of a moving train. She is looking for someone, or she is trying to escape from someone. She is eventually intercepted by, I think, Clark Gable.

I was aware that Joan Crawford was a white lady. Yet, I remember being sent to the store sometime later, and a colored woman, who, to me, looked exactly like Joan Crawford, was buying something. She was so incredibly beautiful—she seemed to be wearing the sunlight, rearranging it around her from time to time, with a movement of one hand, with a movement of her head, and with her smile—that, when she paid the man and started out of the store, I started out behind her. The storekeeper, who knew me, and others in the store who knew my mother’s little boy (and who also knew my Miss Crawford!) laughed and called me back. Miss Crawford also laughed and looked down at me with so beautiful a smile that I was not embarrassed. Which was rare for me." 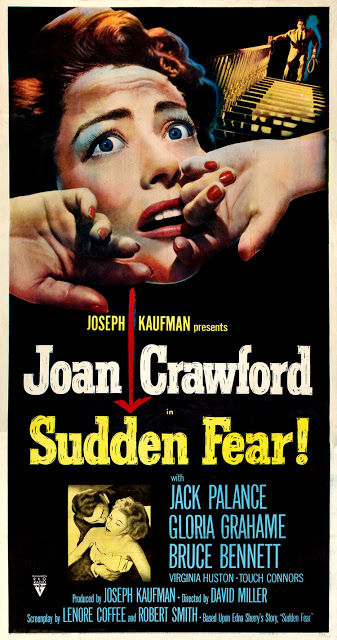 Joan Crawford's reputation took a hit with her daughter Christina's lethal book Mommie Dearest, followed by the film starring Faye Dunaway as a kabuki version of Crawford. Joan Crawford may not have been a very good mother, although Christina Crawford is an unreliable narrator at best. But the damage done to the perception of Crawford's acting career has been catastrophic. There are other reasons for the "hits" Crawford (and others of her era) have taken, especially the fetishization of Method acting (or, a misunderstanding of it) that has so colored audience perception that anything that's not subtle or interior-focused seems "over the top." Or "campy." Among classic Hollywood fans, of course, Crawford's reputation continues to soar, and with things like TCM and box-sets of her films, much restorative work has been done in terms of visibility and accessibility to the breadth of her career.

One of Crawford's finest performances is in 1952's "Sudden Fear," which will be playing at the Film Forum in New York in a DCP restoration for a week starting August 12, a restoration hopefully is on its way to other arthouse theaters around the country. Since the magnificent and nightmarish noir effects of the film have been well-covered by many other worthy writers, a closer look at Crawford's superb performance is in order. "Sudden Fear" got Crawford her third (and final) Oscar nomination. Directed by David Miller, "Sudden Fear" also received Oscar nominations for co-star Jack Palance, Charles Lang for his stunning cinematography, and Sheila O'Brien for costumes. ("Miss Crawford's Wardrobe" gets an entire screen in the credits: O'Brien for gowns, with others handling jewels and furs and hats and lingerie.)

In 1952, Joan Crawford was 47 years old, and considered far too old to be a romantic leading lady (then and now). In "Sudden Fear" she plays Myra Hudson, a middle-aged heiress who is also a successful Broadway playwright (because of course). Myra finds herself hopelessly in love, presumably for the first time, with Lester, a much younger man (Palance, 33 years old). The age difference is not mentioned, but it's apparent when they're onscreen together, and it's apparent—most of all—in Crawford's performance. Myra looks at Lester not just with love, but with wonder and, more touchingly, relief that he has appeared in her life, that after all this time she doesn't have to be alone. Then Gloria Grahame's Irene strolls into the picture, and you know that whenever Gloria Grahame shows up, things are going to go south. Fast. When Myra discovers Lester's treachery, she is hurt and angry, but also disappointed and humiliated, and it is the humiliation that is the most striking part of her performance. Myra remembers how passionately she had made love to him, how seemingly passionately he had made love to her. He had narcotized her with sex. She cringes with shame when she looks back on it. 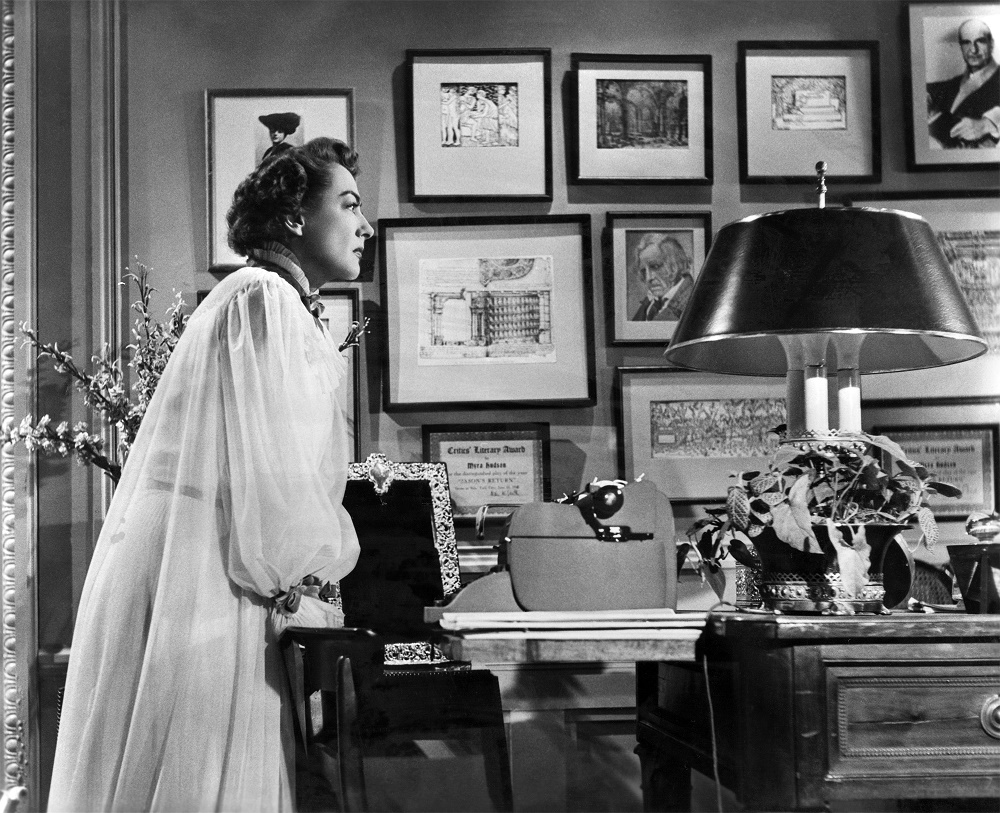 Tom Milne from Time Out London called Crawford's performance "nervejanglingly extravagant." "Nervejanglingly" is right. There is a sequence that is up there with the best work Crawford ever did: Myra hides in a closet, face drenched in sweat, hand clamped over her mouth to suppress the sound of her breathing. Even more astonishing, there is only a thin band of light illuminating just a portion of her face. Crawford does more within that thin band of light than most actors can do in full spotlight.

Crawford was so good at physical business (Mildred in the weeds as a waitress in "Mildred Pierce," making coffee in her apartment in "Daisy Kenyon," her glasses business in "Humoresque," etc.) Everything is specific, coordinated effortlessly with the camera movements. It doesn’t look like blocking. It looks like a woman living her life. In a BBC interview from 1966, she spoke of her preparation for "Whatever Happened to Baby Jane?" and how she practiced with a wheelchair at home so that it would look realistic onscreen. Crawford says, beaming, "It's wonderful to be a perfectionist." Considering her daughter's vicious book, that comment may call up images of wire hangers, etc. But in acting terminology, perfectionism like hers is what made possible her genius onscreen. Every moment, every tear that fell down her cheek, every close-up, every walk across the room, had to be at a level of excellence where she, the actress, was satisfied. You don't become a legend by skimping on the details.

"Sudden Fear" ends with an event of physical business from Crawford, as Myra meticulously follows through the steps of her complex plan to get herself out of the trap. The plan involves apartment keys and lipstick, white gloves and stationery, head-scarves and stocking garters. She races from room to room, in the zone of action, playing out an enormous amount of business, often in real time, all while beneath surges enormous waves of adrenaline and terror. It's a tour de force.

Of similar power is the "dictating machine" scene, where Myra first learns that she has let a predator into her life. As she listens to what's on the tape, she goes through every emotion under the sun. There's confusion, denial, hurt, denial again. Then heartbreak, then panic so excruciating that she runs to the bathroom to vomit. Her work in this scene should be studied by young actors as an example of the pinnacle of what film acting can be, as well as the importance of listening, listening being the most important "skill" any actor needs to have. Beginning acting classes are often about helping young actors learn how to really listen onstage. The entire scene is about Crawford listening. And through her powerful and active listening, she struggles to understand, she can't bear what she hears, she resists, she succumbs, she weeps, her stomach heaves, she flees to the bathroom.

The restoration of "Sudden Fear" is playing at the Film Forum from Friday, August 12 - Thursday, August 18. Click here for more information.