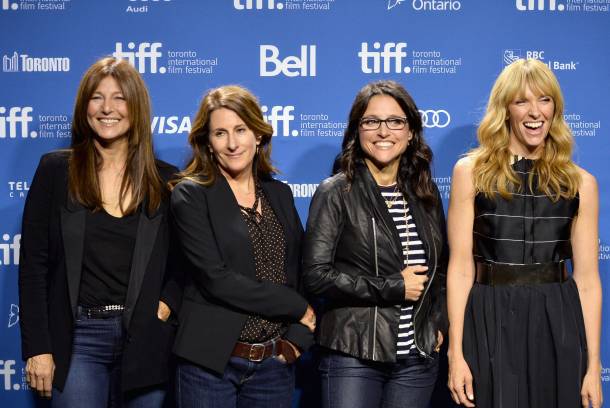 "The movie ends, and a simple note, 'For Jim,' rolls across the closing credits. The audience rose to their feet as Holofcener and the actresses came back onstage for the Q&A. You couldn’t help but feel for everyone up there, particularly Louis-Dreyfus, who shares so many great moments with him. They all seemed to have had a rough time watching the movie, but also seemed moved by the reaction. Toni Colette and Louis-Dreyfus grabbed hands and held on tightly. It took only twenty seconds for someone to ask Louis-Dreyfus about her favorite scene with Gandolfini.'Well, there are an endless number of fond memories,' she began, before her voice failed her and she choked up. It was the final scene, she said once she recovered, which they tried over and over again, improvising different lines and different sentiments. 'And when we nailed it, or felt like we nailed it and we did what you see is in the final cut here,' she said, 'we just went off and fell into each other’s arms because we knew that it felt right.' As they stepped offstage a few minutes later — the Q&A had been mercifully short, but full of good humor — several cast members, likewise, fell into each other’s arms. Colette and Louis-Dreyfus were still holding hands, and didn’t look like they planned to let go anytime soon." 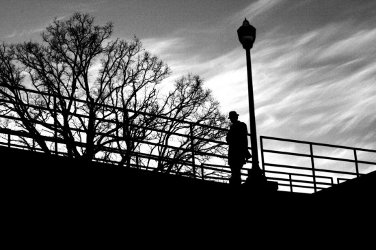 "A moody cynicism about the scales of justice and America’s flawed postwar capitalist system are running themes. These reflect an America recovering from the Great Depression, only to emerge in World War II, which gave way to the Cold War. The archetypical American Dream of the ‘50s is not part of the Noir equation. Noir’s alienated characters are naturally distrustful, seen-it-all, people out to salvage what they can from a ruthless society. They fight dirty. They’re survivors — but they jealously guard their individuality. Death is always just around the corner for characters ready to go out with their sex drive, dignity, intellect, wit, and stylish charm intact. Guns, cigarettes, booze, and sleazy hotel rooms — many of the scripts were adapted from pulp fiction magazines — come with the territory. As its name implies, the visual aspects of film noir emphasize the high contrast between the black and white extremes of the film stock used predominantly during the period. German Expressionist cinema (reference 'The Cabinet of Dr. Caligari' – 1923) was influential on cinematographers attempting to capture a dislocated sense of social isolation that defined characters whose motivations are often centered around their need to escape." 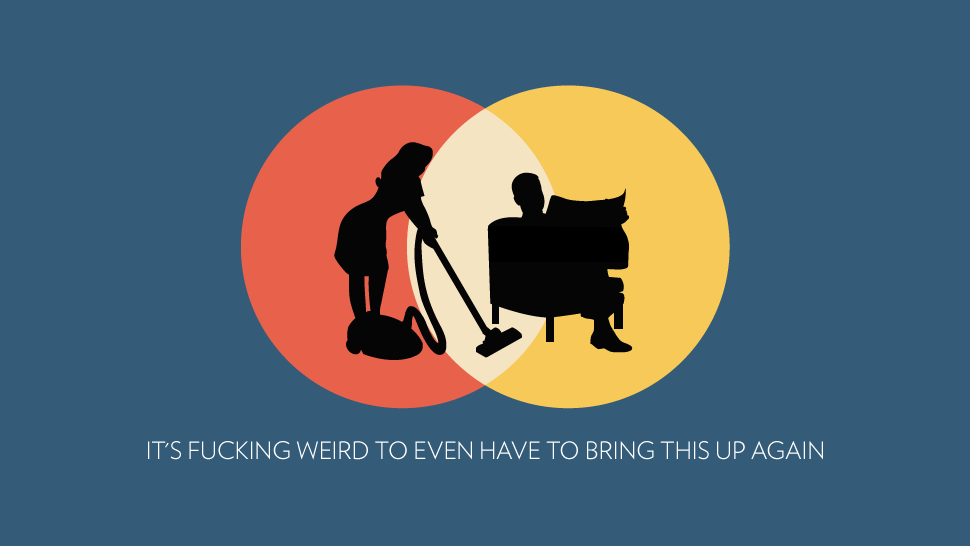 "Women Are Doing the Man Things But Men Won't Do the Lady Things." Tracy Moore of Jezebel sighs, then offers a thorough analysis of how and why "men are the new women" couldn't be further from the truth.

"All this perpetuates the current stats, where somehow we say we want equality but then fall into these really traditional roles — not because they are more natural, but because it's been drilled into our heads since birth. But this isn't making most people happy: We know that marriages are happier and divorce rates are lower when unions are egalitarian. Add to this the cultural narrative that pits women and men against each other, she as the nag, he as the slob, and it's no wonder perfectly intelligent, well-meaning people would rather watch The Bachelor than squabble over why he still won't clean up the goddamn dust bunny that has grown to the size of a balance ball chair in the corner of the living room. But, sorry. This shit matters. This isn't a pick-your-battles thing. I'm not talking about bean-counting chores within an inch of their equality. I'm talking about the fact that there is no way around it: the definition of equality at home hinges on agreed-upon negotiating of chores and childcare. They key is agreed-upon.." 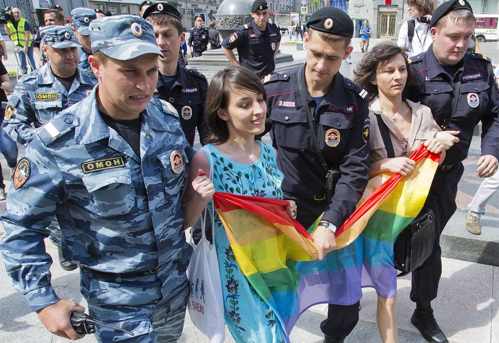 "I Will Out Closeted Anti-Gay Russian Lawmakers." By David Badash for The New Civil Rights Movement.  Russian LGBT journalist and activist Elena Kostyuchenko has launched a campaign against closeted proponents of a proposed bill in her country that will remove children from all LGBT parents and from all same-sex couples.

"Offering her email address, Kostyuchenko asked for 'information, correspondence, photographs… about the deputies of the State Duma concerning LGBT activities.' This week, the head of a Russian nationalistic political party who is a Deputy minister in Russia‘s Duma — their version of the House of Representatives — filed a bill built on President Vladimir Putin‘s law banning so-called 'homosexual propaganda.' Comparing homosexuality to child abuse, drug abuse, and alcoholism, State Duma Deputy Alexei Zhuravlev said he believes that so-called homosexual 'propaganda' must be banned not only in the public space but also in the family, the AP had reported. Zhuravlev’s bill would would in essence forcibly kidnap untold thousands of children from their parents. Kostyuchenko calls her campaign promising to out any LGBT lawmaker who votes for Zhuravlev’s bill a 'nuclear bomb' that should be used only as an 'extreme measure.' But, she says, 'Now, it seems such a time has come.'" 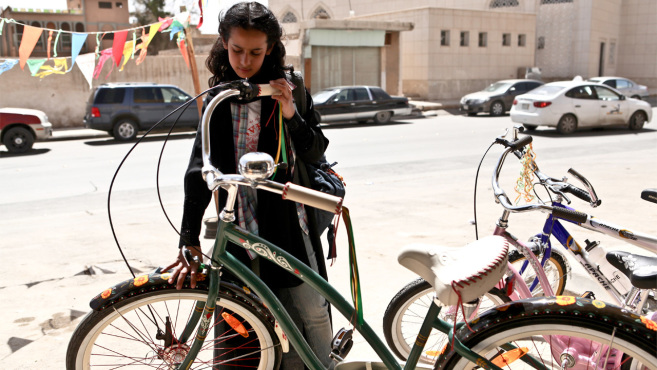 "Wadja." Time Out New York's Keith Uhlich gives four stars to the first feature to be shot in Saudi Arabia by a female filmmaker from that country.

"Plenty of films have similarly colorful production histories and die onscreen, done in by their own well-intentioned didacticism. What sets Wadjda apart is Al-Mansour’s confidently light touch (this is one of the most outwardly cheery jeremiads ever made), which allows the uneasy existence between the young protagonist and the stringent society in which she lives to gradually gain in force. Even as the narrative treads the expected—a little hysterical drama between mother and daughter here, a climactic Koran recital contest there—you're all too aware of underlying tensions. (Among the peripheral details that cast a pall are a construction worker’s semiserious rape threat and a department-store advertisement, lingering in the background of a parent-child shopping scene, defaced to cover up a female model’s bare skin.) There’s lots of crowd-pleasing triumph at the end of Wadjda’s gauntlet, but it’s the implied tragedy of her future that cuts like a knife to the heart." 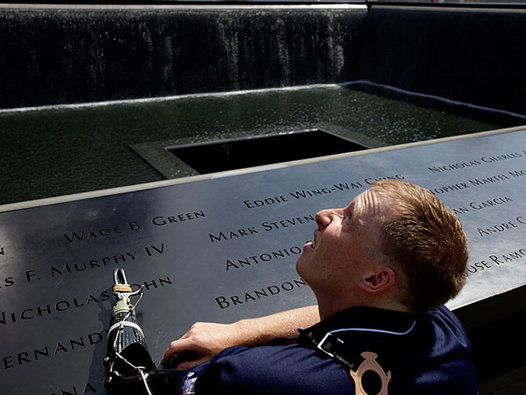 US Marine Cpl. Mark Litynski of New Hope, Minn., looks up at One World Trade while visiting the 9/11 Memorial at Ground Zero in New York on July 4, 2012. Time moves forward but we don't forget.