"Lessons We Can Learn From 'Rosemary's Baby'": A "sartorial masterclass" from AnOther Mag's Olivia Singer.

“When, in 1967, Ira Levin published the novel Rosemary's Baby, he could scarcely imagine the impact that it would subsequently have on the world of fashion. A deeply disturbing thriller simultaneously centered around the occult and gender tropes of the era, in 1968 Roman Polanski adapted it into a film – and the sartorial success that he achieved has since influenced designers from Miuccia Prada to Joseph Altuzarra. Rather than succumbing to the gothic, witchy aesthetic familiar to so many horror films, he employed costume designer Anthea Sylbert to, as she explained, put people at ease and thus make the impact of the storyline even more disturbing. ‘Roman said to me, ‘Let's make 'em think we're doing a Doris Day movie,’ Sylbert remembered in Designing Movies: Portrait of a Hollywood Artist. ‘He wanted everything to look ordinary. People are put at ease by ordinary, and in fact, are put at ease by garish. He didn't want anything in the film to seem sinister.’ And so protagonist Mia Farrow was dressed in a saccharine sixties wardrobe, her evil neighbours in garish embellishments and the result was indisputably brilliant. Here, we look at the lessons we can learn from the harrowing tale – aside from, obviously, to avoid motherhood at all costs.” 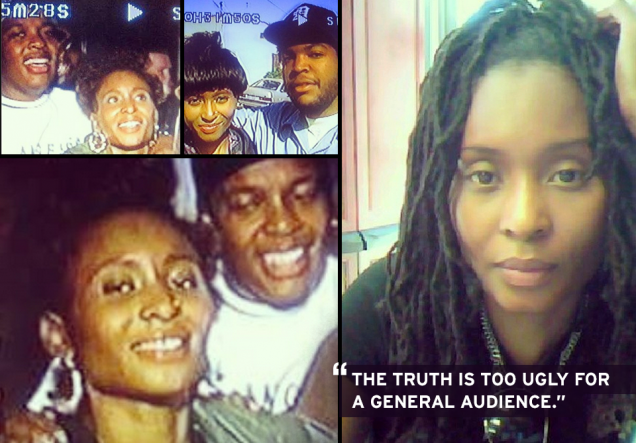 "Here's What's Missing From 'Straight Outta Compton': Me and the Other Women Dr. Dre Beat Up": A powerful piece from Dee Barnes at Gawker.

“I never experienced police harassment until I moved to California in the ‘80s. The first time it happened, I had just left a house party that erupted in gunfire. A cop pulled me over and ordered me out of the car. I was 19, naive, and barefoot. When I made a move to get my shoes, the cop became aggressive. He manhandled me because he supposedly thought I was grabbing for a weapon. I’m lucky he didn’t shoot me. There I was, face down on the ground, knee in my back. In June, I was reminded of what happened to me when I watched video of a police officer named Eric Casebolt grabbing a 15-year-old girl outside the Craig Ranch North Community Pool in Texas, slamming her body to the ground, and putting his knee in her back. Three years later—in 1991—I would experience something similar, only this time I was on my back and the knee was in my chest. That knee did not belong to a police officer, but Andre Young, the producer/rapper who goes by Dr. Dre. When I saw the footage of California Highway Patrol officer Daniel Andrew straddling and viciously punching Marlene Pinnock in broad daylight on the side of a busy freeway last year, I cringed. That must have been how it looked as Dr. Dre straddled me and beat me mercilessly on the floor of the women’s restroom at the Po Na Na Souk nightclub in 1991. That event isn’t depicted in ‘Straight Outta Compton,’ but I don’t think it should have been, either. The truth is too ugly for a general audience. I didn’t want to see a depiction of me getting beat up, just like I didn’t want to see a depiction of Dre beating up Michel’le, his one-time girlfriend who recently summed up their relationship this way: ‘I was just a quiet girlfriend who got beat on and told to sit down and shut up.’” 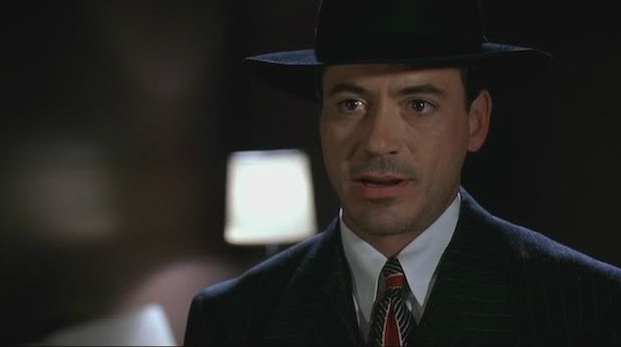 "'I Was Getting Hate Mail Before I Even Started Shooting': Keith Gordon on 'The Singing Detective'": In conversation with Jim Hemphill at Filmmaker Magazine.

“Filmmaker: ‘It’s hard to imagine it as a big-budget studio movie of the kind you were initially describing.’ Gordon: ‘If you made this movie for thirty or forty or fifty million dollars, you would have to make so many compromises to justify that budget that it would just be a total mess. I always wanted to do it, but I couldn’t get in the door when they were talking about doing it as a big-budget studio movie. I would say to my agent, ‘Barry Levinson dropped out, can I get a meeting?’ but they wouldn’t even talk to me. So to have it come back to me and essentially fall into my lap seven or eight years later was a kind of wonderful providence. There wasn’t much prep time though, which is always tough on a small film with a lot of ambition. When you don’t have a lot of money you want to make up for it with time, so that if you can’t afford something you can figure out how to be clever and overcome your limitations. In this case the budget was stretched even thinner because Robert was on probation at the time, meaning we could only shoot in L.A. – we couldn’t go elsewhere to save money like I had done on my previous films. Everything is pricier in L.A., from the crews to the locations, and that was made more challenging by the fact that I didn’t have as much prep time as I was used to. Usually on independent movies you have more than enough time to think about the movie beforehand, because it takes so long to get the money and then the money falls through and then you raise it again…during that time you’re always in a sort of pre-pre-production period, thinking things through. I didn’t have that luxury here.’” 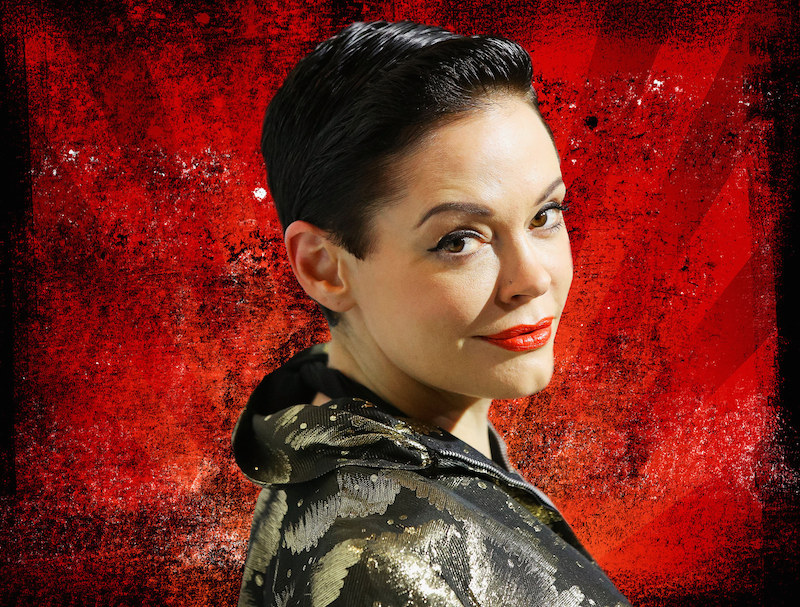 “McGowan, 41, grew up in the Children of God cult. The hippie Christian organization, founded in Southern California by David Berg in the late 1960s, had international offshoots, and McGowan’s father migrated to lead its chapter in Italy, where she was born. ‘To understand my father, he was dishonorably discharged from going to Vietnam, which was very lucky for him because he would have died immediately,’ McGowan said. ‘He was an amazing artist and just really thought he was going to change the world with love.’ It didn’t turn out that way. McGowan’s upbringing was, she said, a ‘bit like growing up in the Medici court.’ There was the religious fanaticism to contend with: “They would come into my room every night and ask me if I believed in God: ‘Have you let God into your heart today?’ And I would say, ‘No.’ I was 3, and I was constantly in trouble.” Also, she felt physically unsafe. ‘It was a high-wire act to stay alive,’ she said. ‘From about 3, every room I go into, I immediately look for what I would kill somebody with if I had to defend myself.’ If the mention of Children of God brings anything specific to mind these days, it’s the cult’s legacy of sexual abuse. McGowan’s family eventually escaped and moved to the United States when she was 10. According to her account in People magazine in 2011, when her father found out that Berg was beginning to ritualize pedophilia, they fled. ‘I was not molested because my dad was strong enough to realize that this hippie love had gone south,’ McGowan wrote at the time. Her father, to whom she was close, died in 2008; her mother, McGowan said, ‘gets irritated if I say anything about’ being raised in a cult.” 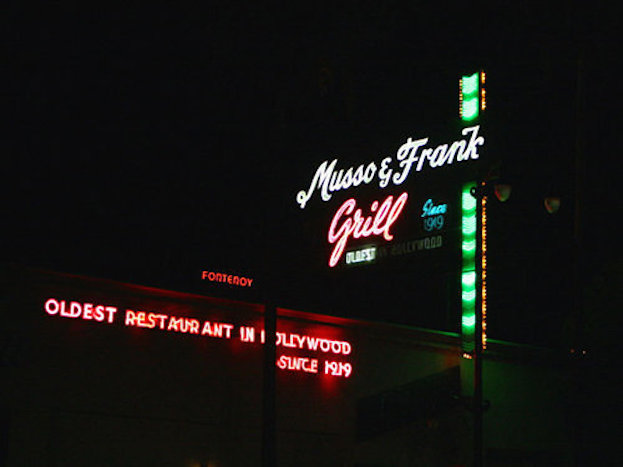 "An Appreciation For Musso & Frank, a Time Machine Back to Old Hollywood": From the staff at Curbed LA.

“During the Back Room's heyday, Dashiell Hammett, William Faulkner, F. Scott Fitzgerald, and Nathanael West (who made reference to the restaurant in his 1939 masterpiece Day of the Locust), amongst other luminaries, all tied one on back there—the urban legend that Raymond Chandler wrote The Big Sleep in the space is probably horseshit (he was a homebody, and didn't much write out of doors), but ah, what delightful horses—t it is. You come to Musso & Frank to be surrounded by such lore; you come to it to forget about the real-life ‘Idiocracy’ unfurling outside its doors. Being in Musso & Frank makes you feel like the Twenty-First Century never began—never mind the fact that the speakers pumping in '20s and '30s music above you weren't actually playing at the time, and were, rather, installed five years ago by the restaurant's latest proprietor, a Millennial fourth-generation descendant of one of its original owners. Regardless of what is real and what is artifice, one thing is for certain—if you throw up in the ladies' bathroom, you're definitely throwing up in the same bathroom Dorothy Parker threw up in. It is borderline impossible these days to order a stiff drink from a man sporting an unironic mustache—Musso & Frank, however, has these men (and drinks) in spades. The waitstaff seems as old as the scenery that surrounds them because they nearly are; many have worked there for half a decade, some longer still. If you want an artisanal cocktail served by a tattooed former bike courier, you go to The Edison. If you want real nostalgia, not the Disneyland version, you go to Musso & Frank.” 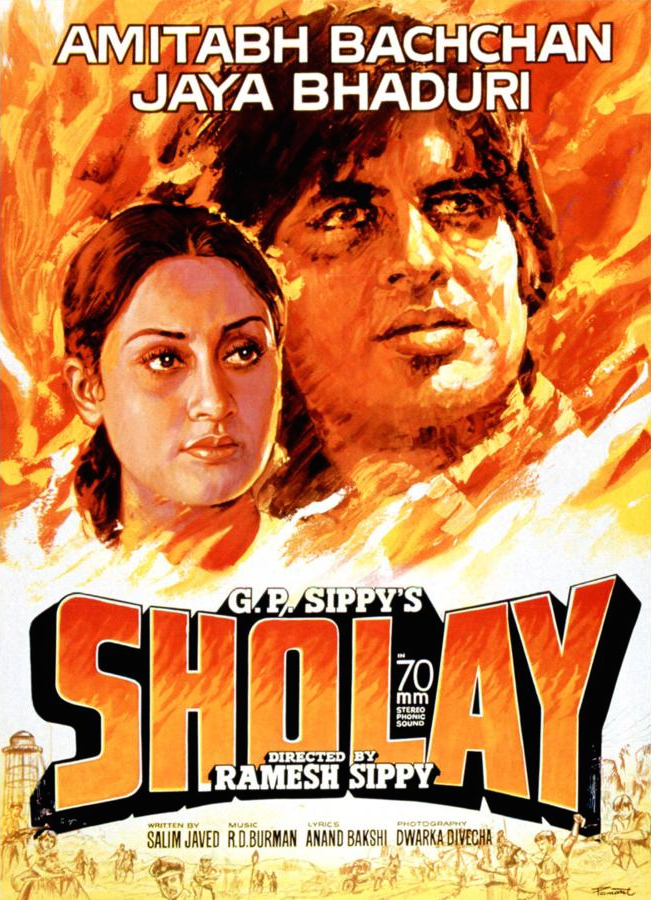 BBC's Rahul Verma explains why "Sholay," the 40-year-old influential Indian blockbuster, may be the "Star Wars" of Bollywood.

Meryl Streep's first known appearance on film was in this crowd of Beatles fans circa 1965. She has no lines, but still manages to steal the show. Perhaps it has something to do with her Oscar-worthy hat.