"Of Unknown Origin: What are We to Make of Those Who Make Us?" At Houstonia Magazine, John Nova Lomax writes movingly about his attempts to understand his mother, an alcoholic, drug addict, shoplifter and otherwise self-destructive person. He was an investigative reporter, yet he'd managed to go his whole adult life without using his skills to learn about the troubled woman who gave birth to him. 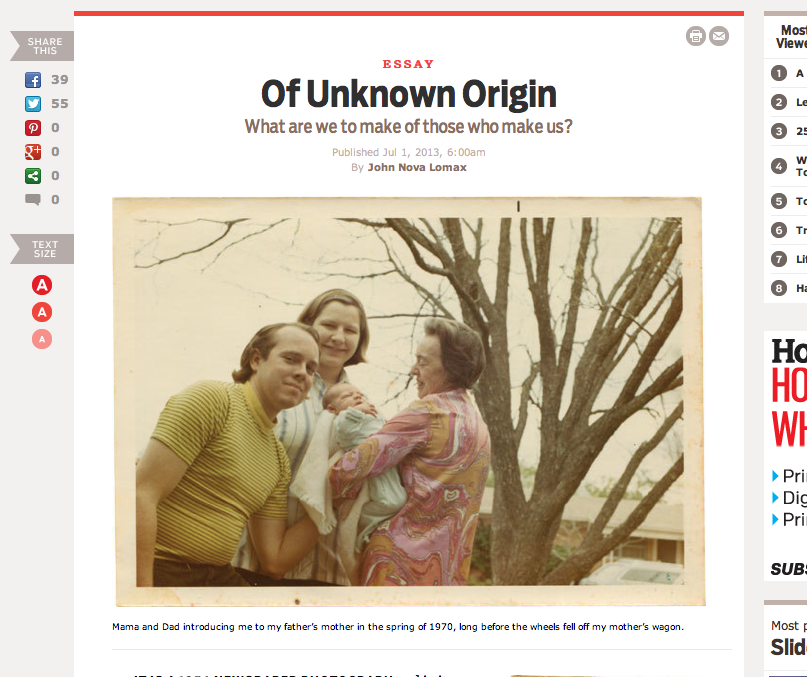 "Over the years, I've had ample opportunity to apply the same investigative techniques on Mama—combing through arrest records, charting her path through the legal system, interviewing dozens of witnesses—that I use on so many others. But for some reason I just didn’t. Then, two years ago, while covering a story about a crooked art gallery, something happened. It was a hot July afternoon and I was at an artist’s opening down on West 19th in the heart of the Heights. There I met a woman named Kerry Jordan who said she’d been a friend of my mother’s. They had gone to Lamar High School together, Jordan explained, and she had something to tell me. Then she changed her mind.
Advertisement

Too much … to handle? I found the idea almost laughable. Not only had my mother been dead for over a dozen years at that point, she’d been a violent, drug-addicted felon. What could be worse?

Jordan took a few more sips of art gallery red and then lowered the boom: Mama had taken LSD regularly while pregnant with me.'" 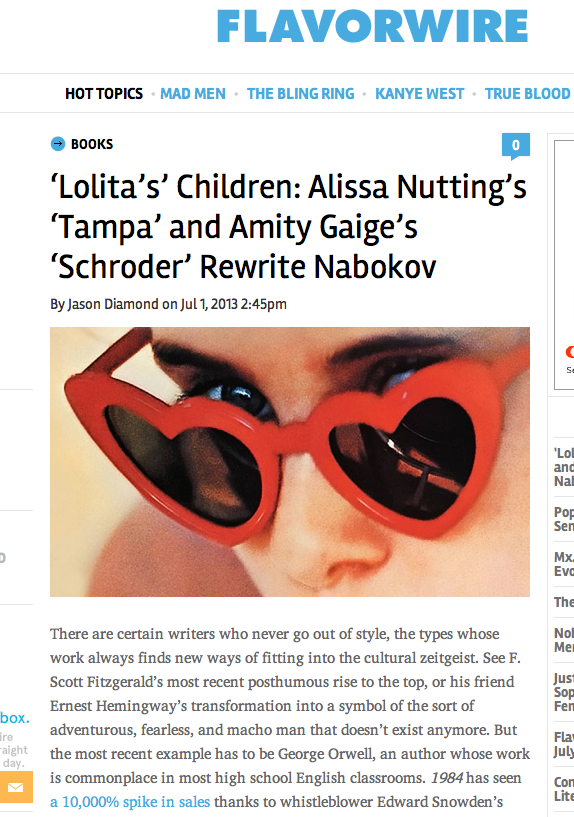 Although obsession is a common theme in literature, these two recent books truly echo Nabokov’s classic. The tribute not only reminds us of why Lolita remains such a great book, but also, in Nutting’s case, how it takes a truly talented writer to weave the child predator into something more complex than a horror show. ...

It’s also notable that these two books were written by women, a potential advantage, because post-Nabokov, it’s difficult to fathom a man writing a book that’s so psychologically close to any sexual predator without getting characterized as a creep. That’s the Lolita dilemma: Nabokov already did it, and Nabokov might be the only male author who was capable of depicting such a touchy and disturbing subject with dazzling results. Both Gaige and Nutting may have used Lolita as a jumping off point for great novels that are both beautifully written and hard to put down, but it’s hard to imagine many other authors who could do the same." 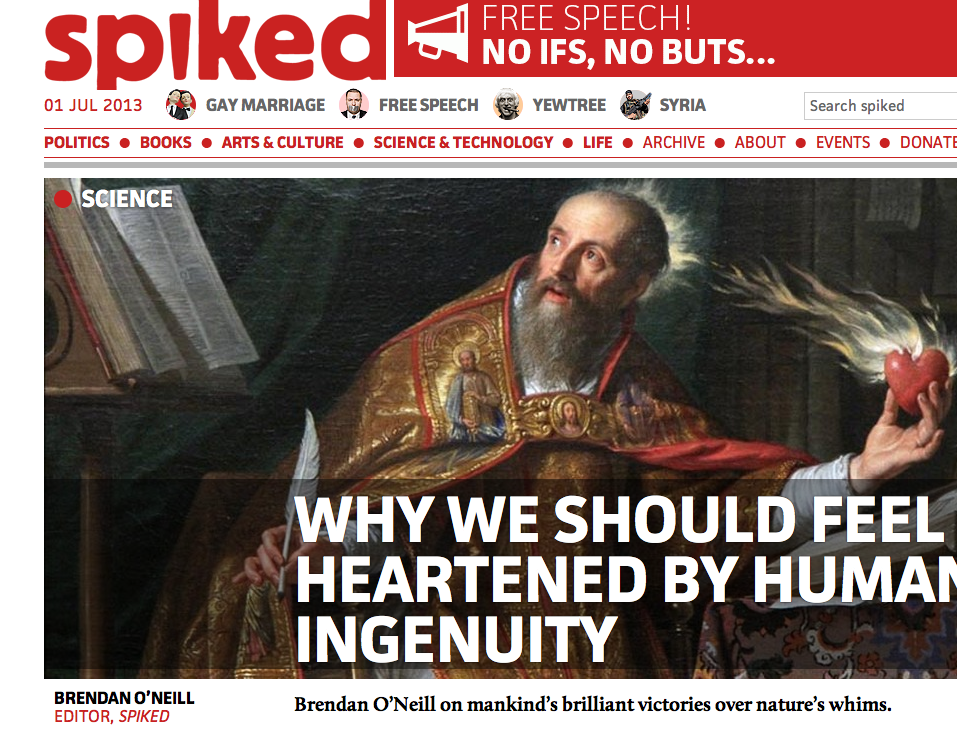 "Why We Should Feel Heartened by Human Ingenuity." Brendan O'Neill, the editor of Spiked, talks about the fact that heart disease has been halved in Europe, and wonders why we aren't more enthused about that.
Advertisement

"Mankind’s creeping victory over heart disease is, ultimately, a story of targeted human endeavour, of scientific and technological discoveries conspiring to do away with one of the major ailments that prevents people from living full, long lives. Anti-smoking moral entrepreneurs, adept at hogging the headlines, insist heart-disease death rates are falling because people are giving up cigarettes. In truth, it’s a combination of medical and technological breakthroughs – from the development of various heart-fortifying drugs to the invention of machines that keep pumping blood around the body during surgery on the heart – that has led to such a dramatic diminution in heart suffering."

"How to Take Care of Your Smartphone Battery the Right Way." By Eric Limer of Gizmodo. If you use a smartphone, you should read this. 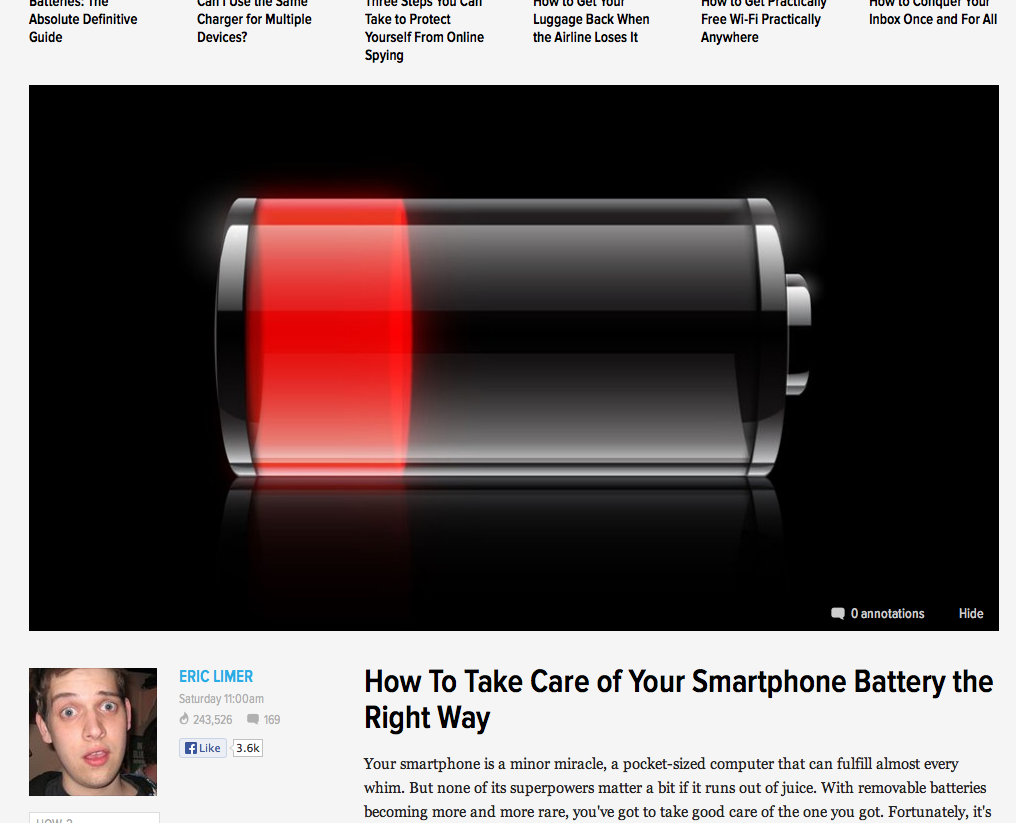 "To get the most out of a lithium-ion battery, you should try to keep it north of 50 percent as much as possible. For the most part going from all the way full to all the way empty won't help; in fact, it'll do a little damage if you do it too often. That said, it's smart to do one full discharge about once a month for "calibration," but don't do it all the time. Running the whole gamut on a regular basis won't make your battery explode or anything, but it will shorten its lifespan."

For Sundance Now, Nick Pinkerton on actress Elizabeth Hartman, who was in a few "best-kept-secret"-type films in the 1960s, and whose warm, inviting voice enhanced The Secret of N.I.M.H. This is Part 1, by the way; Part 2 will be published soon. 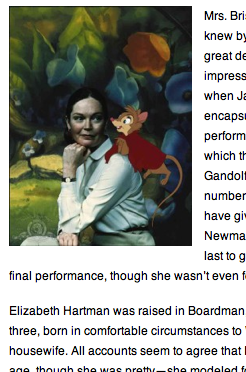 "What really stayed with me after re-watching, though, were the touching and tremulous line readings of the actress voicing Mrs. Brisby, the widow of heroic Jonathan Brisby, a brown field mouse left alone to care for her children. One moment is particularly rending: Mrs. Brisby is hidden behind tall grass, and we cannot see her, but we hear her say in a private voice that is very close to a sob: 'I wish Jonathan were here." Mrs. Brisby’s voice belonged to Elizabeth Hartman, an actor who I knew by then from Don Siegel’s The Beguiled (1971). Now, there is a great deal that goes into a screen performance, but I cannot escape the impression that voice is in many respects an actor’s quintessence—when James Gandolfini died last week, many who were looking to encapsulate the sum total of the loss turned to Gandolfini’s performance in Spike Jonze’s Where the Wild Things Are, a film in which the actor never appears in the flesh, yet a role which epitomized Gandolfini’s combination of looming bulk and disarming vulnerability. A number of great actors, usually prompted by the failing of their bodies, have given their final performances from the recording booth—Paul Newman, Orson Welles, James Stewart—for the famous voice is the last to go. And as it happens, Secret of NIMH was Elizabeth Hartman’s final performance, though she wasn’t even forty when she read her part—but more on that in time." 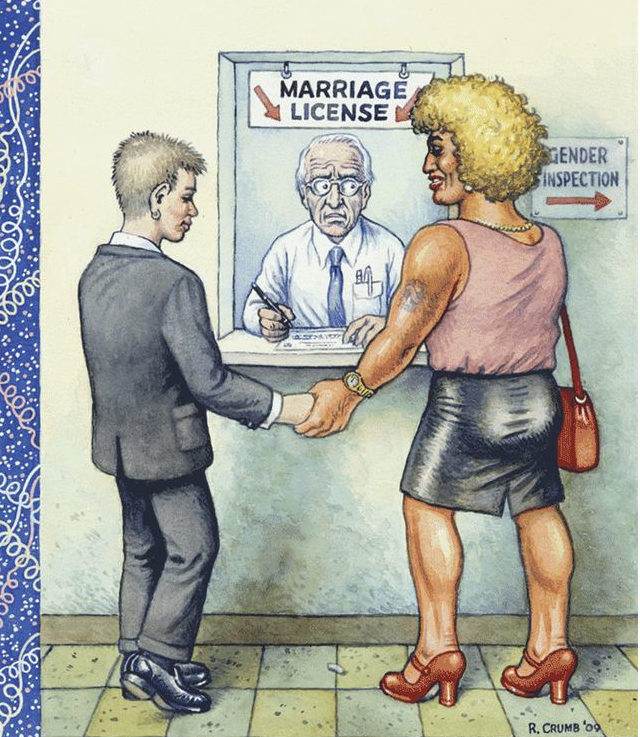 R. Crumb's rejected 2009 New Yorker cover on gay marriage. That the magazine's editor David Remnick never told Crumb exactly why he rejected the cover led the artist to quit contributing there. For the whole story, read Nadja Sayej's interview with Crumb for Vice, "The Gayest Story Ever Told."

The Priest's Children, the fifth film by Vinko Brešan, and Croatia's number-one movie. Mentioned in Vadim Rizov's Film.com article "The Biggest Box-Office Hits of 2013 from Around the World." Read this piece if you want to get a sense of what people in other countries consider popular entertainment. It's quite different from the American standard.