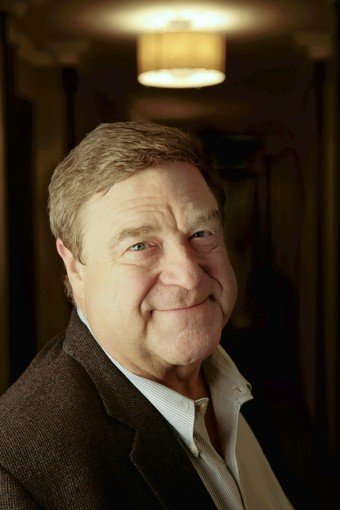 "'People quote it to me all the time,' Goodman says. 'Shomer Shabbos. Shut ... up, Donny. World of pain. You're out of your element. Thank God they've refrained from quoting that scene where I'm screaming at Little Larry while I'm busting up the car.' 'Is this your homework, Larry?' Joel says, chuckling at the line. 'If forced to choose, that's my favorite scene.' Goodman: 'I'm out there tearing up a couple of Corvettes with a crowbar, screaming obscenities in the middle of the night in this tidy neighborhood. I thought, I don't want to do this. But I gotta do it. Nobody bothered to tell me they paid for the whole block to be unoccupied that night.'" 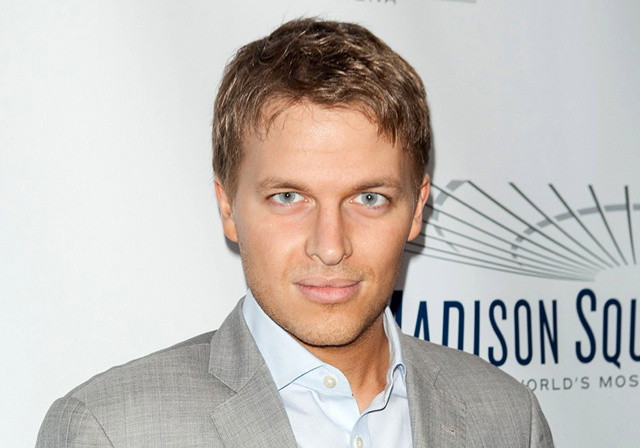 "Does It Matter That Ronan Farrow Is Gay?" For Vice, Christopher Glazek wonders why Mia Farrow's normally outspoken son has remained reticent on the topic of his sexuality--and why mainstream media outlets have respected that silence.

"It's not as obvious to me that Farrow's sexuality needed to be mentioned in the Times profile, though again there's a dog-whistle issue: 'When he wasn’t busy navigating world events, [Farrow] was adding some panache to the Washington social scene, often appearing at political fetes with Jon Lovett, a former Obama speechwriter'; and 'he is guarded about his private life, suggesting a persona more carefully calibrated than he lets on.' OK, maybe that's a little louder than a dog-whistle. It’s possible that the piece’s author, Michael Schulman, who often writes about gay celebrities, couldn't get anyone to verify Farrow's sexuality on the record. Farrow himself didn’t cooperate with the article, so the omission was not part of some brokered deal to get access. According to Google, Lovett is Farrow's long-time boyfriend, though for all I know the situation is more complicated and Farrow and Lovett are in a four-way relationship with an older woman and her female cat. At the height of the AIDS epidemic, when 'silence equaled death,' there were good arguments to be made that staying in the closet was actually killing people and that 'outing' was a moral imperative, despite the havoc it could unleash on someone’s professional life. The stakes today are not as elevated for either individuals, who in most cases don’t have much to lose, or for society at large, which arguably doesn’t have much to gain: the kids will be all right without a Ronan Farrow It Gets Better video. Still, in the context of a profile, sexuality is a pretty big puzzle piece to miss." 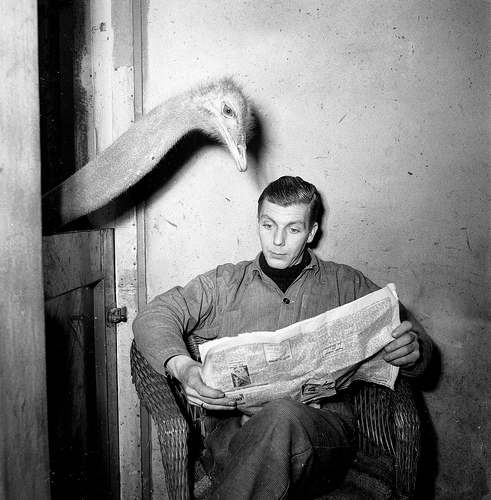 "How Our Minds Mislead Us: The Marvels and Flaws of Our Intuition." For Brainspickings, Marina Popova reviews an essay collection that is a meta-exploration of thought itself: "Thinking: The New Science of Decision-Making, Problem-Solving, and Prediction."

"One of the most fascinating examples of heuristics and biases is what we call intuition — a complex cluster of cognitive processes, sometimes helpful but often misleading. Kahneman notes that thoughts come to mind in one of two ways: Either by orderly computation, which involves a series of stages of remembering rules and then applying them, or by perception, an evolutionary function that allows us to predict outcomes based on what we’re perceiving. (For instance, seeing a woman’s angry face helps us predict the general sentiment and disposition of what she’s about to say.) It is the latter mode that precipitates intuition. Kahneman explains the interplay: 'There is no sharp line between intuition and perception. … Perception is predictive. . . . If you want to understand intuition, it is very useful to understand perception, because so many of the rules that apply to perception apply as well to intuitive thinking. Intuitive thinking is quite different from perception. Intuitive thinking has language. Intuitive thinking has a lot of word knowledge organized in different ways more than mere perception. But some very basic characteristics [of] perception are extended almost directly to intuitive thinking.'" 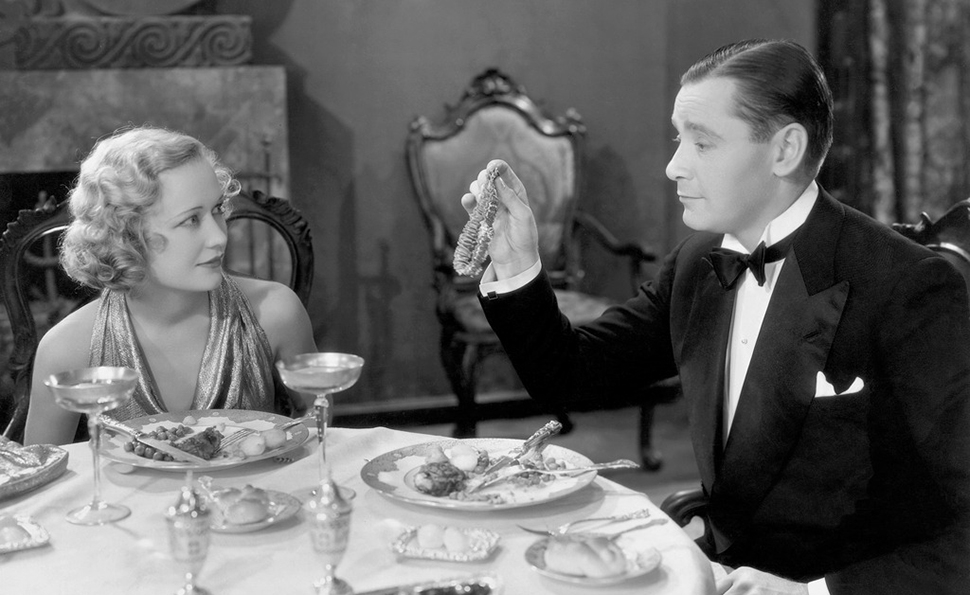 "Ernst Lubitsch’s Charming Pre-Code Transgressions." For The Dissolve, Kim Morgan explores the myriad subversions of the '20s and '30s director.

"From 1929’s innovatively crafted talking musical The Love Parade (Lubitsch’s first sound picture) up to 1934’s Code-rupturing threesome in Design For Living, Lubitsch worked strictly at sophisticated Paramount. (Also released in 1934, The Merry Widow was an MGM picture.) There, he became one of the studio’s top directors, a name audiences remembered just as they would Frank Capra’s—rare for a director at the time. For a brief spell, he was even Paramount’s Head Of Production, which, according to Lubitsch biographer Scott Eyman, was possibly related to the director’s quiet turmoil once Breen took over, and Lubitsch needed to “get out of the line of censorship fire and take some time to figure out what to do.” After all, Lubitsch comedies were about sex, love, joy, and the messy human complications that come from voluptuous adventure. Breen and the Catholic Legion Of Decency held such ardors suspect, a wicked playground for lotharios and trollops. For Lubitsch, a romantic triangle or adultery wasn’t just the side story, it was often the central plot." 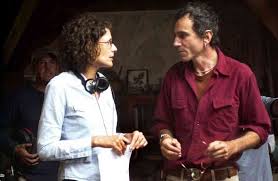 "The casting director is the person who culls the actors and brings the director the best choices for the role, after which the discussion begins and ultimately the director decides–but with much advice from the casting director, whose instinct the director relies on. Cindy Tolan is my long-term casting partner. She is probably my most intimate collaborator. My dread of miscasting is why I walk around with fear in my belly for months when I am trying to cast a film. Each day I try to fight off the senseless lists of actors who “mean something” in terms of their “numbers”. In other words, it is very hard to cast an actor or actress in a lead role who has not been in some kind of hit in Europe, because the investors want to know that even if your film flops here, it will make money over there. Naturally it makes sense that many people go to films because of the stars that are in them, but ultimately the predictions of success are just voodoo. Star vehicles can fail; unknown actors can rise to stardom overnight. That is in part what’s thrilling about casting." 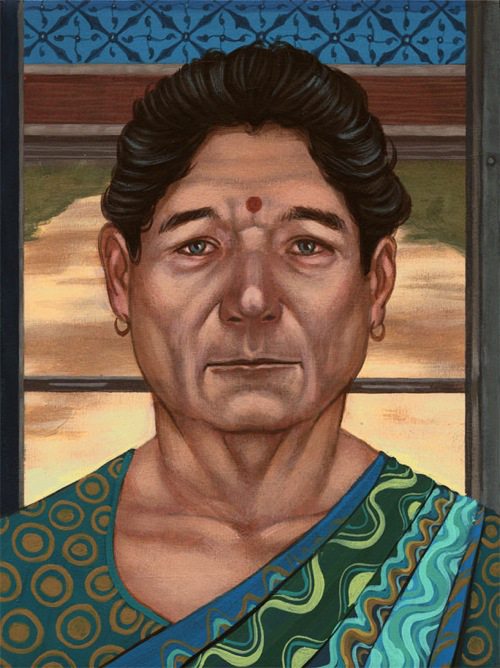 From Casey Weldon's oddly beautiful paintings of Bill Murray as Wes Anderson characters he did not play.