"A few great pumpkins": The team at Reverse Shot recommend a week's worth of Halloween programming including such chilling titles as Georges Franju's "Eyes Without a Face."

“There is obvious tension created here: what’s behind that mask? And before we see the mask, what’s on the other side of that head of luscious, shiny hair? Once we know Christiane’s tale we wonder: Will we ever see the true horror of her disfigurement? We never really do: Franju only allows a glimpse in an out-of-focus close-up. What haunts me the most is not this lack of a terrifying reveal; instead, it’s the film’s final frames, in which Christiane, now convinced that her father’s ever more frantic attempts to save her face will always be doomed to failure, ends her isolation within his clinic. She floats into the cavernous space where the Professor’s dogs are locked up and lets them loose, looking like a graceful, frozen-faced ballerina, or perhaps porcelain doll come to life. The animals run wild and maul the Professor, their tormentor. As Christiane exits the compound we see her from behind, ghastly, arms outstretched, nearly shimmering. She’s free, but she is still ever trapped behind a mask, and this is the last time we will see her. This final image, and all the possibilities it portends, lingers, haunts. Where will this poor, tragic disfigured girl go? We’ll never know.” 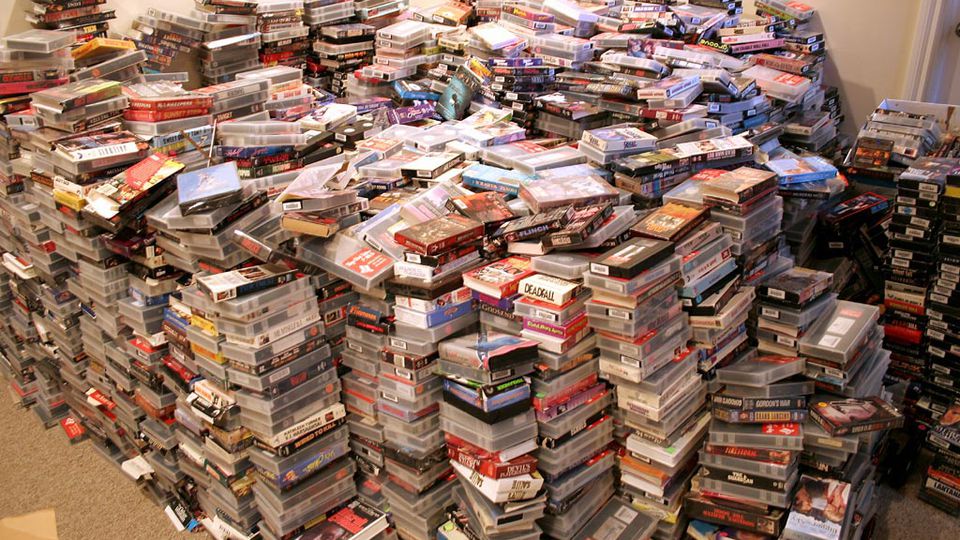 "Direct from video: The rise of the VHS collector": The A.V. Club's Katie Rife writes an excellent piece on VHS horror collectors.

“Chief among these VHS-only oddities is ‘Tales From The Quadead Zone,’ a holy grail of tape collectors, shot on video and self-released by Chicago writer/director Chester Novell Turner. Calling ‘Tales From The Quadead Zone’ ‘underground’ does it a disservice—it’s practically extraterrestrial, a dreamlike experience carried along, barely, through three short ‘Twilight Zone’-style horror stories by a surprisingly catchy synth score and loads of surreal atmosphere. It’s practically impossible to separate a movie like ‘Quadead Zone’ from its context. Without its impossible rarity and bizarre backstory (rumors circulated for years that Turner was dead—rumors disproven only when he started making convention appearances), would this no-budget horror oddity be a cult classic, let alone one whose original, handmade VHS sells for $1,000 on eBay? (To be fair, that auction was to raise money for video store holdout Scarecrow Video, so the price was somewhat inflated.) In the horror VHS world, the trash aesthetic doesn’t make ‘Quadead Zone’ bad. It actually makes it better.” 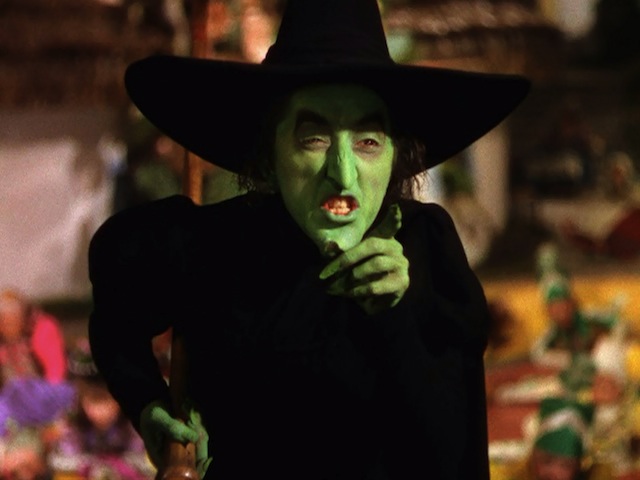 "Top 10 Favorite Witches": From the archives: My 2013 list at Indie Outlook ranking the ten most entertaining witches from film, TV, theatre, literature and—in one case—real life. Seriously, who can resist The Wicked Witch of the West from 1939's "The Wizard of Oz"?

“Every kid has at one point encountered a stranger who might very well be a witch. It could be the cranky neighbor next door or the grim teacher who makes every class pure torture (for me, it was a substitute teacher who threatened to smack me with her yardstick). Beneath such vindictive behavior often lies tragedy, and the most influential witch in movie history is no exception. Played with extraordinary relish by former kindergarten teacher Margaret Hamilton, the witch appears at the surface to be a straightforward villain, complete with a green face, hooked nose and pointy hat. Yet in a way, she’s as much a victim as Dorothy. Reeling from the death of her sister, the Witch is determined to retrieve her late sibling’s shoes stolen by Glinda, an alleged ‘good witch’ who makes patronizing comments like ‘only bad witches are ugly.’ No wonder everyone from John Waters to the writers of ‘Wicked’ have sided with Ms. Hamilton.” 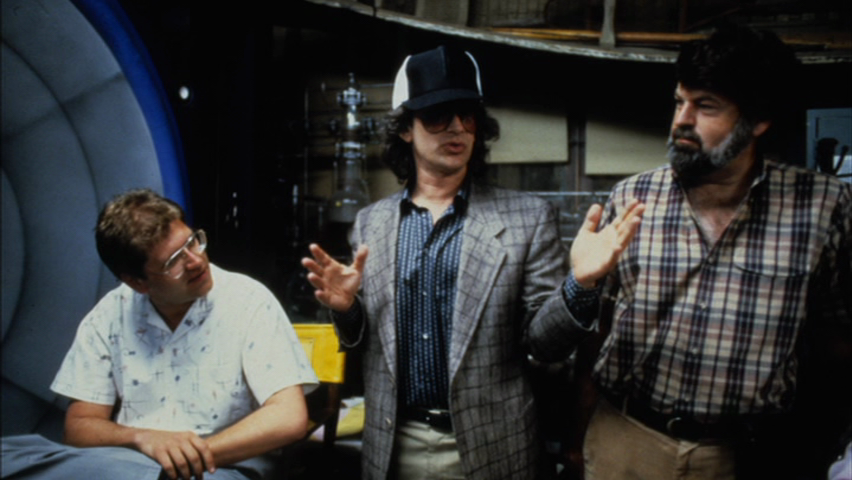 "'Back to the Future' Wouldn't Have Been the Same Without Spielberg": Screenwriter Bob Gale chats with ShortList.com about his larger-than-life collaborator.

“No studio wanted to make ‘Back To The Future’ until Bob had a hit with ‘Romancing The Stone.’ Then everyone wanted to make it, but we took it to Steven and the timing couldn't have been better - he’d just made ‘E.T.’ and was setting up Amblin Entertainment. He told us ‘Back To The Future’ would be Amblin’s first production, and it helped that Steven was behind us because he protected us against the studio, Universal. During filming we had one executive keep asking us to change the title to ‘Spaceman From Pluto,’ a reference to the comic seen in the barn, which we ignored. Eventually he became to adament of changing the movie title he sent us a memo about it. Unsure how to handle it, we took the memo to Steven, who told us ‘Don’t worry, I know how to handle him,’ before writing a letter back which said, ‘Hi Sid, thanks for your most humorous memo, we all got a big laugh out of it, keep ‘em coming.’ Steven knew he would too embarrassed to say that he wanted us to take the letter seriously. Luckily nobody questioned the title after that. Without Steven, it could have all been very different.” 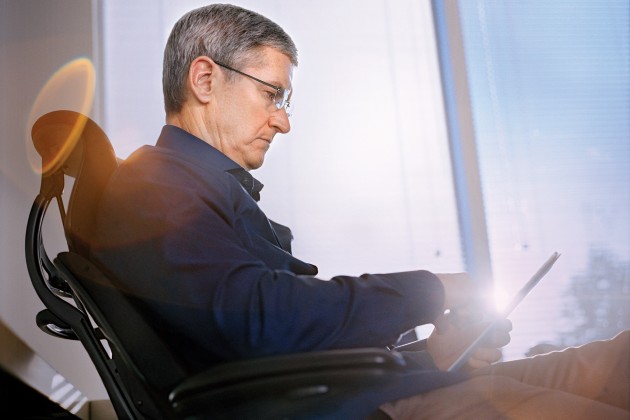 "Tim Cook Speaks Up": The CEO of Apple tells Bloomberg Businessweek that he's proud to by gay.

“Being gay has given me a deeper understanding of what it means to be in the minority and provided a window into the challenges that people in other minority groups deal with every day. It’s made me more empathetic, which has led to a richer life. It’s been tough and uncomfortable at times, but it has given me the confidence to be myself, to follow my own path, and to rise above adversity and bigotry. It’s also given me the skin of a rhinoceros, which comes in handy when you’re the CEO of Apple. The world has changed so much since I was a kid. America is moving toward marriage equality, and the public figures who have bravely come out have helped change perceptions and made our culture more tolerant. Still, there are laws on the books in a majority of states that allow employers to fire people based solely on their sexual orientation. There are many places where landlords can evict tenants for being gay, or where we can be barred from visiting sick partners and sharing in their legacies. Countless people, particularly kids, face fear and abuse every day because of their sexual orientation. I don’t consider myself an activist, but I realize how much I’ve benefited from the sacrifice of others. So if hearing that the CEO of Apple is gay can help someone struggling to come to terms with who he or she is, or bring comfort to anyone who feels alone, or inspire people to insist on their equality, then it’s worth the trade-off with my own privacy.”