The Depths of What We Cannot Know: On "The Double Life of Véronique"

I see a woman. She’s walking in the late afternoon amber-green light of a college town. She makes films. She’s lived in New York and Chicago. She’s traveled all over the world. She wears her hair long. This woman is me. This is the me who finished college and went on to build a life of her own. I sense her every so often, an uncanny feeling where I’m certain she exists in the material plane. Right at this moment she is walking to keep an appointment. Few films have captured that feeling so well as Krzysztof Kieślowski’s “The Double Life of Véronique,” a beguiling film turning twenty-five this year. It’s a film resistant to pinning down, slippery and sensuous as water in its images. But its text is a thrilling, numinous reading of how the choices we make, and paths we don’t go down, can literally haunt us as specters of lives not lived.

Véronique (Irène Jacob) is a French woman on vacation in Warsaw. She unknowingly takes a photo of her Polish double Weronika (also Jacob). Weronika spots Véronique on the bus and has only a few moments to stare in wonder as the bus drives away. Weronika prepares for an important debut as a singer. As she opens her mouth to sing, she collapses and dies from a heart condition. At that moment Veronique strangely finds herself in tears after sex with her current lover. She tries to explain to her partner that she just had the sense of suddenly being all alone in the world. That existential ache, of losing a part you didn’t know you needed, hangs over the rest of the film. 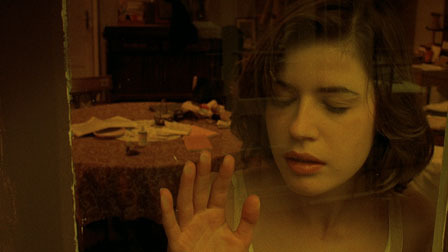 The yearning for finding that missing part will lead Véronique into a relationship with a puppeteer. She first notices his reflection from behind the curtain as he performs a show for the school at which Véronique. The film subtly offers a warning on falling in love with an image as Véronique is drawn into a series of tests and games the man arranges, not for love, but for a curiosity that flatters itself as love. It’s only towards the end, and crucially after spotting Weronika in her contact sheets from Warsaw, that Véronique realizes this. The man she thinks she loves views her as raw material for the stories he creates. She won’t find that missing piece in him. And she won’t find that grand golden thread that connects everything and everyone and reveals the great pattern behind the universe. Life remains frustratingly elusive in its meaning.

It’s easy to read the political shadings of the film. In the newly reunited Europe a protest in a square in Warsaw is cause for a fluttering of tourists taking photos instead of fear. There is still a hesitancy in the Polish characters not to say too much, reveal too much, because you never know who might be listening. There’s the wrenching question that transcends the political into the agonizingly personal with the fate of Weronika. That for a new self—a new Europe—to live, must the old self die? Is Weronika no longer necessary to the new world order? Véronique seems to understand this terrible dilemma on some unconscious level when she discovers the images of Weronika on her contact sheets. 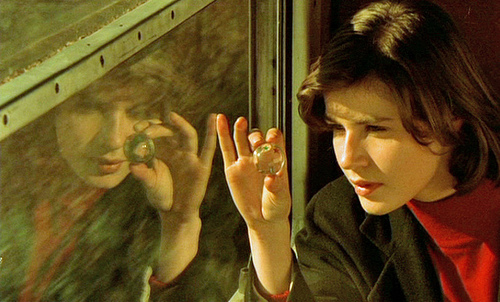 Jacob is excellent in the dual roles—a pair of performances whose effect lingers with the viewer long after. Weronika’s gestures are that of a sheltered young girl giddily bursting into a womanhood that will be cruelly cut short. Véronique is the French sophisticate, careful, perhaps too careful with herself. There’s a gallery of fine supporting players. Wonderful faces who show the history of 20th century Europe in their lines. In the warmth their smiles shine on the two women. In the shadows of their eyes as they warn of the pitfalls love surrounds itself with.

The film shimmers with golden light and shudders in emerald green shadows. Cinematographer Slawomir Idziak shoots Jacob as if she has the glowing skin of a painting. Rooms are lit and dressed to resemble lacquer jewelry boxes more than bedrooms. And always the color red: in Véronique’s gloves, in Weronika’s sweater, tying the two together. The color choice is open to multiple meanings; red for the heart, as both women share heart troubles that are fatal in Weronika’s case. Red for passion, and red to say "stop, go no further."

It’s in the depths of what we cannot know, or at least not know for certain that the film retains its pull over two decades later. It seems to be telling a slightly different story every time I catch up with it. It’s a ghost story, a drama, a modern fairy tale. It’s about how who we were both fades into shadow and haunts our every step. It’s about how women have to guard ourselves so as not to end up a plaything in a man’s psychodrama. And it’s about how the sorrow of something passing away is inseparable from the joy of something new being born. I think again of the woman with the long hair, the other me. It’s often a thorn prick to think too much of her. And yet I know I haunt her as much as she does me. And that we share an obsession with this film. And that’s just right. “The Double Life of Veronique” is a masterpiece. One for all of the selves we carry.