The Cokey Comedies of the Silent Screen Era

The peculiar, intoxicating qualities of the coca leaf were first discovered by Europeans around 1569 when the Spaniards landed in South America. The cocaine alkaloid was first isolated around 1855.  Shortly thereafter, it began being utilized within the medical community in various ways—as an anesthesia, as a pain suppressant, and as a weight loss assistant. Freud was an early fan of the drug; he sang its praises in an article he published in 1884.

Soon after, cocaine began to be sold commercially. Quite famously it was in Coca-Cola in 1886. Around this same time, it was also being marketed as everything from a toothache remedy (for children!) to a hair care product. Recreational use of the drug took off from there. By the late 1880’s and early 1890’s, cocaine was being sold over the counter as either a pleasurable additive to cigarettes or in a more pure and immediate powdered form.

America’s “snowstorm” didn’t last long. Though cocaine would not be made illegal for non-medical purposes (on a federal level) until 1922, by that time, it was already falling out of favor. Coca-Cola removed it from their recipe in 1906. Articles about the dangers and addictive powers of the drug began appearing in newspapers even earlier, around 1890.

Nevertheless, despite these warnings, cocaine remained, to many, either a miracle cure or a harmless vice.

And if cocaine—in one form or another—was being widely used all over the country, what was going on with it at this time in Hollywood, within the nascent but already decadent-leaning community of silent film-making? Certainly it was no secret that, as in later decades, Hollywood even at that time was already awash in many dangerous and addictive chemicals. According to author Andy Edmonds, writing about the early movie colony, “Cocaine was as common as aspirin and major stars blew their fortunes on thousand-dollar-a-week cocaine habits.” 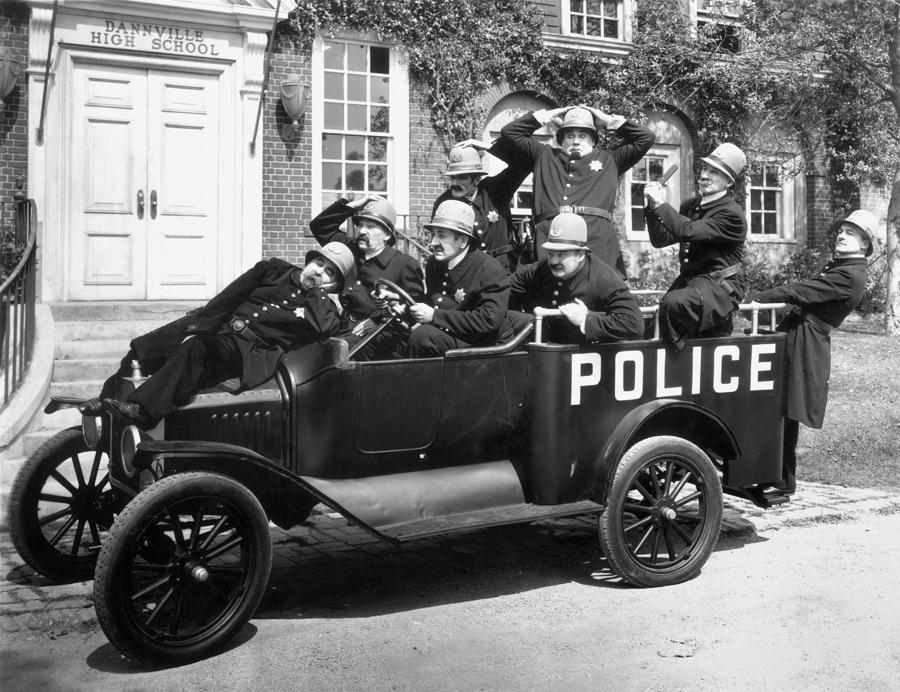 It’s long been rumored that the manic antics of the Keystone Kops was inspired by the hyped-up energy caused by cocaine. There is a theory afloat that the Kops themselves might have shot themselves up right before the cameras rolled in order to deliver the energy needed for their more madcap scenes. Mack Sennett himself was rumored to have partaken of the powder from time to time as well, at least according to some associates of his who could never fully explain his seemingly boundless energy or his often erratic mood swings. And Sennett star Fatty Arbuckle also heavily indulged throughout his career as did major silent star Norma Talmadge who died addicted to the stuff.

But Sennett and his Kops weren’t the only ones. The so-called “joy powder” (or other illicit drugs) of the era was popular with many performers. Sadly, its rampant use either resulted in or helped hasten many of their early deaths. Olive Thomas, who died at age 25, began the hecatomb. She was a former model and Ziegfeld Girl and silent film actress who was married to Mary Pickford’s brother Jack. Olive and Jack lived a short, scandalous life before her unexpected death in a hotel room in Paris in 1925, probably, from a drug overdose.

Actor Wallace Reid had been featured in “The Birth of a Nation” and “Intolerance,” before being injured on the set of a film in 1919. Prescribed morphine for his pain, he eventually became severely addicted to the drug and died, addicted and in a sanitarium, in 1923.

Actress Barbara LaMarr—known in the press the “Girl Who Was Too Beautiful”—died at age 29 by which time she was already married to her fifth husband. LaMarr at one time or other had been addicted to cocaine, heroin and alcohol. She died in 1926.

Lovely actress Alma Rubens battled cocaine, heroin and morphine addiction throughout her 14-year career before she died in 1931.

The silent screen’s most famous comedienne, Mabel Normand, was cocaine-dependent during some of her career but was rumored to have been clean by the time of her death in 1931.

Finally, Olive Thomas’s widower, Jack Pickford, continued to abuse drugs and alcohol even after his wife’s death. He passed away, from complications from drink, in 1933.

One of the few known survivors of a major addiction was silent star Juanita Hansen who battled coke and morphine dependency until getting clean in 1934. She later became an advocate for drug recovery and treatment programs. She lived until 1961.

With drug use and abuse being so rampant in Hollywood at that time, today, we are even aware of some of the film community’s biggest drug suppliers. Leading the pack was the so-called “The Count” (rumored to be silent film actor and later screenwriter Hughey Fay) who kept Sennett employees well supplied with smack. Another well-known dealer was nicknamed “Captain Spalding.” He mainly provided for the Famous Players-Lasky lot until he finally got busted by the LAPD. Legend has it that studio boss Adolf Zukor either bailed him out or paid off the cops to keep the Captain from naming names after his arrest.

With drug use so prevalent in the film colony at this time, it stands to reason that hints of it would slowly find its way into their onscreen product. And it did. Furthermore, unlike the “behind-the-scenes” or under the table usage of cocaine that might or might not have inspired the Kops of Keystone, cocaine use in other films is plainly and openly showcased. For example…

Almost nothing you have ever seen before prepares you for the 1916, now infamous Douglas Fairbanks film “The Mystery of the Leaping Fish.” In the supposed send-up of Sherlock Holmes, Fairbanks plays a private eye with the not-so-coincidental name of Coke Ennyday. And the film’s lack of subtlety doesn’t end there. On-screen, the character wears a belt fitted with syringes for his easy access. He sits at a desk where a wooden bowl is plainly, largely labeled “Cocaine” and a clock in the back of his office has the word “dope” where the number 12 should be. Nearly from the first frame of the movie, Ennyday is seen shooting up.

But, believe it or not, “Leaping Fish” is not alone. In 1918, there was the film “Playmates.” It starred Billy West and Charlie Chase. In this comedy, according to a Chase biography, Chase “played a homosexual drug addict (with a seemingly inexhaustible supply of cocaine)….  Billy plays the reformer, convincing Chase to give up his evil ways. Chase throws the drugs away—and Billy retrieves them for himself.”

Two years later, in the comedy “Get Out and Get Under,” Harold Lloyd is out for a drive when his jalopy suddenly peters out. Observing an itchy man slumped in a nearby doorway shooting something into his hand, Lloyd casually saunters up to the man and asks him for a light. Smoothly, he pickpockets the man’s works from his jacket. Heading to his car, Lloyd pours the contents of the stolen case into his gas tank. Soon, the auto is not only running, it’s jumping! Eventually, the car is so souped up, it drives off without him.

In another 1920 comedy, “The Flying Cop,” silent comic Larry Semon is seen ingesting cocaine. He then literally floats across the room and becomes impervious to pain.

It also wasn’t just cocaine that made its way into silent films. Chaplin takes morphine in “Easy Street” (1917) and Harry Langdon succumbs to the effects of opium smoke in both “Hansom Cabman” and “Feet of Mud” (both 1924). (Chaplin would later do coke though—“accidentally” —in the film “Modern Times” from 1936.)

A few silent film scholars believe that these films are enough to constitute a subgenre—the “cokey comedy” or “cokie comedies” and that they are, with their playful, casual reference to drug use, to 1910’s and ‘20’s what the pot-infused, Cheech and Chong-style movies of the ‘70’s were to that later decade.

With experts estimating that a much as 70% of all American-produced silent films have been lost, the survival of these drug-infused films suggests that there were, perhaps, plenty more “cokey comedies” at one time playing American theaters from coast to coast.

To be fair, however, not all silent films, when they chose to address issues of pharmacology, portrayed it with such utter irreverence. In 1912, D.W. Griffith directed Blanche Sweet in the film “For His Son.” In this drama, clearly inspired by Coca-Cola’s history, a man invents a soft drink laced with cocaine (and called “Dopocoke” in the film) in order to earn enough money to insure his son’s future. Unfortunately, his son ends up hopelessly addicted to his father’s creation. In 1915, “Black Fear” was a morality tale in the “Reefer Madness” mode about an evil boss who forces the powder on his unsuspecting young employees. It was followed by the similarly pedantic “The Devil’s Needle” in 1916 (which, ironically, starred real-life addict Norma Talmadge). Then, in 1923, after the death of Wallace Reid, his widow, Dorothy Davenport, produced “Human Wreckage,” an anti-drug movie so graphic for its time it ended being banned from being shown in England.

As shocking as the content and depictions in some of these so-called “cokey comedies” might be to modern eyes, we must bear in mind that at the time the majority of them were produced, even if cocaine was already suspect, it was still legal. Nevertheless, the off-handed way that it was portrayed forever uniquely colors this black-and-white time period.