The Alliance of Women Film Journalists: The First Ten Years

The Alliance of Women Film Journalists (AWFJ) celebrates its tenth anniversary this year. This is a good time to take stock of the organization’s accomplishments and look to future goals.

AWFJ was formed in response to a need. Four founding members—Jenny Halper, Joanna Langfield, Maitland McDonagh and I—shared concerns about the disparity in opportunity and recognition for women film critics and feature writers. We were equally dismayed by the dearth of female-directed films and the pernicious stereotyping of female characters in mainstream Hollywood productions.

In recalling conversations that precipitated the founding of AWFJ, Maitland McDonagh notes, “I was very aware that there was an undue level of interest about what I, as a female critic working in visual media, look like. Comments made about my hair and what I was wearing were completely inappropriate—like critiques of actresses based on their appearance rather than their performance. There was also a prevalent assumption that women critics have more emotional responses to films, and are incapable of analytical thought. That’s just plain wrong. Gushing fanboys—whether they’re women or men—have their place in the film universe, but most women who write about film are not fanboys. We bring serious consideration and unique perspectives to our commentaries. We deserve to be heard and taken seriously.”

AWFJ founders’ meetings were intimate and inspiring. "Conceiving and developing AWFJ was, for me, a real labor of love in its best sense,” says Joanna Langfield. “We were acutely aware of the lack of support for and attention to the female minority of critics and film journalists. We wanted to build a haven for the global collection of professionals out there, fighting the good fight. Time and economics have impacted the group, as would be expected. But the intent remains strong: a place for enhancement and camaraderie, along with a good old dose of fun".

Jenny Halper adds, “We had the idea that forming a support group, a community of professional women film critics and features writers would raise the volume on the voices of female critics and push forward better representation of women in film. We were, in fact, a very early manifestation of the current feminist trend in film.”

For my part, I was deeply concerned about how the male-dominated movie industry was and is impacting social and political realities. As I saw it—and still do—movie theaters are modern day classrooms where audiences—youngsters of all ages—learn how to behave in arenas ranging from the bedroom to the battlefield, and where they form their standards for and expectations about life. I, as a woman film critic who is concerned about the future of our planet and our species, don’t agree with many of the teachings delivered via big screens and small, and have found similar concerns—explicit or not—among female colleagues. I wanted to support women’s perspectives and make sure we always have a viable platform for expressing them.

AWFJ was born of the founders’ collective concerns, and quickly embraced others expressed by women who joined the organization in its early days. Our corporation’s mission statement reflects the range of our concerns and goals. These have evolved over the years in response to specific industry developments, popular trends and the ongoing input of AWFJ’s membership. But our core credo has remained the same: AWFJ raises public awareness about women’s accomplishments in film by assuring that the voices of women writing about film be heard and their perspectives fully recognized and respected, by supporting women who are working in the film industry behind and in front of the cameras, and by demanding that complex female characters be given equal opportunity and representation in cinema storytelling.

AWFJ’s credo is our core attraction for members. “When I joined AWFJ years ago, I felt it important to support an organization that drew attention to the work of women film journalists and its importance, and I loved the idea of giving out awards that reflect women’s perspectives and honor women filmmakers,” recalls Anne Thompson.

Ten years of proactivity have established the AWFJ brand. Looking back, we’ve accomplished quite a lot. 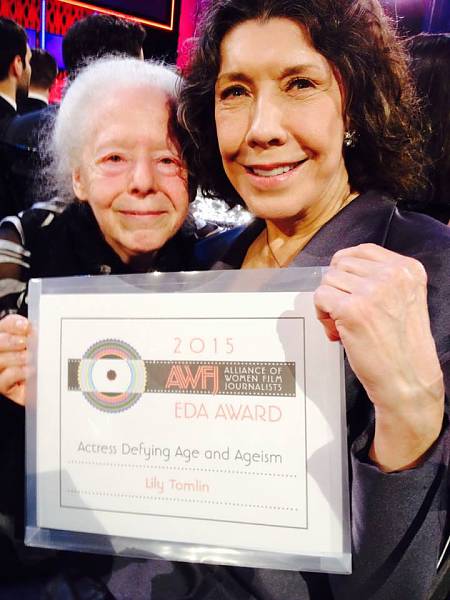 The organization is well known for our distinctive AWFJ EDA Awards. Presented annually during awards season, the EDA Awards recognize outstanding achievement in all the standard categories, but add special Female Focus awards and Special Awards, including our quirky “Best Nudity,” “Actress Best Defying Ageism” and “Actress Most In Need of a New Agent” categories, all of which garner extensive media coverage.

As AWFJ member Nell Minow puts it, “What’s important about our EDA Awards is that we bring a unique perspective in honoring the wonderful work that’s done by women in film and that we weigh in on sexism that arises from ongoing male dominance in the film industry, especially as it pertains to women’s images on film.”

“What I like about our festival awards is that we get to watch new films by talented but relatively unknown women filmmakers and we know that our recognition of them will help them be seen by the wider audiences they deserve. This is exciting and it makes volunteering for AWFJ jury duty a privilege and a pleasure,” says AWFJ member (and frequent juror) Susan Wloszczyna.

On a personal note, I must acknowledge my gratitude to my AWFJ colleagues for naming the EDA Awards after my mother, Eda Reiss Merin, an actress and activist who was one of the founders of AFTRA, a member of AMPAS, starred opposite Sir Charles Laughton in the original production of Bertoldt Brecht’s “Galileo” and played the Babysitter from Hell (her description) in “Don’t Tell Mom The Babysitter’s Dead.” Eda’s legacy is large.

AWFJ’s official Website (AWFJ.org) is a lively and well-trafficked communications hub that serves as an ongoing platform for members and guest commentators, and offers updates about the organization’s doings. The site’s core intention is to assure that AWFJ members who lose their regular jobs and/or platforms—an ongoing and growing problem—have a place to continue their work. We aggregate members’ reviews, interviews and commentaries (as they are sent to us), making AWFJ.org a focal point for researching women’s perspectives on film.

AWFJ.org features our Movie of the Week, drawing attention to what we think is the week’s most interesting opener, and our monthly SPOTLIGHT, which focuses on one woman’s noteworthy achievements in film. Built and maintained by AWFJ member MaryAnn Johanson, AWFJ.org now has six individual blogs, including Brandy McDonnell’s The Week in Women, Liz Whittemore’s I Scream You Scream, Martha Nochimson’s Eye on Media and my Cinema Citizen, as well as Awards Intelligencer (on hiatus until this year’s awards season begins) and The Female Gaze, which is open for guest posts and is tied to the AWFJ-administrated The Female Gaze Forum on Facebook. All work on the site is currently done on a volunteer basis. We hope to eventually transform our website into one that pays for original content.

AWFJ’s 100 Best Films list was published in 2007 in response to AFI’s 100 Best Films list, which included just 4.5 female directors. The numbers are very different on our annotated list, which recognizes many fine female directors who were excluded from the AFI list. Initiated by AWFJ member Carrie Rickey and written by a consortium of colleagues including Susan Wloszczyna, Carol Cling, Lexi Feinberg, Marcy Dermansky and others, the AWFJ list is a great resource for movie lovers who want to see what women applaud and what women have accomplished in film. This year, AWFJ member Marilyn Ferdinand is heading up our project to publish AWFJ’s list of Best Fictional Female Characters. The publication date is TBD.

During the past ten years, AWFJ has also hosted screenings of films by and about women, presented and served on panels at film festivals and other events, expanded our membership base to include women film journalists in Canada and the UK, mentored young women film journalists and offered them publishing opportunities, forged alliances with other groups concerned about disparities pertaining to women and film and raised awareness within the industry and in the public arena about the need for change. Last, but certainly not least, we’ve supported AWFJ members who’ve been forced by the protraction of film critics’ jobs to transition from longstanding print, broadcast and online positions to freelance work.

Every year, AWFJ invites several film journalists to join the organization. We include a mix of well-established names and relative newcomers who show promise in collaborating with us to reach our goals.

AWFJ member Thelma Adams sums up the organization’s purpose and impact, “The issue of women in Hollywood is currently trending in the news: Reese Witherspoon discusses the dearth of women directors with Entertainment Weekly and Chris Rock jokes about discrimination against women at the Oscars. AWFJ has been and is on the cutting edge in raising awareness of the disparity issues. But our work as film journalists is far from done—particularly because women still are only 20 percent of the movie critics out there. It has been individual women, particularly critics, who have been pushing this particular rock uphill for decades. Central to this effort has been the AWFJ, now celebrating its 10th anniversary, a group that has raised awareness of bias against women in Hollywood and helped unify those lone voices speaking in the wilderness into a broad and recognized movement for change in the industry.”

Excelsior! Here’s to another ten years of progress.

Jennifer Merin is the film critic for Women's eNews. She is president of the Alliance of Women Film Journalists and edits AWFJ's website.