Showtime Gets Behind Closed Doors with "Masters of Sex"

The premiere episode of "Masters of Sex," directed by the Oscar-nominated John Madden ("Shakespeare in Love"), opens with a tone-setting but subtle image—a finger running around the rim of a water glass. It's an image that engages the senses: We can relate to the touch and the sound it creates. "Masters of Sex" is about a man and a woman who tried to explore the scientific understanding of relatable but often-secretive senses—those stimulated during sex.

The names Masters & Johnson are now known around the world but these two were once challenged in their efforts to explore something everyone did but no one talked about. As Masters says in the premiere, "There are libraries on how babies are born and not a single study on how babies are made." "Masters of Sex" is not just about how babies are made physically but the many other entanglements that get tied up in the act of baby-making including marital complications, societal expectations, and, perhaps the most scientifically unquantifiable element in the world, human emotion. With incredibly strong central performances and one of the most thematically dense subject matters to explore of the new season, "Masters of Sex" serves as a nice partner to Showtime's returning "Homeland," providing two hours of intelligent adult drama on Sunday nights. 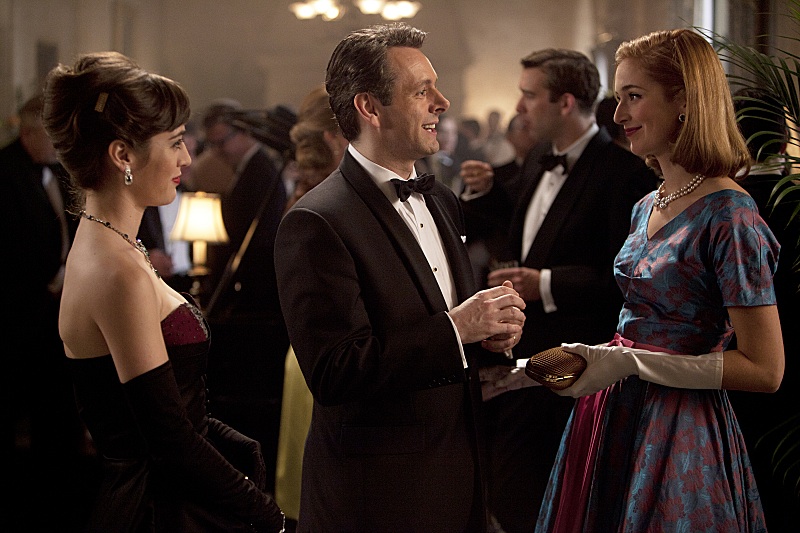 It is October 1956 and Dr. William Masters (Michael Sheen) is one of the most notable OB/GYNs in the world. He has put the respected Washington University on the map with his work with infertility, even if he says a prayer every night before sex with his wife Libby (Caitlin Fitzgerald) as the two struggle to conceive their own child. Dr. Masters has been quietly developing a new study that he hopes his Provost, Barton Scully (Beau Bridges), will approve for funding. What exactly happens to the human body during the moment of orgasm? Why would a woman fake climax? Why are there social stigmas around certain sex acts but not others? And why are the rules different for men than for women? 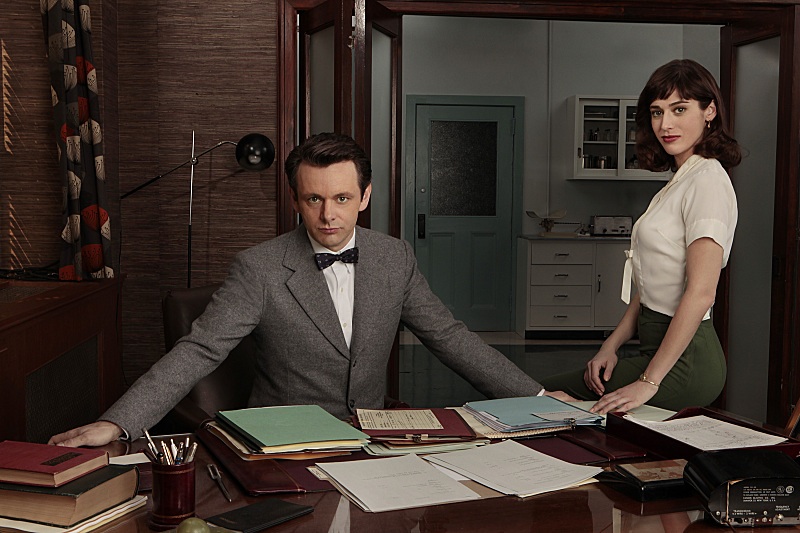 Dr. Masters quickly learns that not only does his gender force some women to be less than honest with him but that his clinical approach won't always get to the answer to the questions he wants to ask. And so he looks for a partner. He finds a perfect one in the new office assistant, Virginia Johnson (Lizzy Caplan). She not only puts his subjects at ease but also serves as an example of the sexual future, quickly sleeping with Masters' colleague Dr. Haas (Nicholas D'Agosto) without the common strings of relationship. She tells him that they're just friends; he wants to get married. Johnson represents a future freedom of not just sexuality but discussion and exploration of what is so commonly thought shameful. Masters & Johnson's study, if it works, could not only address the science of sex but level the playing field in terms of gender roles and sexuality. 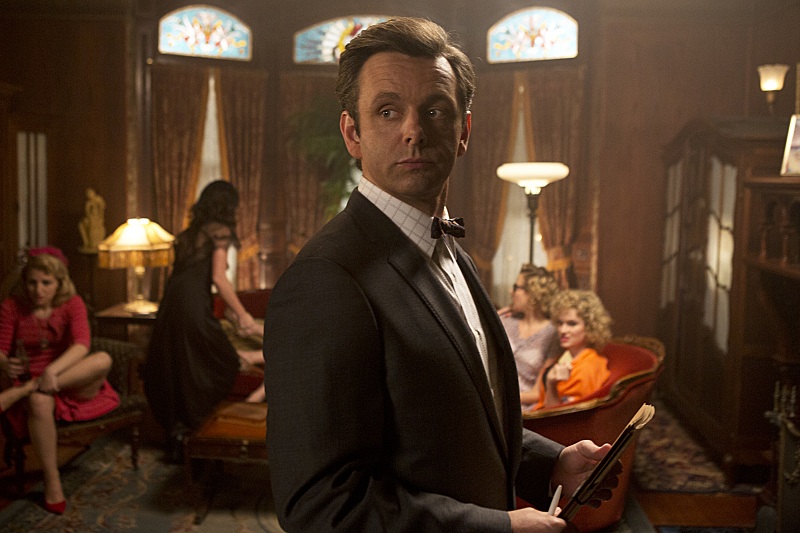 Creator Michelle Ashford ("John Adams") presents the great Michael Sheen with a fascinatingly complex character in Dr. William Masters and he delivers. Masters is determined to a fault, the kind of guy who interviews a subject for his study rather than stay in the room with his wife while she undergoes fertility treatment. He often fails to see the emotional and social issues at play in what he's discussing or attempting to dissect. His science can measure the intensity of an orgasm on the body but what can it possibly say about the heartbreak of infidelity, the pain of jealousy, etc.? Masters knows he's doing something important, commenting on the importance of "the light of scientific inquiry," but he's too smug to do it on his own. Sheen very carefully portrays Masters as the more clinical half of the pair while Caplan captures the more human partner without either performer pushing their character's flaws too far into cliché.
Advertisement 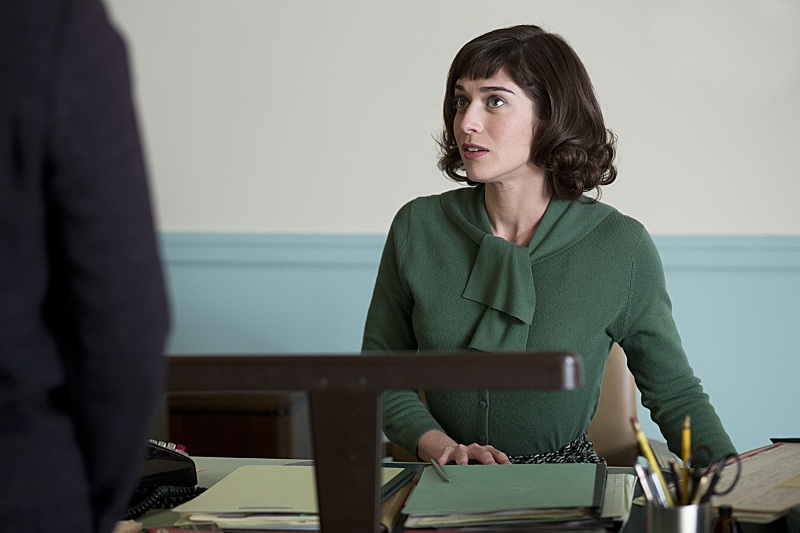 Sheen's well-balanced sense of earnest self-righteousness partners perfectly with Caplan's raw, believable, in-the-moment presentation of a woman who was ahead of her time in so many ways. Caplan wisely doesn't overplay the more salacious aspects of her character, presenting her sexual freedom as confidence more than something controversial or titillating. Virginia Johnson sensed immediately that what William Masters was doing was important and that she needed to commit to it fully for it to work. Caplan understands the nuance of the character in a way that other actresses would have missed. It's a great performance, matched by Sheen's notable skill at making smug characters feel somehow noble despite your strong desire to see them taken down a peg or two. 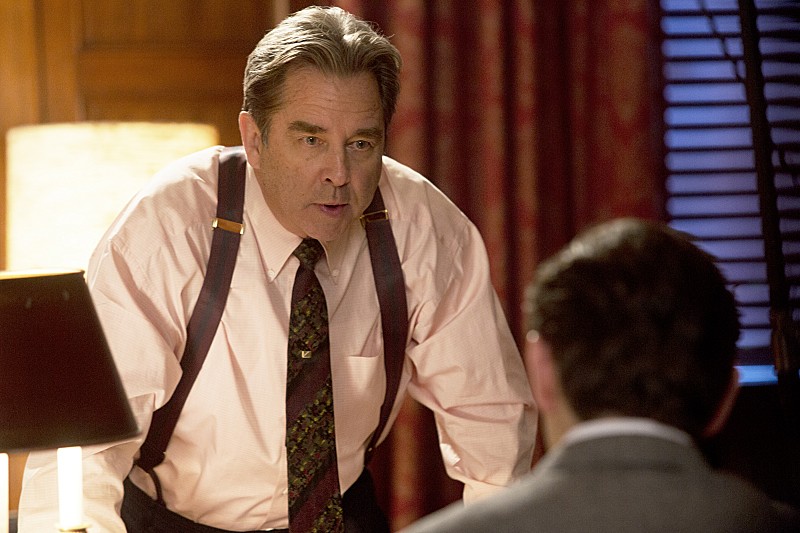 Some of "Masters of Sex" feels a bit too underlined. The score is over-used in when a more natural approach would have been more effective. Important subject matters are often highlighted by composition in maudlin ways like the tinkling piano that kicks in when Dr. Masters realizes a patient is being abused. And the number of "This Study is Important!" speeches in the first few episodes could have been cut by at least half. It's almost as if the writers are sometimes trying to convince the viewers that the large amount of nudity and other controversial elements are in the pursuit of something "important," much as Masters had to for his superiors. I also wish that the supporting characters felt as engaging as the leads to start. Bridges is very good and it's always great to see Ann Dowd (who appears in episode four) but the "Pete Campbell" of this show, Dr. Haas, feels more clichéd and less dramatically engaging than the leads. The show works marvelously whenever Caplan and/or Sheen are on-screen; less so when they're not.

As the show starts to settle in (around episode four), it loses a bit of that thematic underlining and only gets richer in terms of character and thematic exploration. Just as "Mad Men" turned from the world of advertising to the personal lives of its characters over the course of that first season, the thematically similar "Masters of Sex" works better as it becomes about the people as much as the subject matter. As Dr. William Masters and Virginia Johnson so importantly proved—it's not about the act of sex itself but the people involved in it.