Short Films in Focus: "The Future is Slow Coming"

One form of short film that never quite earns the respect it deserves is the music video. Many view the music video format as a time-waster, an art form that serves mainly as a marketing tool for the band/singer rather than a piece of cinema worthy of discussion or debate. To be fair, most music videos do have a throw-away, frivolous quality to them, but when a director aims to create something more artful and cinematic, it often gets lost in the constant barrage of performance-based music videos that exist solely to exemplify an artist's persona.

But the long-form music video often showcases a band or artist with high ambitions, often giving the songs more weight and clarity. In the case of "The Future is Slow Coming"—a long-form music video consisting of two songs by Benjamin Booker—it tells a straightforward narrative that brilliantly serves the complexity of the lyrics and the emotional drive of the music. Benjamin Booker, currently a rising star in the music world, creates songs that combine blues with raw, garage rock intensity and with a vocal delivery that sounds ferocious and uninhibited.

Booker also stars in the film, naturally, but takes on the role of a musician travelling through the Deep South in the '60s. For the first half ("Slow Coming"), Booker drives up to a crossroads with no apparent destination. He takes a turn and on his way to a small, rural town, he comes across a grave post. When he arrives in town, he eats at Edna's Diner and notices the deep racial tension between the citizens and cops in this town. He goes back to the crossroads, takes a different path and comes across the same grave post, the same diner and the same problems. This keeps happening and only when Booker gets out of the car to confront the police does the story take a turn.

The second half of the film ("Wicked Waters") explodes with energy when Booker finds refuge and an exhilarating musical release. Here, the film could have switched over into performance mode, but director James Lees wisely sticks to the story and takes the film to a satisfyingly ambiguous conclusion. Lees and Booker are also careful not to spell out any parallels between the actions of the segregated Deep South and the current situations in Ferguson. The imagery itself has enough power to both recall the past and underscore the present as Booker sings, "The future is slow, slow coming."

Period pieces shot on digital video and with a limited budget can be hard to pull off in trying to evoke realism, but Lees and his crew have done a masterful job of selling the time period. Cinematographer Jackson Hunt avoids obvious magic hour shots and instead keeps things gritty, focusing more on the urgency of the situation. Michael Carter's editing has a smoothness to it that makes it feel more like a film and less like a music video.

And then there's Booker himself. Many musicians do their best to try and "act" in their music video and one often gets the sense that they're uncomfortable doing just that. But Booker has a commanding presence and does a fine job of carrying the film. But obviously, it's his music and vocal delivery that commands the most attention. Musicians have it rough today in trying to get their music into the right hands and to try and gain an audience. Every month, there comes a flood of indie bands and singers trying to get attention from the music-savvy, record store-hopping music lovers on the lookout for something new and exciting. "The Future is Slow Coming" is a film that stands on its own as a short, signifies the arrival of a major musical talent and serves as a reminder that smart music video filmmaking is alive and well. 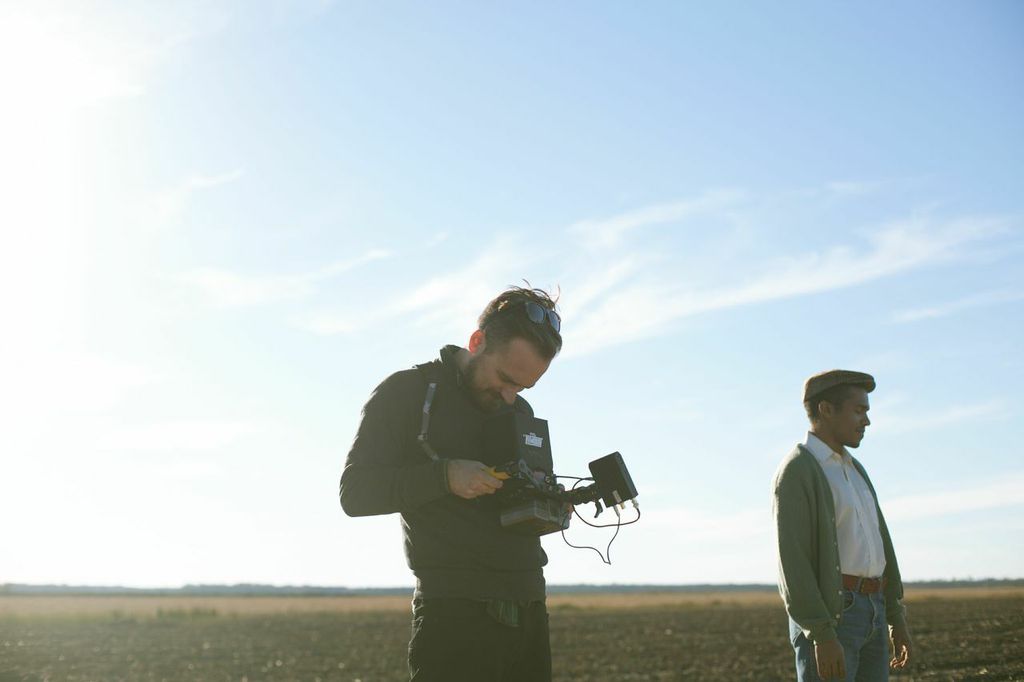 How did this long-form video come about? Did you have the idea or did Benjamin?

JAMES LEES: Ben's record label wanted two videos made, one for each of his next two singles, and they sent out a fairly open brief to directors. In my opinion Benjamin's album was one of the standout albums of the year and his music has such genuine meaning and emotion I knew I had to make these videos. I wrote the story drawing upon things Benjamin specifically sings about in the songs and ideas I am developing for a feature. I then told Ben and the label that I wanted to make a narrative that was spread across two parts, each song soundtracking one half of the story, so it had to be both videos or nothing. Luckily, they were as excited by the project as I was and got fully behind it.

What was the biggest challenge in recreating this time period?

I'd definitely say trying to do it on the small budget we were working with. We shot down in Louisiana where I luckily have the most incredible team who worked complete miracles, as they do every time. Finding the right locations was tough, we needed whole streets to look authentically early 1960's without any tell tale signs of modernity and when you don't have a budget that can be very hard! But as you can see in the film, Louisiana offered up some perfect examples of towns and diners frozen in time.

With the actions that take place here, one could easily draw a parallel to what has been going on in Ferguson. Was that the intention?

Ferguson and recent events such as the tragic deaths of Eric Garner and Tamir Rice were a direct influence on wanting to make this film. Many of the protests now synonymous with Ferguson are used throughout the film to make the direct link between the past and the present. As a society, we are caught in this endless loop of violence and tragedy, repeating the mistakes of our past and not fulfilling the potential of our future. 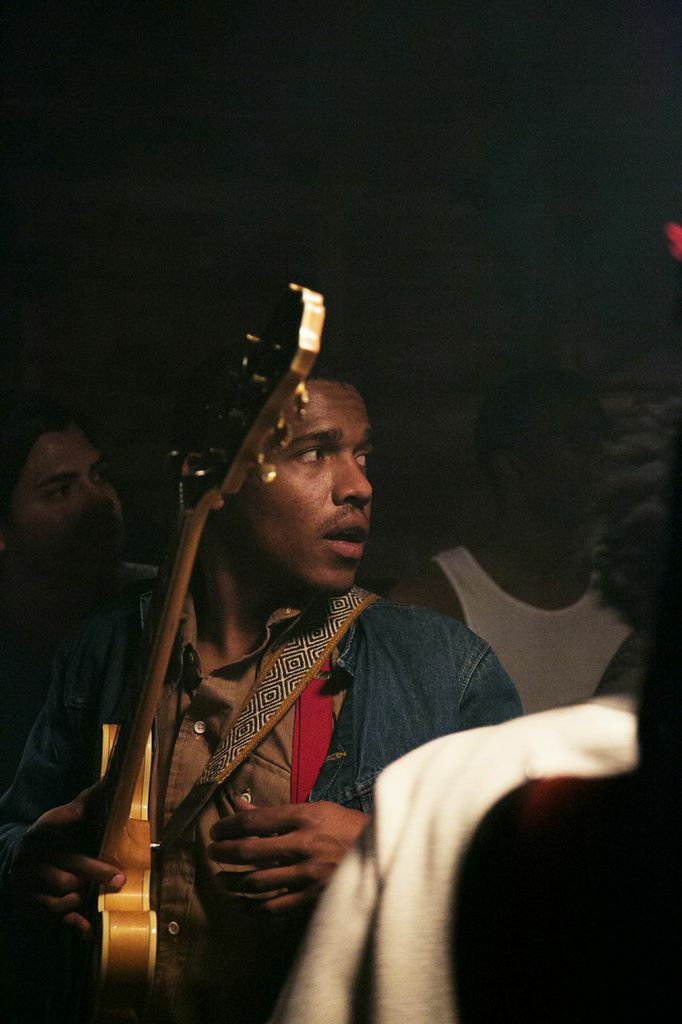 I feel like most directors would have cut the film off when Benjamin finds refuge in the club and starts playing as though his life depends on it. But this video ends on a more ambiguous note. Can you elaborate on that?

As the story is based on the concept of a constant loop, I wanted to ensure the end of the video did not have traditional closure. There are no easy answers and currently no solution to the problem has been found, so the end of the film had to be equally ambiguous. We actually see the black car that confronts Benjamin in the final scene several times throughout the film and it draws on mythology from local Louisiana Voodoo and the Delta Blues players, someone or something potentially controlling and influencing things in both life and death.

I think music videos have gone through a complete reinvention, although they are not available on TV as much as they used to be they now find a much bigger audience than ever before via online channels. It has become a hugely influential part of creating how the public perceives an artist. People want and expect more than just the music now and music videos are a big way for the artist to connect with their fans and reach out to new ones. The songs, the videos, the live experience, all have to stand out from the crowd and the right video is more important than ever before.

I am very lucky to be able to keep making music videos and mix the bigger budget pop videos with lower budget but more creatively free projects such as this. I am also continuing to develop and work on my film career. I have always had fantastic support from the UK film funding schemes and my fourth funded short film, a 22 minute drama shot in Scotland about four teenagers learning to adapt to an empty future alone, will be coming out this summer. I hope to then find US funding for a feature I am developing that explores early 20th Century Afro-American lives in the rural Deep South which, much like the Booker video, combines elements of social and magical realism to tell a touching human story that draws upon local myth and legend.