Short Films in Focus: One Cambodian Family Please For My Pleasure

For this month, in honor of Mother’s Day, we’re looking at A.M. Lukas’ “One Cambodian Family Please For My Pleasure,” an immensely charming short film starring Emily Mortimer. She play Hanka, a Czechoslovakian woman who has made her way to Fargo, North Dakota as a refugee and now hopes to pay it forward to Cambodian refugees by doing what she can to offer them the kind of life she has today, albeit in a part of America that might not be the first choice of anyone looking to settle here.

The story takes place in 1981 and is presented as a letter to an organization that helps with assimilation and transition of refugees to the United States. Hanka plays up the strengths and charm of Fargo, ND while the film comically contrasts everything she points out. When she boasts how welcoming people of Fargo have been to outsiders, we see blonde kids asking Sicilian kids on the playgrounds, “Are you a negro?” When it comes to the subject of weather in Fargo, Hanka exaggerates the fact that they also have warm summer months. Honest, they do. At one point, the letter turns personal and it feels more like Hanka is addressing the viewer and not the organization when she speaks of her Sicilian husband who has lost interest in their marriage.

Lukas’ film itself is a personal story, as she based it on her own mother who escaped persecution in Czechoslovakia. Mortimer makes Hanka a tender and loving character who has the best of intentions, and knows full well she has an uphill battle to convince whoever is in charge that Fargo is indeed a perfect place in which to settle. On top of that, she has the daily struggles any mother has in this region. Hanka is very much aware of her predicament, but remains steadfast and enthusiastic about helping others. Mortimer perfectly personifies Hanka and makes her a character we could very much invest in if this were a feature.

Lukas has spoken to the timeliness of this film, given the refugee crisis in this country and all over the world. She is smart to make this a comedy, though, as we sometimes forget that a film does not have to be biting, satirical, or deadly serious in order to present a serious subject. “One Cambodian Family Please For My Pleasure” is a must for fans of Wes Anderson, Alexander Payne and anyone who has had an idealistic mother, particularly in the Midwest.

The film presents Hanka’s letter about Fargo in one way and the real Fargo in another way (or maybe just a little slightly off). Is the point of view all Hanka’s, or is some of it you contrasting with your mother’s writings (if in fact, she wrote this kind of letter)?

My mom never wrote a letter. That was an ingenious narrative device that I stole from Alexander Payne short film! Payne's been a huge influence on my work for years, in that he's a writer/director with a very specific voice, one that I immediately felt a connection with when I saw "Election" in 1999, long before I knew that he, like me, is a first generation American who grew up with European parents in the heart of the American midwest. I love discoveries like that, when you realize certain obsessions or fixations … there was something at play that you weren't aware of at the time. I think it's so important as a creative person and just in general, to allow yourself to follow your curiosity; to allow obsessions to arise and not always question if they're leading somewhere. They are.

For the most part, the rest is true. My mother is a Czech refugee who did do a lot of work with Cambodian refugees in Fargo, North Dakota in the 1980's. She was at one time, the "head of the assimilation committee" of our church's volunteer group. This story stemmed from my memories of being a toddler wandering around grocery stores and efficiency apartments with families of Cambodians who were basically in varying states of shock, watching my mom show them Fargo, how to choose the best produce and work a dishwasher.

I think the irony you see in the film (what Hanka says about Fargo vs the reality the audience sees) stems from a real quirk in my mother's personality where she wants things to be rosier than they are. It was a charmingly maddening personality to grow up with. She's sort of an idealist to the point of delusion.

Has your mother seen this film? If so, what was her reaction?

My mother has seen it and is, I think, a combination of embarrassed and proud. My whole family has seen the film and I think for me what's rewarding is that it seems they all love the fact that this very specific time in all of our lives is now kind of trapped in amber, captured for posterity. Most of the jokes in the film we've been telling people for years whenever our upbringing comes up. We moved away from Fargo in 1989, so for the rest of our lives our time there became this interesting nugget of history people were surprised to hear. So few people from the east coast have visited Fargo ... it's like saying you're from Antarctica or something. People always seem to want stories--it's like we came from the moon. So a lot of what you see in the film are kind of inside family jokes that really happened. All the "are you a negro?" questions and the peeing the pants while wearing so many layers for warmth … that stuff is all true.

How did Emily Mortimer get involved?

Emily got involved initially when I met her through a filmmaking program through the Tribeca Film Institute. What's extraordinary though, is how deeply she loved and believed in the project to the point of being its central, sort of lynch pin figure both in front of and behind the camera. It was 2015 when Emily agreed to star, and we had financing and an institute behind us, as well as a production company. Just as we were about to go into production, though, I got extremely ill and couldn't make the film on their timeline. It was a life or death deal. Luckily, I fully recovered, but in late 2016 when I emerged from the rubble of my own health emergency, the financing, the institute, and the production company were all nowhere to be found. The minute Emily found out I was healthy, she insisted we make the film. I was shaky about the prospect of jumping right back into directing. And Emily wouldn't take no for an answer. It was such an incredible, unlikely scenario.

In a business where (as an unproven writer/director) you can hit your head against a wall for years trying to get something made, to have a bankable actor who absolutely did not need to be there, be the driving force in terms of putting the pieces together was absolutely extraordinary. To me it was such a beautiful reminder of how people behave when they're in something for the right reasons. Emily truly loves telling stories that she believes should be told. Simple as that. It was an artist feeling passionate about something and rallying those around her (including the writer/director!) into making it happen. In this case, the artist happened to also be a movie star.

What can you tell me about the home movies at the end?

The home movies were taken in the early 1980s on a super 8 camera. They are all images of my siblings and my mother in Fargo, North Dakota, roughly around the time the film is set. Us kids biking and toddling around in front of the house we lived (which was the house in the film), my mom shoveling snow in our driveway (the same driveway from the film), us running around in front of our elementary school (the same elementary school from the film).

I just couldn't believe that 1.) I had the footage that matched the locations we shot for the fictional film, and 2.) that I was given the opportunity to make the film in such a true, almost indulgent way--meaning that I wasn't faking one location for another; I wasn't shooting Long Island for North Dakota, I was shooting Fargo for Fargo. I was shooting my house for my house! So few filmmakers ever get to go that deep in terms of allegiance to their memory. Not only did I bring suitcases full of old stuff I still had from our Fargo house (the giant dirty rug on the wall of the living room) but my production designer Amy Williams was scouring thrift stores in Fargo to occupy the house interior and I swear she found some stuff that actually belonged to my family from back in the day. There was a cassette tape storage thing that was just way too familiar. I so loved the idea of some item like that floating from thrift store to house and back to thrift store, ending its journey in a film about the house it used to live in, the whole thing turns my brain into a delightful pretzel. 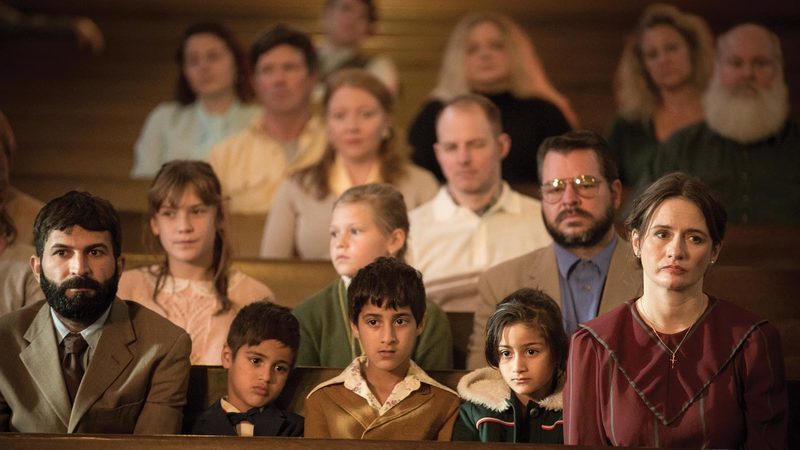 You mentioned in the press kit that the film has a timeliness to it, given Trump’s policies regarding refugees and immigrants. Was that one of the main catalysts for making this film?

The current political climate, amazingly, had nothing to do with the initial spark that brought the film into existence. I wrote the film during the Obama administration, long before our present would even be imaginable to most. At the time, I just wanted to write something about what I knew, and I knew this odd little world of my early childhood.

It's one of those incredible things that happens often in art and life if you pay attention: things happen exactly when they're meant to. If I had managed to shoot this screenplay any earlier than I did, it wouldn't have had nearly the same resonance it has today. It's so beautiful when you notice how things line up. I wish we didn't have the situation we have on our hands now, in terms of the ideological division of our country and the human rights atrocities being committed by the current administration's practices surrounding refugees and immigrants. But the situation is there, and I'm glad the film can provide, in its quiet way, an answer to all of it. The answer being that which I see as a baseline truth of existence: we're all part of the same whole.

Many directors might not have thought about presenting this story in a humorous light. How important was that aspect of the film to you while making it?

Humor for me is everything, in life and in storytelling. I love that life is just an endless play between the devastating and the funny. In life there is inevitable tragedy. I mean, every single one of us is going to die. It's hilarious that we all walk around like it's not going to happen. Life is basically a dance between light and dark, and I love that muddy place in between the two … where often, the funniest moments come from the darkest depths of despair. I think that's kind of the cosmic joke of life. You can't truly laugh if you haven't experienced pain. Laughter comes when you realize you're not alone in that pain/embarrassment/fear/anxiety/shame, as much as it can feel like you are. Laughter is very often to me, the moment the light pierces the darkness. I live for that. So I'm always trying to make work that recreates that element of life.

I'm working on a number of projects. Writing takes me forever.