One of the greatest of all film actresses, the Italian Anna Magnani made roughly fifty or so pictures, but she is best known in this country for just a handful of credits like “The Rose Tattoo” (1955), which won her an Oscar for Best Actress, the neo-realist classic “Rome, Open City” (1945), and Jean Renoir’s sublime “The Golden Coach” (1952). It has always been difficult to see her other work, and so Lincoln Center’s retrospective of nearly half of Magnani’s movies, which runs from May 18-June 1 (and all in 35mm or 16mm prints) provides a rare opportunity to experience the full range of her talent and her woman-of-the-people gusto.

Magnani was born in 1908, and she endured a lonely childhood that included some convent schooling in Rome. As a young woman she supported herself as a nightclub singer and had started working on stage when she made her official film debut, “The Blind Woman of Sorrento” (1934). At 26, the huge-eyed Magnani is beautifully dressed and made up in period costume for this debut, and she commands the camera with her reproachful look and the expressive solidity of her hand movements (Magnani’s hands will often move down into a prayer pose above her waist). She is a little green here in this first feature, slightly pushing her effects instead of letting them unfold naturally, but already she is a slashing sort of presence.

Magnani married the Italian director Goffredo Alessandrini in 1935 and went into semi-retirement, only taking small roles. In Alessandrini’s “Cavalleria” (1936) she is just glimpsed very briefly singing in long shot, and the rest of her parts in the 1930s were similarly inconsequential until she got a good but small role in Vittorio De Sica’s “Teresa Venerdi” (1941). As stage star Loletta Prima, Magnani is very funny when making indifferent movements during rehearsal for a tacky musical. Though she’s barely in this movie she manages to steal it anyway, displaying admirable technique as she speeds through her scenes and getting comic mileage out of the way the low-class Loletta puts on airs.

The interesting thing about Magnani in early 1940s comedies like “The Peddler and the Lady” (1943) and “The Last Wagon” (1943) is how she gets her biggest laughs by holding back, by being watchful and imperious, and by making dry remarks. (“Knock it off,” she says calmly, her face deadpan, when a barber feels up her breasts in “The Peddler and the Lady.”) She missed out on the chance to play the lead in Luchino Visconti’s “Ossessione” (1943) due to pregnancy and chose to have her son Luca even though it was not Alessandrini’s baby (she stayed married to him until 1950).

Before shooting started on Roberto Rossellini’s “Rome, Open City,” her son Luca was stricken with polio and lost the use of his legs for life. At first Magnani wanted to abandon the film to take care of him, but she resolved to make enough money to protect Luca and soon returned to work. As the pregnant Pina, Magnani is shot down by German soldiers 56 minutes into “Rome, Open City,” which became a landmark and made her famous outside Italy. “Francesco!” she cries, running toward her fiancée after the Nazis have arrested him; when she is shot her body lies still in the street, her skirt above her knees so that the tops of her stockings are visible.

“When I hear music, I lose all inhibition,” Magnani says in “Down with Misery” (1945), but of course the joke is that she is the least inhibited of all performers, especially when she gets worked up. She had a new sort of power on screen in the mid-1940s, and she made small moments—and small movies—momentous. The women Magnani was playing became multi-dimensional, abundantly faceted, with vivid behavior unfolding and then unfolding some more before our eyes in all directions possible. 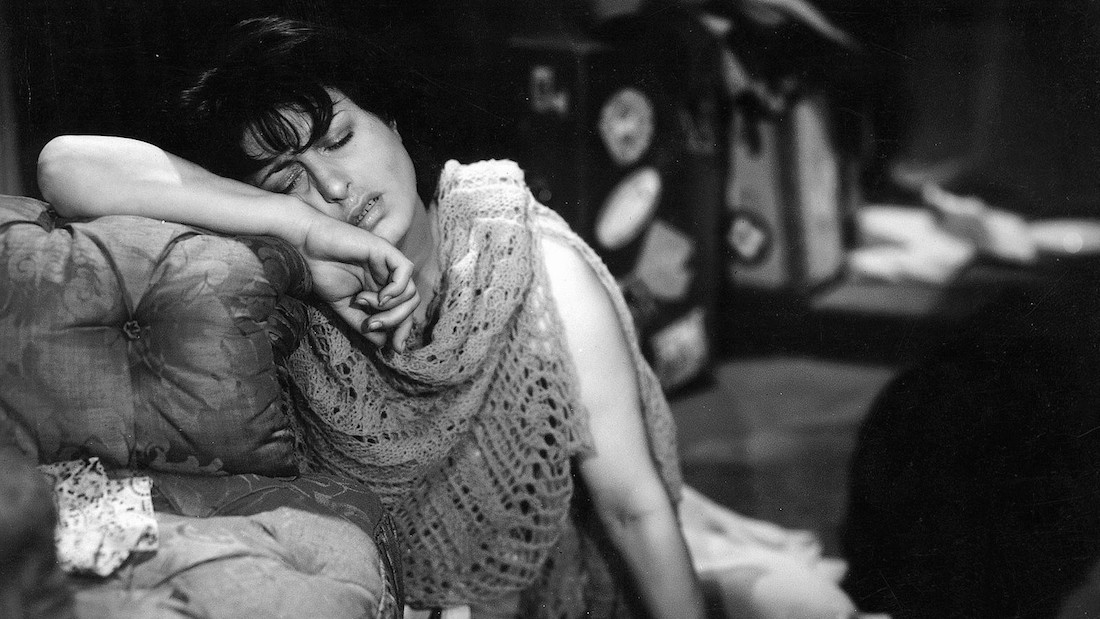 Rossellini, who had become her lover, offered her a showcase called “L’Amore” (1948), which was comprised of two short films, “The Human Voice,” a Jean Cocteau play where Magnani played a ruined and passive-aggressive lady speaking to her lover on the phone for the last time (“Pronto!” she keeps shouting), and “The Miracle,” where she played a half-mad goat woman who is convinced she is carrying another Christ child after an encounter with a sly wanderer (a young Federico Fellini, who also wrote the story).

Magnani is intensely emotional and touching in both of these shorts in “L’Amore,” and in very different ways: tightly wound and desperately sophisticated yet primal in the aria of “The Human Voice” and then poignantly simple-minded yet understanding in “The Miracle,” which ran into a lot of trouble with US censors. Magnani reaches a religious peak of emotion and insight in “The Miracle” when a jeering crowd crashes a large bowl on her head and she just quietly says, “God forgive them, for they know not what they do.”

Magnani liked to stay up all night and sleep all day, and she liked dogs because unlike people, she would say, dogs never betrayed you. She was usually jumpy, tired, excitable, and cranky, and had immense fights with Rossellini— she once tried to run him down with her car until they both started laughing. Magnani was wounded once again when Rossellini left her for Ingrid Bergman, but the years from 1950 to 1962 saw her best movie work, and Magnani was not the sort of person to welcome pity; she always reacted to setbacks with anger and defiance. “In two hours of Anna there’s everything,” Rossellini said. “Summer, winter, tenderness, fury, jealousy, fighting, break-up, goodbye, tears, repentance, pardon, ecstasy, and then, once again, suspicion, anger, blows.”

Magnani worked for Visconti in “Bellissima” (1952), as a mother who wants to get her daughter into movies. “After all, what is acting?” she asks herself in that film while staring in a mirror. “If I pretended to be someone else, I’d be acting.” There comes a point in “Bellissima” where Magnani has to fight against her husband, who disapproves of what she’s doing with their daughter. The exciting and ambiguous thing in this scene is how Magnani clearly shows us that this woman is acting for effect for her husband (she drops her upset instantly after he leaves), and yet we know that her emotion is genuine.

In her most ideally balanced vehicle, Renoir’s “The Golden Coach,” Magnani is filmed in color and she proved once again, as she had in “L’Amore,” that she is someone to make a film for and about. This is one of the best movies about both the loneliness and the glory of the life of an actor, and the fullness of their response to life. Laughter and anger always overtake Magnani on screen, and so watching her laugh or get angry is like listening to a singer with a voice that goes the highest up and the furthest down, like a Maria Callas living by her wits. Magnani acted in English for this Renoir masterpiece, but she turned down the stage version of “The Rose Tattoo,” which Tennessee Williams wrote for her, because she felt her English was too shaky. 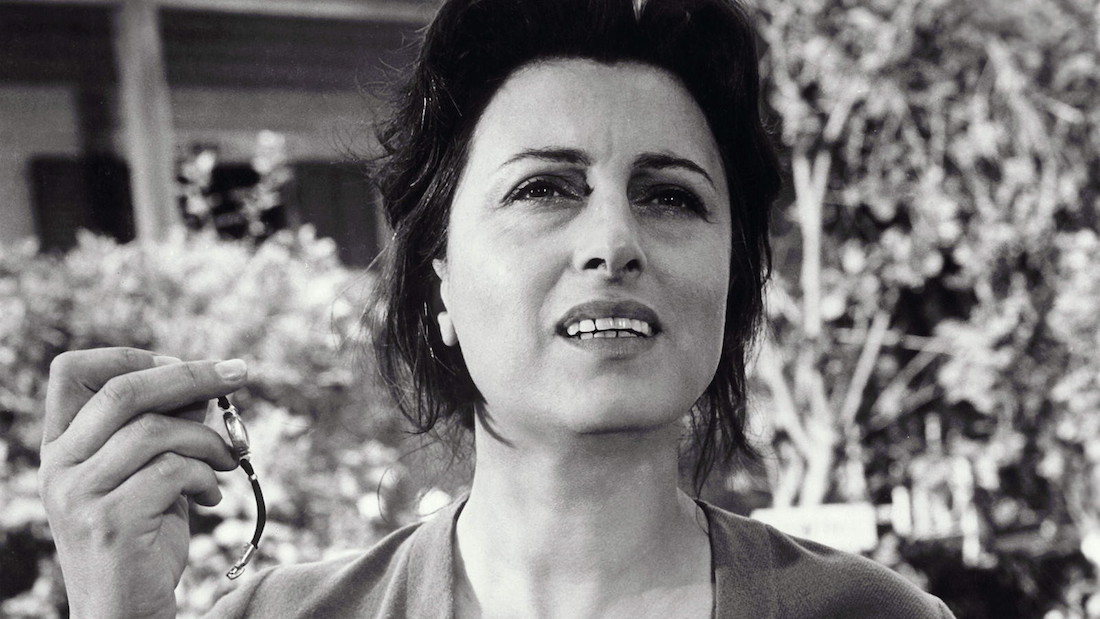 Magnani was persuaded to appear in the movie of “The Rose Tattoo,” and the result was another picture in which she really is the entirety and the essence of everything on screen; the director Daniel Mann lets her scenes play out in very long takes so that we can ride the rollercoaster of Magnani’s emotions and all the conflicts she is dramatizing. As Serafina Delle Rose, a woman sexually obsessed with her husband, Magnani has several memorable moments, like the scene where her neighbors come to tell her that her husband has been killed and she cries, “Don’t speak!” and then keeps repeating “Don’t speak” in a higher, strangled voice as she crumples down to the floor.

In the scenes of Serafina’s neurotic, slovenly widowhood and gradual coming back to life, Magnani does a master class for acting in the moment, letting emotions seize her and play out to their full, which is why her rapid changes of mood can be so funny. She makes Serafina smart and limited, lusty and prim, wrongheaded and closed yet wayward, too, ready to be opened, which comes across in the many different ways she cries the word, “Please!”

And Magnani brought the same conflict and hope to her other Williams movie role, Lady Torrance in “The Fugitive Kind” (1960), in which she acted with Marlon Brando, listening to the far-out frequencies he is accessing and then responding to them in an overwhelming way. Some people might think what Magnani does is too much, too extreme, but maybe that’s because they are afraid they could never endure such extremity in living themselves. Somehow her own earth mother Italian woundedness was meant to meet Brando’s boyish woundedness and adolescent American anger.

In “Nella città l’inferno” (1959), a women’s prison movie, Magnani is at the height of her powers, controlled yet spontaneous, using her explosive laugh to cover a lot of emotional territory. In her finest scene here, she shakes and shimmies down the cellblock and cries, “Rock and roll!” over and over again, giving herself over at age 50 to the pleasure of the new youthful and rebellious music. She gave her funniest performance in Mario Monicelli’s elegantly designed comedy “The Passionate Thief” (1960), where she played a tacky Cinecittà extra who goes out on New Years Eve in a blond wig. In that movie Magnani flung herself into the lowest physical comedy while peppering the dish of her comic work with sarcastic asides and dry worldly wisdom. 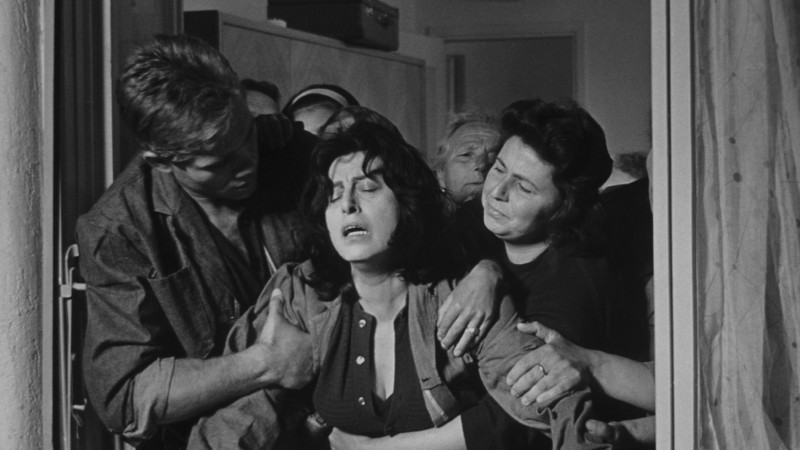 Magnani’s last major role came in Pier Paolo Pasolini’s “Mamma Roma” (1962), where she played a streetwalker. She commanded several very long tracking shots, ending one of them with an indelible line that she directs to Jesus up in the sky: “Explain to me why I’m a nobody and you’re the king of kings?” Her work rate lessened after that, though she returned for a series of films for Italian TV in 1971 and then bowed out with a cameo as herself in Fellini’s “Roma” (1972). The director catches her after a night on the town and tells her that she is the very spirit of Rome. “Oh, you think so?” she asks lightly, laughing in his face before closing her door.

When Magnani became ill, Rossellini got back in contact with her (they hadn’t spoken in 13 years) and sent a note reading, “If you need me, call.” She immediately contacted him, and when he saw her she said, “Spit on my hand, buddy. Sit down. Listen. I’m really sick, seriously sick, but dying pisses me off, so you have to stay here and stop me from dying.” He told her, “OK, I’ll stay here and I won’t let you die.” Rossellini stayed with Magnani for 45 days, and when the time came he said, “I accompanied her to the other side without her realizing she was dying.” At Magnani’s funeral, 150,000 or so people came to pay tribute, and they applauded when her casket was carried out of church. She was buried in Rossellini’s family tomb.

No one had been more alive than Magnani was, and that enormous vitality of hers is still there to be wolfed down in her most famous movies and enjoyed even in her smallest comedy programmers. They called her “La Lupa,” or “the she-wolf,” and that fierceness is her legacy, that hope that still burned in her eyes no matter how many or deep her disappointments.

The Anna Magnani retrospective runs from May 18 - June 1 at the Film Society of the Lincoln Center in New York City. The retrospective will also be traveling to the Gene Siskel Film Center in Chicago, the Berkeley Art Museum and Pacific Film Archive, the Castro Theatre in San Francisco, the Museum of Fine Arts, Houston and The Wexner Center in Columbus. More information can be found by clicking here.
Advertisement