On February 17, 1965, Joan Rivers appeared on The Tonight Show, her first time with host Johnny Carson (she had been on the show before when Jack Paar was host). After Rivers completed her set, Carson said, on-air, to all of America, "You're gonna be a big star." She would go on to be a fixture as a guest on The Tonight Show for many years, and then, in 1983, Carson offered her a permanent guest-host spot. To say she was a pioneer doesn't even begin to cover it. Today, 30 years later, the landscape of late-night talk-show hosts is still almost 100% male. She held that torch out, the industry let it fall to the ground and has yet to pick it up. Famously, the relationship with Carson was shattered when Joan Rivers went to Fox with her own show (another pioneering moment), but she still spoke often and with great gratitude for Carson's encouraging and prophetic words.

The daughter of Russian Jewish immigrants, Joan Rivers grew up in the lean Depression years, and it was assumed that she would marry well. That was seen as her only job. But Joan Rivers had other plans. She saw herself, primarily, as an actress, and she did appear in plays, but working comedy clubs helped pay the bills. It was as a comic that she made her name. She worked, almost nonstop, for over 50 years. Her work ethic should be studied in a lab. There have been times when the offers dried up, when she couldn't get arrested let alone hired. The "feud" with Carson (he never spoke to her again) led to her being basically shunned by NBC. She didn't appear on The Tonight Show again until Jimmy Fallon's first episode as host in February of 2014. To those of us who grew up watching Joan Rivers on The Tonight Show, it was an extremely satisfying moment.

There were other female comics, women who told the truth about their lives and made audiences laugh doing it, women who challenged the stereotypes, who challenged what women were "allowed" to say onstage: Phyllis Diller. Elaine May. Carol Burnett. But as Kathy Griffin has observed, the list is a very short one, and you can count the names on one hand. Joan Rivers told the truth about her life, she talked about marriage and sex and feeling insecure. She talked about bodily functions. She ranted and raved about everything she hated. Some of her jokes arrived like sucker punches from an inappropriate alternate universe where such comments were allowed. 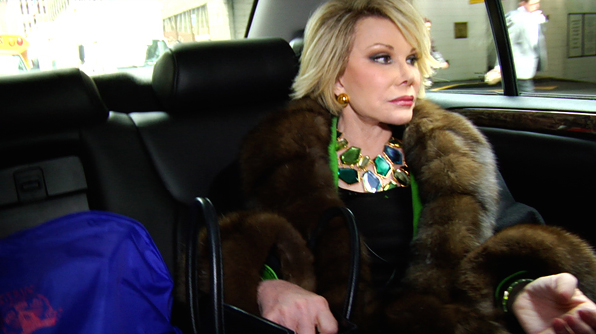 In his review of the wonderful 2010 documentary "Joan Rivers: A Piece of Work," Roger Ebert observes: "The way she is funny is, she tells the truth according to herself. She hates some people. She has political opinions. Her observations are so merciless and her timing so precise that even if you like that person, you laugh. She is a sadist of comedy, unafraid to be cruel — even too cruel. She doesn't know fear. She seems to be curious about how far she can go and still get a laugh. That must feel dangerous on a stage with a live audience. Maybe she feeds on that danger."

In that same documentary, Rivers said, "Anger fuels the comedy."

Her early material was shocking at the time; she was admitting to things that women just didn't admit to normally. If you search out clips of those early appearances, the laughter that erupts from the audience (male and female) has the explosive quality of catharsis. Her comedy had the indelible stamp of truth and people recognized it as such immediately. The laughter feels like recognition. She was expressing the absurdity of their own lives. If it was sometimes mean, then she was just speaking what many feel and think when they are alone. She had the courage to say it publicly.

In 1965, she married Edgar Rosenberg (it was her second marriage, the first one lasting only six months). "Edgar" was featured often in her comedy, as was every other aspect of her life. He committed suicide in 1987, leaving Joan devastated and destitute financially. She had to claw her way back to a career after that. Nobody wanted to see a comedian making jokes after her husband's suicide. But Joan Rivers was a single mother who had to make a living. She couldn't afford to be picky. She appeared on "Hollywood Squares." She sold jewelry on QVC. She wrote books (12 best-sellers). People often snickered and sneered about her choices. It didn't stop her.

Her extensive plastic surgery, unfortunately, dominated much of the commentary about Joan Rivers. It's often the first thing people say when her name comes up. At the 2009 Comedy Central roast of Joan Rivers, her plastic surgery was almost the sole topic of the entire evening, as though there was nothing else to say about Joan Rivers. Of course she had too much surgery, and perhaps it revealed that she was insecure about her looks, but wouldn't we already know that from her blistering lightning-speed wisecracks about herself? Taking her career as a whole, the fact that she had a lot of plastic surgery is the least interesting thing about her.

Joan Rivers' red carpet snarking got her into a lot of hot water, especially in our extremely-sensitive social media age. She has been called out for being "mean" and criticized for body-shaming cruelty. Joan Rivers had been doing "insult comedy" from the beginning of her career, just like many of her male contemporaries. It rubbed some people the wrong way.

However, Lena Dunham, one of Joan Rivers' most recent red carpet targets, had this to say on Twitter when word came of Rivers' illness:

"We can't lose Joan. All love and healing wishes to Her Majesty Joan Rivers—being ripped a new one by you is an honor to be treasured."

All of this, however, brings up another important point: Joan Rivers, in her 80s, mind you, was still ubiquitous, seen on television on a weekly basis. Recently, I spoke about Joan Rivers with Mitchell Fain, a performer with Second City (where Joan Rivers had done a brief stint as well), and he said, "She’s a legend. She changed the game. She’s a trailblazer who’s still working at a certain level at her age. How many people of her generation have their own television show? Don Rickles doesn’t have his own television show." The fact that people were bitching on Twitter about whatever inappropriate thing Joan Rivers said just goes to show you how omnipresent (and relevant) she still was.

There have been times she went too far. More often than not, she has refused to apologize. Her comedy was equal-opportunity mean, and she included herself in her list of targets. It has been especially interesting to see the reactions from comedians, in particular, to the news of her illness. They have taken to Twitter, literally begging her to get better, the undercurrent being, "We need you, Joan, we still need you."

Joan Rivers didn't just open the door for other women. She gate-crashed the Boys Club, demanding a seat at the table. And then when people asked her to leave, she refused, and put her feet up. Lit a cigarette. Asked for a drink. The level of tenacity that that required on her part, the sheer chutzpah, the ambition, is rare and admirable. For whatever reason, Joan Rivers had a knowledge, deep-down, and early on, that she deserved to be there with everybody else: as long as she made people laugh, as long as she worked hard, there was no reason, no reason at all, for her to be left out of that funny people party.

Comics will be stealing from Joan Rivers for generations to come. Her legacy cannot be measured.