How to Live in This World: On “The Brother From Another Planet”

A hand reaches out to touch a wall in the main building on Ellis Island. A man (Joe Morton) is immediately jolted back by all the voices. The man who can literally hear the past is an alien, and a former slave, trying to outrun a pair of intergalactic slave catchers (David Strathairn and John Sayles, the latter also the film’s writer and director) who have followed him to Earth.

The movie is the marvelous “The Brother From Another Planet,” 33 years old but still current. Sayles’ sci-fi film is less concerned with effects and hero’s journey bravado than it is with faces, communities and the systems of oppression in which we live, trying to navigate or fight them every day.

The alien is mute and never named; he is called “Brother” by other characters. Joe Morton’s extraordinary performance anchors the film, captured in a mercurial shift of the eyes from apprehension to curiosity to wonder at his strange new surroundings. He finds refuge in Harlem and his main hangout is a local bar; two regular bar patrons (Bill Cobbs and Leonard Jackson) nearly steal the film, offering a running commentary on the odd newcomer and the increasingly strange series of events that seems to follow him. He rooms with a single mother and her little boy, sleeps on the street and finds work repairing machines at an arcade. Each little piece of his daily life a wonderful short film in itself. In particular, a scene between him and a moody teenager at the arcade, where he uses his powers to increase the game’s speed and give her the thrilling challenge she’s been itching for. 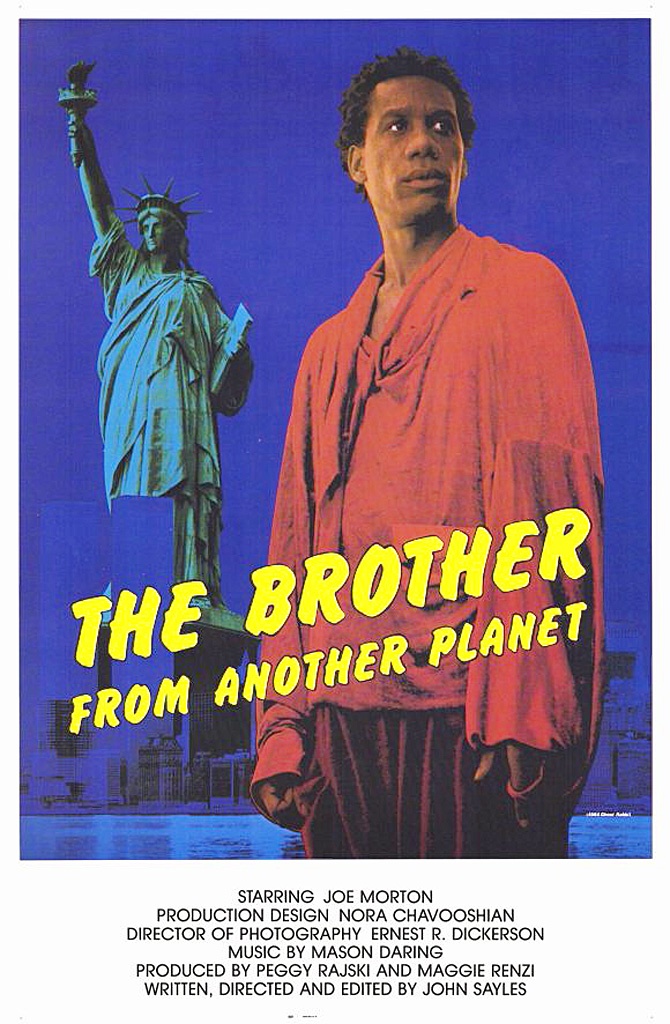 The film is beautiful to look at too, shot in the warm golds and purples of twilight in New York City. Sayles and cinematographer Ernest R. Dickerson take advantage of that certain slant of light that can turn a city space from inviting to sinister in a moment. And the scrappiness of the film’s few fantastical props and effects are a nod to Sayles’ B-movie roots for New World Pictures, something current sci-fi films could do well to remember. For example, “The Brother From Another Planet” knows the enchantment in a well-played card trick. A scene where a street magician (Fisher Stevens) tells a story for Morton with a deck of cards is another one of the film’s highlights.

“The Brother from Another Planet” is very much a needed film at this moment, precisely because it’s easy to get lost in the weeds of trying to process real world catastrophe through the lens of pop culture. It’s not hard to make memes about “Dumbledore’s Army” or flatter yourself Katniss of “The Hunger Games.” We all hope to be the kind of heroic protagonist who can save the world and bring down a corrupt system. But fantasies of swooping in to save the day meet the brick wall of how frustratingly slow progress is, how precarious it is.

That's where this film’s achievement becomes more apparent and rewarding; “The Brother From Another Planet” is not a blueprint on how to save the world, but a warm, humane guide on how to live in it. Not passively accepting injustice and looking the other way, but rather how to get through the day-to-day business of living and surviving: How to know who to trust and who can be counted on; How to send a message for help; How to find and build communities. That the cast is predominantly people of color is no coincidence, where until recently questions of survival in oppressive systems, or fun bits of escapism for white audiences, have become an uncomfortable reality. The film is vital in illustrating how paying attention to, listening to and following POC will be essential in the fight for everyone's future.

And yet the Earth is never in peril in the story: most of the people Morton encounters never learn his secret, and the film is often witty and laugh-out-loud funny. A private universe is spun out in every scene between Morton and another character, little moments that add up to a life—a world worth cherishing and defending. A world that, not for nothing, is composed of strong immigrant communities, from all corners of the Milky Way.