Steak 'n Shake, the Midwestern burger chain beloved by Roger Ebert, is proud to offer table service where its double Steakburgers are served on plates and shakes come in old fashioned glassware. So proud in fact, that they don't do takeout orders inside the restaurant itself (there is a drive-thru, though). But, if you walk into the first Northern California Steak 'n Shake at 362 East Market Street in Daly City, CA about a mile outside of San Francisco, Marco the maître d' is happy to seat you, but he won't take your order.

Steak 'n Shake is bringing a civility to fast food previously unseen in the Golden State. This left some people who walked into the new Daly City location a little confused on Tuesday, November 15, the restaurant's second day of operation. There was no large board behind a counter listing meal deal options. There was just Marco, Lilly the waitress and several other actual human beings that are part of the Steak 'n Shake experience.

I was a little better prepared for the Steak 'n Shake experience than my Daly City brethren, mostly because of the amount of space Roger devoted to praising the chain in Life Itself, his memoir. Roger's "first restaurant meal" in his "third or fourth year of life" was at a Steak n' Shake on Green Street near the University of Illinois campus where his father worked. If Ebert were on death row, he wrote that his last meal would be from Steak 'n Shake as well.

"These matters do not involve taste," he continued. "They involve a deep-seated conviction that a food is absolutely right, and always has been, and always will be. These convictions are fixed at an early age. I do not expect to convert you." 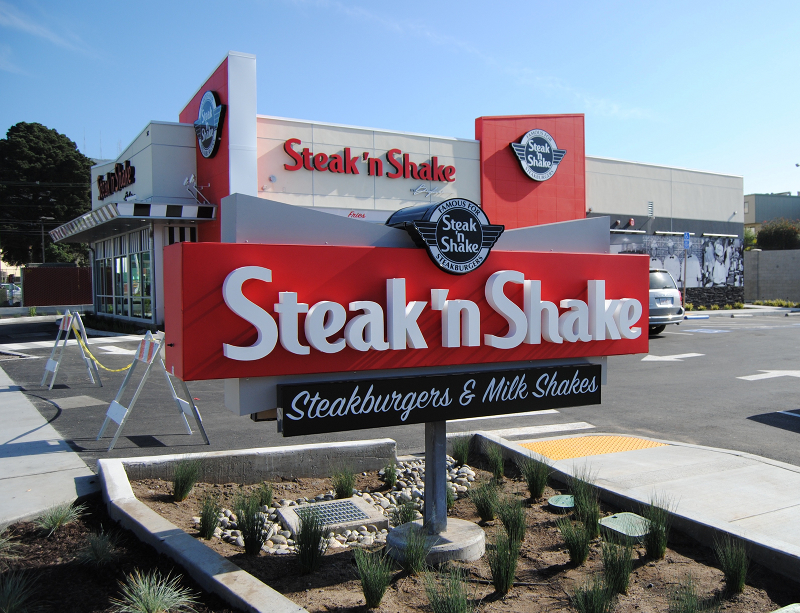 By the time Marco shows me to my seat at the counter of the Daly City Steak 'n Shake, I'm already pushing 50. This is my first time eating at the place Roger calls "the dominant quality hamburger chain in St. Louis, Atlanta, Indianapolis, Houston, Memphis and Cincinnati." For better or worse, my tastes were formed a long, long time ago. As I wait for my order, I think of my nostalgia for simple or even bad food. I remember my family used to go to a now defunct fast food place in nearby Redwood City called the Red Barn, but I only remember the place for its namesake architecture, not its burgers.

At the Steak 'n Shake in 2016, Lilly the waitress walks me through the unfamiliar menu, and takes my somewhat large order with a smile. I'm a little self-conscious at first for ordering the Double Steakburger with fries, a plate of the Chili Mac and a shake. If there's one thing that I share with Roger, it's girth. I can barely fit my gut behind the counter as I cram myself into an unmovable stool, and now I'm the fat guy ordering all the trimmings. Lilly doesn't raise an eyebrow and just asks me if I'd also like a glass of ice water. Thank you, Lilly.

While I wait for my food, I watch as a team of what Roger called "acolytes in ecclesiastical black and white, bow ties and little paper soldier caps" prepare burgers and dogs with crackerjack precision. Burgers are actually fried on a large metal griddle and then served straight to the customer, instead of being stacked up in plastic warming trays for God knows how long like they are at McDonald's.

My shake arrives first. I ordered what Steak 'n Shake calls a side-by-side, where two different flavors of shake are poured into the same frosty glass but not mixed together. My "strawnana" shake is half strawberry, half banana—pink on one side, and yellow on the other—and topped with a generous heap of whipped cream and a cherry. After I harpoon the shake with my straw, my first taste draws from the banana side. But the two flavors start to blend together with each drag off the straw. Each sip is a little different from the last. From this one sampling, I'm willing to go out on a limb and say that Steak 'n Shake is making the best shakes in this part of the 'burbs right now. My declaration may even include all of San Francisco, especially since Joe's Cable Car on Mission Street closed two years ago.

After I finish about a quarter of my shake, Lilly brings me my Double Steakburger, fries and Chili Mac. I sample the Chili Mac first, a dish that Ebert wrote he would serve the Pope if the Pontiff asked him for the best plate of spaghetti. The Chili Mac is a kind of midwestern slumgullion comprised of ground beef seasoned with cloves served over spaghetti in a tangy red sauce. This is sure to confuse Californians even more than the table service. Out here, people think of bent tube pasta when one refers to macaroni—not long noodles. Also, what Westerners call chili is as much a challenge as a meal where habanero and jalapeno peppers are added to generate the right degree of chemical burn. Fortunately, Lilly brought me a bottle of Frank's Red Hot Original Hot Sauce when I asked for it. The Daly City Steak 'n Shake might want to keep some Tapatío or even Sriracha on hand to account for local tastes. 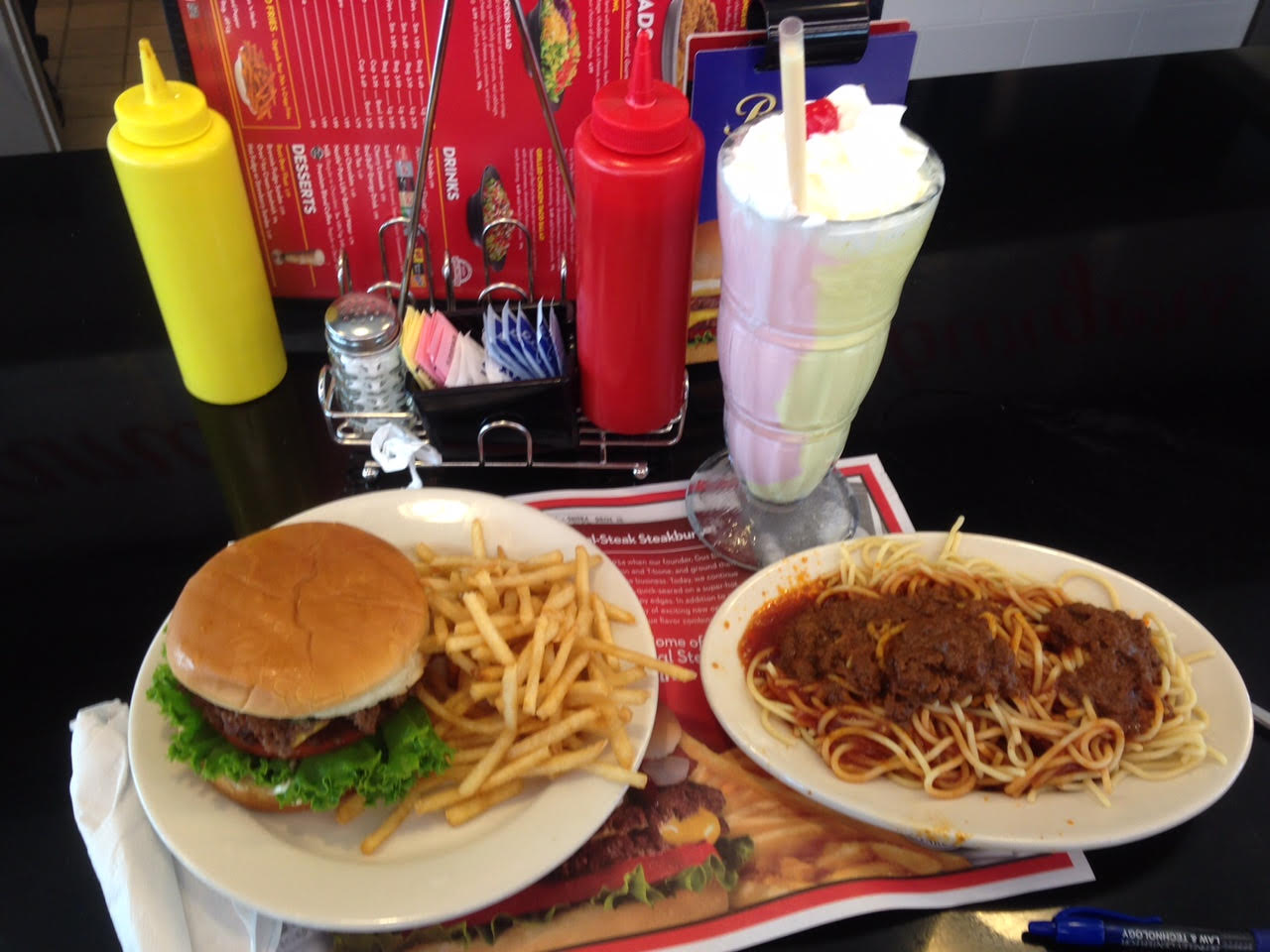 Fries are easy, so I move onto them. They are thin fries that remind me of those Pik-Nik Shoestring Potatoes that come in a tin that I used to eat only on family camping trips. Steak 'n Shake somehow manages the right amount of crispiness without drying them out. In this way, they are superior to the fries at the nearby In-N-Out Burger, that, while made from fresh potatoes cut in each restaurant before going into the grease, are always a bit undercooked unless you order them well-done. Steak 'n Shake's fries are good dipped in ketchup, but even better when I drag them through my plate of Chili Mac, as if that's what the Chili Mac is really for.

The Double Steakburger, the Holy Grail of Midwestern casual dining, is totally solid and far better than anything you could ever hope to get out of the local McDonald's, Carl's Jr., Burger King, Wendy’s or Jack in the Box (Daly City is chock full of the fast food joints that cosmopolitan San Francisco frowns upon). The two slices of dill pickles, cut lengthwise so they cover the entire patty, are a nice touch. In my opinion however, The Double Steakburger does get edged out in flavor by In-N-Out Burger's Double Double, which Roger described as "a drippy, mushy mess on a soft bun." But as he said, "these matters do not involve taste."

"Willoughby, Willoughby, this stop is Willoughby," echoes through my mind as Lilly takes away my plates, and I leave my tip. In the first season "Twilight Zone" episode titled "A Stop at Willoughby," a "Mad Men" era ad exec (James Daly) dozes off during a mid-20th Century train ride and wakes up in a small, idyllic town in the 19th Century. Steak 'n Shake, with its uniforms and decorum from a different era, was Roger's Willoughby—his way to travel back in time like that burnt out adman tripping through "The Twilight Zone." There may have been some additions to the Steak 'n Shake menu over the years, but the experience remains the same.