Does anybody here know what time it is?

Note in particular what I am doing with my hands. Then see the happiness on our faces. This photo was taken when a plaque was placed on the sidewalk during Ebertfest 2010, marking my birthplace at 410 E. Washington Street in Urbana. The woman is Sally Omiston. The Ormiston family (her husband "Ormy" and their two boys Fred and Georg) lived directly across the street.

Sally celebrated her 100th birthday on Feb. 9. I received a mistaken message from Urbana (no doubt from someone who saw "100" under her photo in The News-Gazette and drew a hasty conclusion. I have never been happier to correct a mistaken tweet.

Sally taught me to tell time. Unable to speak, I'm pointing to where a wristwatch goes.

Sally's intervention in my life may have come in the nick of time. I had my appendix removed, and when I returned to St. Mary's Grade School, Sister Nathan did an evaluation to determine if I had lost any speed. She sent a note to my parents: "Roger doesn't know his multiplication tables or how to read the clock."

What grade was I in? Certainly a grade where this raised a red flag. My parents took direct action. On a cardboard that came with a shirt from the laundry, my father wrote out the tables in his sure, strong hand, using the fountain pen filled with green ink that my mother used as a bookkeeper at the Allied Finance.

I was to spend half an hour after dinner every day memorizing the tables while sitting on the living room sofa, while my parents had their coffee and read the Gazette and Courier while firing up their Luckies. The silence was punctuated from time to time by mom or dad, saying: "I see in the paper..." and by my stifled sobs. What other kid ever had such cruel parents?"

It was easier to learn about the clock. Sally had been an elementary school teacher before got married. She brought home a big wooden Playskool clock she placed on her kitchen table between us. Its hands and numbers were removable and could be replaced by the wooden slices of a Pie of Time so that any fool could see that a quarter hour or a half hour had been consumed.

On summer evenings my dad and Ormy would stand on the lawn and talk things over. This was an occasion for Ormy to smoke his pipe.

"The Ormiston Boys are allergic to tobacco smoke," my father told me. "He's given up on smoking his pipe indoors. A pipe smoker loves his pipe. Think how much he loves those boys!"

The Ormiston Boys, George and Fred, were enough younger than me that we existed on different planes of reality. For books of Green Stamps I got two flimsy aluminum bookcases, and stacked one on top of the other inside my bedroom door, so that when it was opened all you could see was a wall of books.

The Ormistons came over to visit one day, and when the boys started horsing around, they knocked into my cases and all my books came tumbling down. Oh, how I hated those boys. 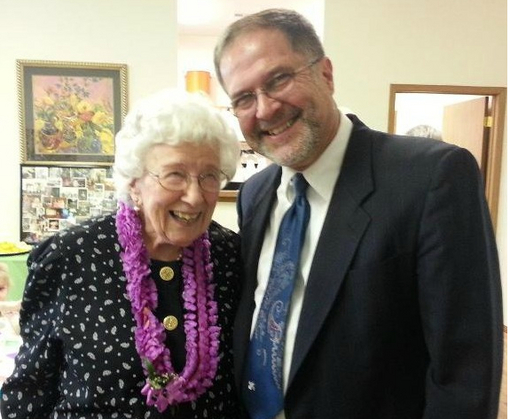 She graduated from LaSalle High School and LaSalle-Peru Junior College. She retired from a career as a teacher in Grand Ridge, Ill., when she was married in 1940.

She is a member of Grace United Methodist Church, the Carle Foundation Hospital Auxiliary and the Champaign County Nursing Home Auxiliary.